Interesting – because prior to now, I don’t remember seeing anywhere that Condo talked about any of this. Condo’s father was not in the Civil Rights Movement, choosing instead to take a back seat. The ethics of that are up to debate…

As well as Condo’s ethics in working for the Bush Administration. While I don’t believe there is any evidence that GW is a bigot, there is more than a little evidence that some of the folks he brought to Washington were and are. The nuances of whether she could have done more not taking the job, or accomplished more by taking the job are also open to debate. Calling Condo a latter day Hattie McDaniels is unfair. Calling her a failure because of her role in a failed Presidency..isn’t.

I think this reaction is because of he Trayvon Martin murder. Like the George Zimmerman trial, initial efforts to convict the murderers were stymied, with the first conviction not coming for another 14 years, with others not being convicted until 30 years later. Justice in some parts of America moves much more slowly for some people.

American actress Hattie McDaniel (1895 – 1952) with her Academy Award of Merit for Outstanding Achievement, circa 1945. McDaniel won an Oscar for Best Supporting Actress for her role of Mammy in ‘Gone With The Wind’, making her the first African-American to win an Academy Award.

When a church bombing killed four young black girls on a quiet Sunday morning in 1963, life for a young Condoleezza Rice changed forever.

The racial attack on the 16th Street Baptist Church, in the former secretary of state’s hometown of Birmingham, Alabama, rocked the nation and led to sweeping changes in laws governing civil rights.

But for Rice, just 8 years old at the time, the tragedy meant the death of a little girl she used to play dolls with, and the loss of her own youthful sense of security.

“As an 8-year-old, you don’t think about terror of this kind,” said Rice, who recounted on Friday her memory of the bombing and its aftermath in remarks to a gathering of civic leaders in Birmingham as part of several days of events leading up to the 50th anniversary of the bombing on Sept. 15.

Rice’s hometown had become a place too dangerous for black children to leave their own neighborhoods, or go downtown and visit Santa Claus, or go out of the house after dark.

Rice’s friend, 11-year-old Denise McNair, died in the blast along with 14-year-olds Carole Robertson, Addie Mae Collins and Cynthia Wesley. Their deaths at the hands of Ku Klux Klan members garnered national support for passage of the Civil Rights Act of 1964.

Events for the 50th anniversary of the bombing will include a screening of filmmaker Spike Lee’s new documentary, “Four Little Girls,” and a memorial service on Sunday scheduled to include U.S. Attorney General Eric Holder.

Rice has a treasured photo of her friend accepting a kindergarten certificate from Rice’s father, who was a pastor at another church. McNair had gone to preschool there. McNair’s father was the community photographer, documenting birthday parties and weddings in happier times.

“Everyone in the black community knew one of those girls,” Rice said.

Her father told her the bombing had been done by “hateful men,” she said, but it was an act that later uncovered something ultimately good.

“Out of great tragedy, people began to recognize our humanity, and it brought people together,” said Rice.

The bombing left its mark on her even as an adult, when as U.S. Secretary of State under President George W. Bush, she used the experience to understand the plight of Palestinian and Israeli victims of bombs and attacks during peace negotiations.

“I told them I know what it is like for a Palestinian mother, who has to tell her child they can’t go somewhere,” Rice said, “and how it is for an Israeli mother, who puts her child to bed and wonders if the child will be alive in the morning.”

But with all of the progress made in civil rights during the 50 years since the blast, Rice cites education as the biggest impediment to equality in modern times.

She expressed dismay at racial disparities in the quality of education for minorities and criticized the “soft bigotry of low expectations” in a system she said challenges black students less than others.

“Even racism can’t be an excuse for not educating our kids,” she said. “If a kid cannot read, that kid is done. A child in a bad school doesn’t have time for racism to be eradicated. They have to learn today.”

A Stained Glass window in the 16th Street Baptist Church after the bombing.

Posted by btx3 on September 14, 2013 in Black History, Domestic terrorism

No Rice for Romney

I would hope former Secretary of State Condoleeza Rice has woken up to the fact of Republicans using her race as cover. The old – they (the Democrats) have a black candidate running we need one too to deflect from the issue that Minorities hate us almost as much as we hate them routine.

Think Condo is making a wise decision here. She really doesn’t need to add another failure to her list of failures under the Bushit Administration. 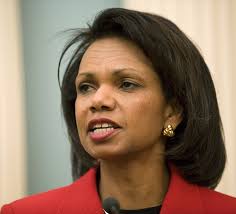 Former Secretary of State Condoleezza Rice is trying to tamp down any speculation she could be Mitt Romney’s vice presidential running mate.

Rice tells “CBS This Morning” she’s not interested in joining Romney, who has more than enough delegates to win the presidential nod at the party convention in Tampa.

Rice says, quote, “I didn’t run for student council president. I don’t see myself in any way in elective office.”

Rice also says “there is no way that I will do this because it’s really not me. I know my strengths and weaknesses.” She says Romney will pick a strong running mate and she’ll support the ticket.

Rice says that Romney will bring “first and foremost an understanding” of the role the United States’ role in the world.”

Posted by btx3 on March 22, 2012 in American Genocide, Domestic terrorism

Pate Robertson and Condoleeza Rice on Mac and Cheese for Thanksgiving

Enjoy everyone, dinner with family and friends wherever you are!

Posted by btx3 on November 24, 2011 in Black History, The Post-Racial Life

Ghadaffi Had The Hots for Condi?

Ooooooo! Turns out (soon to be) former Leader of Libya, Muhammar Ghadaffi had the hots for Former Secretary of State Condoleeza Rice!

Meet me in the casbah ...Ineed.

As the Libyan rebels ransacked Muammar Qaddafi’s compound this week,MSNBC notes today, they came across a rather creepy item: a photo album, shown below, filled with pictures of Condoleezza Rice giving speeches and meeting with foreign leaders:

The existence of the album, it turns out, is in keeping with Qaddafi’s longstanding affection for the former U.S. secretary of state. In an interview with Al Jazeera in 2007, the Libyan leader had nothing but effusive praise for Rice: “I support my darling black African woman,” he said. “I admire and am very proud of the way she leans back and gives orders to the Arab leaders … Leezza, Leezza, Leezza. … I love her very much.”

The next year, Rice became the highest-ranking American official to visit Libya since Richard Nixon in 1957, following Qaddafi’s decision in 2003 to abandon his nuclear weapons program and renounce terrorism. The Washington Post described the first encounter between Rice and Qaddafi–a private late-night dinner to break the Ramadan fast in a tent at his now-looted Bab al-Azizia compound–in the most romantic of terms…

As Rice prepared to depart Libya, Qaddafi showered the U.S. official with $212,225 worth of gifts, including a diamond ring in a wooden box, a lute and an accompanying DVD, and a locket with Qaddafi’s own picture inside, according to a State Department report. He also gave her “Wonder-Womanesque wristbands” and an autographed copy of his revolutionary Green Book with an inscription that expressed his “respect and admiration,” per a New York Times account.

Posted by btx3 on August 25, 2011 in Giant Negros, Music, From Way Back When to Now, The Post-Racial Life

Re Re and Condi Do a Duet For Charity

That’s right, the Queen of Soul and Condolezza Rice will be performing at a charity. Condi, among her many achievements, is a talented classical pianist – and everybody knows Aretha can sing.

Condi Tips the Fingers Lightly Down the Ivories

Democrat Aretha Franklin, the Queen of Soul, is tapping her Republican pal, former Secretary of State Condoleezza Rice, for a concert in Philadelphia next month.

The odd-couple pairing is more likely than it sounds, since Rice is a classically trained pianist and Franklin is currently working on an opera record featuring well-known arias.

“Ms. Rice is a consummate classical pianist and since I sing the arias, I thought that we could do something — a bipartisan effort for our favorite charities,” Franklin said.

At the show, set for July 27 at the Mann Center for Performing Arts, Franklin will perform a program of Handel, Mozart and her own hits.

Rice will accompany her on “Say a Little Prayer” and “Natural Woman.”

Rice will also perform a 20-minute set with the Philadelphia Orchestra. She has previously appeared on a bill performing with master cellist Yo-Yo Ma at the 2002 National Medal of Arts awards ceremony.

A rep for Franklin said it’s expected that she and Rice will also appear at the Kennedy Center in Washington, DC, and at Carnegie Hall in New York.

Condo’s net worth while working for the Bushit was estimated between $1.3 million and $2.9 million making here the 20th wealthiest government executive at the time. This is good money, but it damn sure isn’t F”k You money in today’s screwed up economy. Her earnings potential going forward is significant, but somewhat constrained by the political climate. She is assured a significant income from Hoover Institute providing racial cover to the scientific racism generated by the other “fellows”.

Which raises the question of why “buy” two memberships in Golf Clubs which she isn’t going to visit more than 1 or two times a year (at best). Undoubtedly, the Golf Clubs in question are paying Condo to be their “black member”, much the same way Hoover pays she, Tommie Sowell, and Shelby Steele as racial cover.

In for a dime, in for a dollar… Indeed. 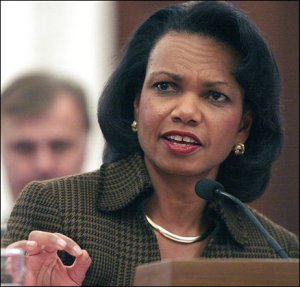 Rice is a native of Birmingham and has family there, though she does not own a home in the city. Chief of Staff Colby Cooper says the golf memberships at Greystone Golf & Country Club and Shoal Creek golf club are part of an effort to reach out to citizens of her home state. END_OF_DOCUMENT_TOKEN_TO_BE_REPLACED

Posted by btx3 on September 16, 2009 in Black Conservatives, The Post-Racial Life