All this over not sharing some potato salad?

And after coming after Dad with a kitchen knife…

She really expected Dad to welcome her back home? “Here baby, have some salad…”

One charge of aggravated assault, with a side of rage.

Police in Florida arrested a 45-year-old woman after she allegedly attacked her father for refusing to share his potato salad.

Officials say that Karen Henry, of Palm Bay, became enraged during the Oct. 22 incident, wielding a knife against her 80-year-old father and verbally abusing him, CBS Tampa reports.

“Karen became very angry that she could not have the potato salad and began throwing and breaking items,” a report obtained by The Daytona Beach News-Journal states. “[She] then grabbed a large kitchen knife and began threatening [her father] with it.”

Henry’s father, Hubert, defended himself with a chair before retreating to his bedroom for safety, according to reports.

Shortly after police arrested Henry, she began complaining of abdominal pains. Authorities allowed the suspect to be treated at Florida Hospital Flagler, only to catch her on the phone pleading with her father to drop the charges against her. As a result, police added an additional charge to Henry’s file: tampering with a witness.

Karen Henry is also charged with aggravated assault using a deadly weapon and is being held in Flagler County Inmate Facility without bail.

"Cornbread" is Cain's Self Appointed Nickname

Right on the tail of the Cain sexual harassment story, comes the Cain…

Moving money between a charity and a political campaign is definitely illegal, a big no-no – and should result in prosecution.

Republican presidential hopeful Herman Cain, whose candidacy is under siege followingsexual harassment allegations, also faces new questions about financial ties between his fledgling campaign and a private charity launched by two of his top aides.

Citing interviews and internal financial documents, the Milwaukee Journal Sentinel reportsthat a Wisconsin tax-exempt charity called Prosperity USA footed the bill for about $40,000 worth of iPads, chartered jet services and other expenses as Cain’s campaign got off the ground this year.

Expenses totaling $37,372 are listed in the group’s financial records as “due from FOH,” or Friends of Herman Cain, the name of his campaign committee. It is not clear whether Cain repaid the alleged debts, which are not listed in his personal or campaign disclosures.

Such payments are forbidden under federal tax and election laws, because nonprofit charities are not allowed to participate or donate money or services to political campaigns, according to election-law experts.

“It looks like a law school exam on potential campaign-finance violations,” said Lawrence H. Norton of Womble Carlyle, former general counsel at the Federal Election Commission. “Many of these payments would be prohibited contributions under federal election law.”

Block said Monday that the campaign has requested an independent investigation of the allegations. He did not provide further details.

“As with any suggestions of this type, we have asked outside counsel to investigate the Milwaukee Journal Sentinel’s suggestions and may comment, if appropriate, when that review is completed,” Block wrote in an e-mail…

Cain began taking donations for his then-quixotic presidential campaign in January. Bank records cited by the Journal Sentinel show Prosperity USA paid for $15,000 for a trip to Atlanta, $17,000 for chartered flights and $5,000 for travel and meeting costs in Iowa, Las Vegas, Houston, Dallas and Louisiana. The newspaper also said the Cain campaign was billed $3,700 for iPads purchased Jan. 4.

Records obtained by the Milwaukee newspaper also appeared to show a $100,000 payment to the Congress on Racial Equality, a conservative black group, shortly before Cain served as the keynote speaker at the group’s annual dinner, the newspaper said. The expense was apparently covered by $150,000 worth of loans to Prosperity USA by unidentified supporters, the report said…

Black Folks and the Parks

Been to Yellowstone, Grand Teton, Yosemite, and the Grand Canyon – and a number of the other Parks in the West and Southwest. Grand

Teton is one of the most stunningly beautiful places I’ve ever been to.

But to be honest with you – black folks are a bit thin on the ground in these parts. Then again, the population of the whole state of Wyoming is smaller than Washington, DC.

Reporting from Yosemite National Park— Their YosemiteValley tour was nearing its end, and the church ladies and gents from South Los Angeles had heard enough. Almost.

“He’s been telling us stories he thinks we want to hear for two hours,” said Ann Hale, 70, heaving a sigh of frustration from the back of the tram.

In fact, guide William Fontana had been regaling his listeners — most of them white — with stories about John Muir andTheodore Roosevelt, about fur trappers and rock climbers.

I don’t think so. This is fratricide within the Republican Party with Karl Rove’s fingerprints all over it. Faux News even jumped on this one to bring Cain down a peg or two – and possibly destroy his campaign.

Cain has gone in a few hours this morning from “it didn’t happen” to “I was falsely accused!”.

I think Mr. Lawn Jockey Cain got a bit too much traction, and was too full of himself… So he had to be reminded exactly what his value to the Republican Party is.

Is Herman Cain Another Clarence Thomas?

Those who remember the Clarence Thomas confirmation hearings, recall the Anita Hill affair…

Seems Clarence had a problem with the ladies.

Reports are coming out now that Herman Cain may indeed have the same problem. To be fair, this is still in the category where it could be a smear…

But Cain’s response below does leave a few questions.

Herman Cain, a businessman whose rise to the top of the Republican presidential polls has stunned the U.S. political establishment, was on the defensive Monday after a report he had faced sexual harassment accusations in the 1990s.

Cain planned to make several scheduled appearances in Washington on Monday following the report that alleges he was twice accused of sexual harassment while he was the head of the National Restaurant Association in the 1990s.

In a statement to The Associated Press on Sunday, his campaign disputed a report on the website Politico that said Cain had been accused of sexually suggestive behavior toward at least two female employees.

Cain — a self-styled outsider relatively new to the national stage — is facing a new level of scrutiny after a burst of momentum in the race for the Republican presidential nomination. He’s been steadily at or near the top of national surveys and polls in early presidential nominating states, competitive with former Massachusetts Gov. Mitt Romney.

The report said the women signed agreements with the restaurant group that gave them five-figure financial payouts to leave the association and barred them from discussing their departures. Neither woman was identified.

The report was based on anonymous sources and, in one case, what the publication said was a review of documentation that described the allegations and the resolution.

Cain’s campaign told the AP that the allegations were not true, and amounted to unfair attacks.

“Inside-the-Beltway media have begun to launch unsubstantiated personal attacks on Cain,” spokesman J.D. Gordon said in a written statement. “Dredging up thinly sourced allegations stemming from Mr. Cain’s tenure as the Chief Executive Officer at the National Restaurant Association in the 1990s, political trade press are now casting aspersions on his character and spreading rumors that never stood up to the facts.”

“These are baseless allegations,” Gordon said in a second interview later Sunday evening. “To my knowledge, this is not an accurate story.”

Cain plans to continue with several planned appearances in Washington on Monday. He is slated to discuss his tax plan at the American Enterprise Institute, appear at the National Press Club and hold a healthcare briefing on Capitol Hill.

The former pizza company executive has been pointing to his long record in business to argue that he has the credentials needed to be president during a time of economic strife.

In its report, Politico said it confronted Cain early Sunday outside of the CBS News Washington bureau, where he had just been interviewed on “Face the Nation.”

“I am not going to comment on that,” he told Politico when asked specifically about one of the woman’s claims.

Occupy Baltimore Gets Support of Police and Firefighters Unions

The Occupy Movement evening meetings appear to be the only place democracy is actually working in America anymore. There certainly isn’t any democracy left in the big marble buildings just 30 miles down Interstate 95 from Baltimore.

These guys are SERIOUS! 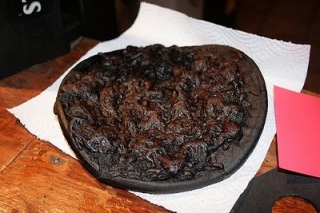 Herman Cain Pizza - Full of Isht, and more than a little burnt

The battle for pizza supremacy has taken a wrong turn in Florida.

Two managers of a Domino’s Pizza restaurant in Lake City, in north-central Florida, have been charged with burning down a rival Papa John’s location. The motive? Police say one of the men admitted that he believed with his competitor out of the way, more pizza lovers would flock to his restaurant.

The Papa John’s was gutted in the Oct. 20 fire.

Both men — Sean Everett Davidson, 23, and Bryan David Sullivan, 22 — were booked on an arson charge and were being held in jail.

The Star-Banner of Ocala reports that police are still looking for an ignition device that the men claimed they made but did not use to start the fire.

Geez… Folks have no imagination anymore! All the had to do was to put a couple of Godfather’s Pizza signs up near the Papa John’s with the same phone number, and float the rumor it had been bought out by Godfather’s…

And that would have had folks flocking to Dominos!