Officer Wesley Cheeks of the Fairfax County Police Department has a run in with a Tea Bagger at the recent Town Hall Meeting in Reston, Virginia hosted by Representative Jim Moran.

This one is one of the latest attempts by the right to characterize opposition to their efforts to disrupt Town Hall meetings as “Freedom of Speech”.

Now, to be honest, I know the Officer involved. I’ve met him several times in social situations. He’s been with the Fairfax Police 18 or 20 years, and has been an exemplary officer to my knowledge.

During the Vietnam protest era, one of the favorite bumper stickers of the right was “My Country, right or wrong”, a second was “America – Love it or leave it”.  Indeed, one of the most bitter and cutting criticisms of the actions of some of the War protesters is how they derided, and disrespected American institutions, members of the Armed Forces, and our government.

Starting with the Raygun ascendancy, Republicans turned that bitterness into political hay, making Vietnam Vets who were bitter about their mistreatment by the “left” into a functional arm of the Republican Party. The Republican Party would claim the Patriotism high ground for the next 20 years when George W. Bush’s attempts at jingoism, and plastic patriotism in to hide the fact he had lied the country into the Iraq Invasion became painfully apparent to even the most red, white, and blue soul.

Under the American core belief structure of Freedom, Fair Play, and honsesty – what the Bushits did wasn’t anything a Patriot could be proud of – perhaps leading to Michelle Obama’s much maligned comment about her pride being restored in the country.

The point being, patriotism has moved fully to the other side of the political coin. As such, some folks – particularly minority folks aren’t going to be too thrilled about seeing their President defamed…

Did I mention “Love it or leave it”?

more about “Whose Freedom?“, posted with vodpod

Where did all the “illegal immigrants” go?

Back home, in the face of the recession, it seems. Folks up in arms about building those border fences…

Might want to install a few gates that swing towards Mexico.

more about “US recession forces Mexican migrants …“, posted with vodpod

The overreaching of the federal government is pushing the U.S. towards a revolution, Sen. Jim Inhofe (R-Okla.) said today.

“People are not buying these concepts that are completely foreign to America,” Inhofe said at a townhall in Chickasaw, Okla. “We’re almost reaching a revolution in this country.”

Inhofe has been one of the Senate’s most strident opponents of climate legislation and healthcare reform.

Inhofe added that he didn’t need to read the full helathcare legislation before deciding to vote against it. Public opinion and news reports, he said, provided all the information he needed.

Geez… You going to use the same flag as last time? 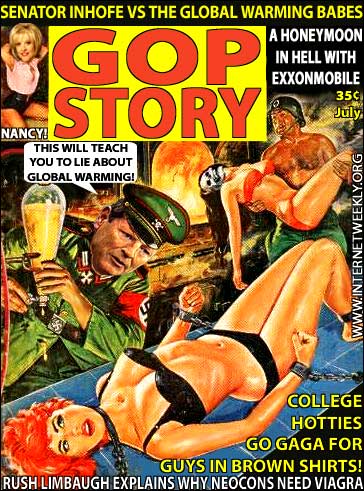 Posted by btx3 on August 29, 2009 in Stupid Republican Tricks

Your Brain on Conservatism

This is the death of America…

This is an example of how certain belief sets are propagandized and engineered on an issue, in this case supporting racism –

This is the result of the frequent application of propaganda to misinform, and to form belief sets in the populace in direct opposition to plainly available evidence to the contrary –

This from a longer piece published as Fascist America, Are We There Yet?

From proto-fascism to the tipping point
According to Paxton, fascism unfolds in five stages. The first two are pretty solidly behind us — and the third should be of particular interest to progressives right now. END_OF_DOCUMENT_TOKEN_TO_BE_REPLACED

Posted by btx3 on August 29, 2009 in Stupid Republican Tricks, The Post-Racial Life

Winter In America – the Recession’s Impact on Minorities

This is a discussion of how the “recession” has impacted the Minority communities.

more about “Recession for Black Folks? No – A Ful…“, posted with vodpod

No Health Care For Republicans!

They want to piss and moan about it… Fine! 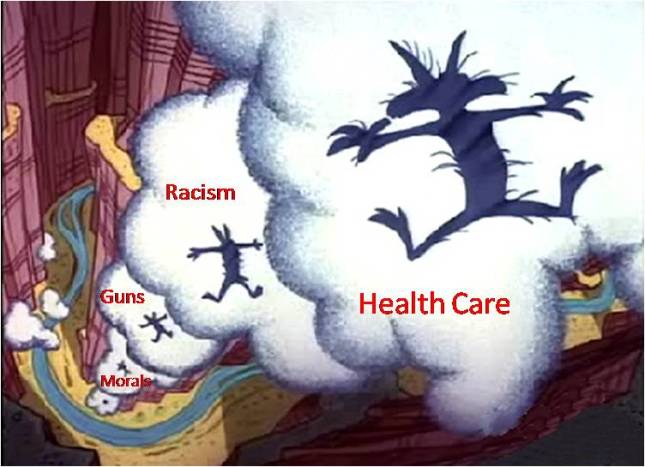 Republicans, fresh from lying about “Death Panels” have come up with yet another creative illusion for their cretin base…

WASHINGTON — The national Republican Party has mailed a fundraising appeal suggesting Democrats might use an overhaul of the health care system to deny medical treatment to Republicans.

A questionnaire accompanying the appeal says the government could check voting registration records, “prompting fears that GOP voters might be discriminated against for medical treatment in a Democrat-imposed health care rationing system.”

It asks, “Does this possibility concern you?”

Katie Wright, a spokeswoman for the Republican National Committee, said the question was “inartfully worded.”

But she said people should worry because government officials would have access to personal financial and medical data.

“The RNC doesn’t try to scare people,” said Wright. “We’re just trying to get the facts out on health care. And that’s what we do every day.”

Obama would deny Health Care based on Party Affiliation?

WTF they think he is… George W. Bush?

Posted by btx3 on August 28, 2009 in Stupid Republican Tricks

Lot of competition this year from black conservatives, but Rev. Mack Daddy Manning has not only moved into the house…

Come on up Rev – and get your Lawn Jockey of the Year Award. 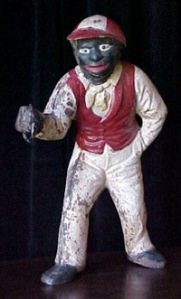 DJ Newk From Back In The Day 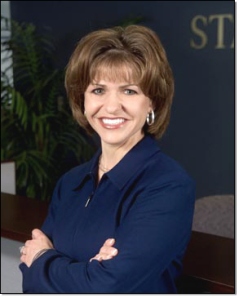 The latest blunder comes courtesy of US Rep. Lynn Jenkins, who represents Kansas’s 2nd District. According to a bio posted on her site, Jenkins, a Republican, grew up on a farm, where she “learned the values of hard work, keeping your word, and the importance of serving your community.” But Jenkins, like many of her fellow GOP members, is incensed about the new healthcare reform bill supported by the White House.

She’s also incensed that Democrats have taken control of the House and Senate. She’s praying for a challenger. Someone who can assume the mantle of the right. Someone who holds dear traditional conservative values. And someone, apparently, who is Caucasian. Today, the Associated Press reported that Jenkins told attendees of a Kansas rally that the Republican Party was in need of a “great white hope.”

Once the media got a hold of the story Jenkins quickly began to backpedal. Through a spokeswoman, Mary Geiger, Jenkins apologized for her word choice and said she did not intend to offend anyone. The White House has not yet weighed in. It’s possible, of course, that Jenkins didn’t understand that “great white hope” is an extremely loaded term.

It was first employed near the beginning of the 20th century, when boxing promoters cast about frantically for a white fighter who could challenge Jack Johnson. Johnson, a black man, was the target of a vicious racist campaign, and in 1912, he was twice arrested for transporting white women “across state lines for immoral purposes.”

Guss it would be unfair to inform Rep Jenkins…

Glenn Beck ‘fesses-up to being a “Dirtbag”, as well as having been financially hurt by the Boycott.

The funniest accusation is that it is the great mysterious “Powers that be” that are putting the hurt on him – when in actuality it is hundreds of thousands of consumers who have tired of his racist and anti-American rants.

Beck admits to being a recovering alcoholic. And if that is true, I can wish him nothing but success in his continued recovery. However, if this guys stopped drinking…

Why does he still act like he’s suffering the effects of the DT’s?

more about “Glenn Beck ‘Fesses Up – “I’m a Dirtbag”“, posted with vodpod

Like almost any issue there are two sides. The side making the most “newsworthy” claim is likely to get the press. Such is so relative to the ongoing legal battle between the leadership of the AKA Sorority and a group of disaffected members who have charged the current Sorority President, Barbara McKinzie with fiduciary malfeasance and outright theft of the organizations’ funds. 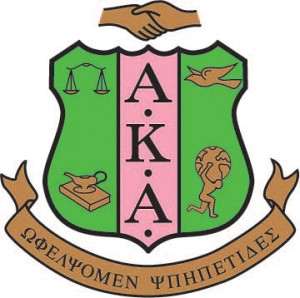 One of the key accusations against Mrs Mckinzie is that she commissioned a $900,000 wax statue of herself to be added to The National Great Blacks in Wax Museum. The Founder of the Museum, Dr. Joane M. Martin seeks to set the record straight in an open letter tot he AKA Sorors – END_OF_DOCUMENT_TOKEN_TO_BE_REPLACED

Some Folks Have More First Amendment Rights Than Others

Voicing an opinion while Black …

It would seem some folks have more First Amendment Rights than others in Georgia. Not surprisingly, those folks also have less melanin.

Hat tip to – The Grio

The Black Hatfields and McCoys

The most famous American family feud was that between the Hatfield and McCoy families who lived in the mountains on either side of the Kentucky – West Virginia border. The feud spanned about a 75 year period after the Civil War, and resulted in a number of murders, shootouts, and beat downs as each family sought revenge for the wrongs, percieved or real from the other. 100 years later the feud is memorialized in frescoes along the Tug River Dam, and has become American Legend. The families have long since buried the hatchet, and at the last joint family get together over 5,000 relatives showed up.

Ted Kennedy on the Assassination of Martin Luther King Jr.

more about “Ted Kennedy on the Assassination of M…“, posted with vodpod

About Those Obama Poll Numbers

To hear conservatives tell it, President Obama’s poll numbers are dropping faster than some of our more published black conservatives to their knees…

When confronted with a white conservative with his pants unzipped.

Unfortunately for conservatives and Republicans, between the self inflicted political suicide by bimbos (conservative toast), and the general lackluster talent available in the conservative sphere…

That still doesn’t mean a Republican can win an election.

According to the latest Poll of potential candidates for the 2012 Presidential race – Obama led:

Newt Gingrich, former speaker of the House, by 18 points: 52 percent to 34 percent, with 15 percent undecided.

Meaning the Neutered One, and the Sno’ Ho’ don’t stand a Sno’ Ho’s chance in Hell .

As for Romney, non conservatives like him more than conservatives – who won’t vote for him because he’s a Mormon. Which in their view is “non-christian” and “Satan’s religion”.

Huckabee, at this point has to be the odd’s on favorite to be the Republican candidate sans another “Bimbo eruption” so seemingly common to the sanctimonious. This anti-conservative actually likes Huckabee (not enough to vote for him against Obama at this point), not the least because unlike many of his fellow conservatives…

He isn’t a racist asshat.