Rules of the Illuminati Noir

I have no idea whether once finishing this site, whether anyone, or even very many people will find it’s content interesting enough to come back, or to stay and engage in a few comments. 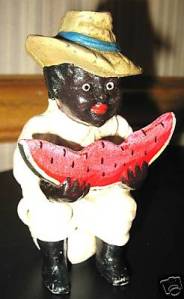 Did I mention I collect Black Americana?

However, with that said – I’d like to establish a few Rules of the Illluminati Noir –

Unlike notoriously thin skinned black conservatives, being a progressive means having a pretty thick skin. Mild cuss words if you feel the need. The “f” bomb, the “b” bomb – I’ll delete. And no,  I don’t want to hear about what position you wish you had sex in last night or which you’d like someone who disagrees with you to take.

SPAMjamming – I have been around the blogsphere long enough to have seen a few posters who throw up mass volumes of totally inane crud over multiple posts in an attempt to flood the discussion.  Say what you have to say.. But don’t stink up the joint.

And if you say it…

You probably should be able to back it up with references.

Other than that, spirited discussion is welcome.

13 responses to “Rules of the Illuminati Noir”