Is quite simply that the BLM Movement has gained traction.  We have seen more indictments of Police for egregious and illegal behavior this year, than I dare say in the last 20 years.

Which is pissing the racist right off. Now, more than ever they need folks who will deny what is going on….And it is a sellers market for any low moral Negro who is willing to buckdance.

Portsmouth, Virginia, officer Stephen Rankin was indicted on a first-degree murder charge Thursday after the fatal shooting of an unarmed black 18-year-old earlier this year.

A grand jury decided to charge Rankin, who shot and killed William Chapman II outside a Walmart on April 22, according to The Virginian-Pilot. Autopsy reports obtained by the paper show that Chapman was shot in the face and chest, and that his body was carted off to the city medical examiner’s office with his hands cuffed behind his back.

“After a methodical deliberation of a thorough investigation by the Virginia state police, the state’s attorney determined that William Chapman was murdered by a police officer,” Chapman family attorney Jon Michael Babineau told The Guardian. “Today, the citizens of Portsmouth agreed.”

The Guardian reports on the incident:

The pair had engaged in a physical struggle after Rankin tried to arrest the 18-year-old on suspicion of shoplifting, according to police.

Witnesses said Chapman broke free and then stepped back towards the officer aggressively before being shot twice. The 18-year-old was the second unarmed man shot dead by Rankin in Portsmouth. An autopsy indicated Chapman was not shot at close range.

The shooting was investigated by the Virginia State Police, which passed its investigation to Portsmouth Commonwealth’s Attorney Stephanie Morales earlier this month. She said last week that she’d seek an indictment in Chapman’s death.

“He gives Mr. Chapman commands, and it’s at that point Mr. Chapman charges at him and the officer had to respond,” Nicole Belote told WTKR. 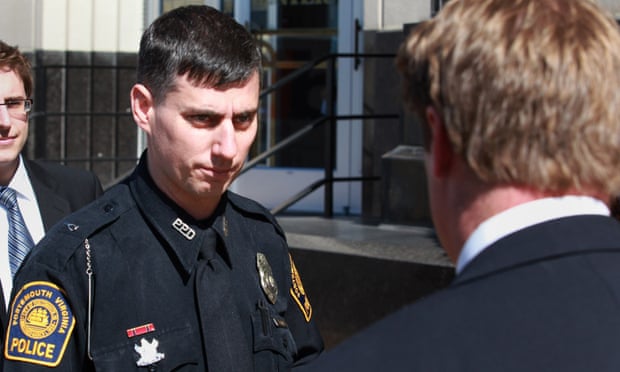 Rankin was in the media spotlight in 2011 when he shot and killed another unarmed man, Kirill Denyakin, though he was cleared of all wrongdoing. Denyakin’s lawyer told 13 News Now that he was “unsurprised” the latest incident occurred and “thought he would do this again.”

The vast majority of Police Officers never discharge their weapon in the line of duty. Hard to believe one officer could be involved into situations of confronting unarmed suspects and need to fire his weapon…

Which gets into why the First Degree Murder Charge.

Posted by btx3 on September 4, 2015 in BlackLivesMatter, Domestic terrorism

2 responses to “Policeman Indicted in KIlling of Portsmouth, Virginia Teen”