The wheels of Justice only took 70 years this time… Took about 15 minutes to convict the boys of something they couldn’t possibly have done.

70 years to admit a wrong that only took 15 minutes to commit. 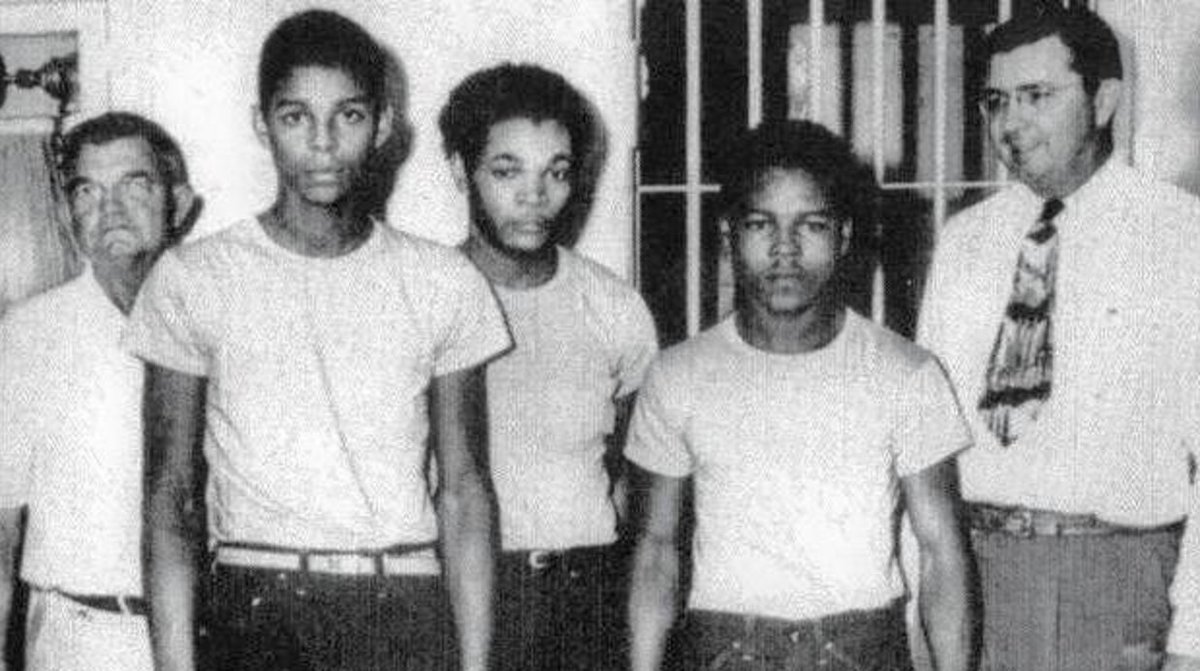 In the summer of 1949, a 17-year-old white girl named Norma Padgett accused four black men of kidnapping her from a dark road in central Florida and then, in the back seat of their car, taking turns raping her.

Neighbors quietly doubted the girl’s version of events, and others speculated that the elaborate, detailed account was merely a coverup for the bruises she’d collected from her husband’s suspected beatings.

But this was the era of Jim Crow, in the middle of Lake County, where the local economy was sustained by orange groves that white men relied on black men to nurture.

And there to ensure law and order was Willis V. McCall, a sheriff buoyed by his segregationist, union-busting, white supremacist reputation.

Within days of Padgett’s accusations, three black men from the city of Groveland were in jail and a fourth, Ernest Thomas, was dead, shot and killed by an angry mob — led by McCall — who had chased him 200 miles into the Panhandle. In Groveland, black-owned homes were shot up and burned, sparking chaos so intense the governor eventually sent in the National Guard.

Based on little evidence, a jury quickly convicted the living three.

Charles Greenlee, just 16 at the time, was sent to prison for life.

Samuel Shepherd and Walter Irvin, friends and Army veterans, were sentenced to death, but the U.S. Supreme Court later overturned their convictions and ordered a retrial. Before that could happen, though, McCall shot them both. Shepherd died at the scene, but Irvin — who played dead — survived, and his sentence was later commuted to life in prison.

The saga of the men who became known as the “Groveland Four” has spanned nearly seven decades, tarnished the reputation of the town that endorsed it, inspired a revelatory, Pulitzer Prize-winning book and became the subject of an online petition demanding that Gov. Rick Scott formally exonerate all four.

After 68 years, and several previous failed attempts, the state of Florida has finally found the words that justice had been waiting on all this time: “We’re truly sorry.”

On the floor of the Florida House of Representatives on Tuesday, lawmakers unanimously passed a resolution apologizing to the families of the “Groveland Four” and exonerating the men. It also calls on Scott to expedite the process for granting posthumous pardons.

None of the “Groveland Four” are still living.

“This resolution is us simply saying ‘We’re sorry’ understanding that we will never know nor be able to make up for the pain we have caused,” said Rep. Bobby DuBose, a bill sponsor, according to the Miami Herald.

Then he asked House members to stand and face relatives of the “Groveland Four” who were present.

“As the state of Florida and the House of Representatives,” DuBose said, “we’re truly sorry.”

The formal acknowledgment of the case, now widely considered a racial injustice, has been years in the making. A book by author Gilbert King, “Devil in the Grove: Thurgood Marshall, the Groveland Boys, and the Dawn of a New America,” revived interest in the decades-old case and unearthed new evidence from once redacted FBI files that cast doubt on Padgett’s version of events.

Then in 2015, after reading King’s book in a college history class, University of Florida student Josh Venkataraman was driving from Orlando back to campus when he passed the road sign for the city of Groveland.

The book had “touched him,” he told a Miami Herald columnist in 2015, but seeing the physical place made it real.

He reached out to Carole Greenlee, the late Charles Greenlee’s daughter, who was living in Nashville, and asked if he could help.

At first the woman was skeptical, but eventually gave Venkataraman her permission to start a petition.

“I’m in the mode of trying to get my father exonerated,” she told the Herald years ago, “and I need all the help I can get.”

“Exonerate the Groveland Four” was born, and in the two years since has garnered nearly 9,000 signatures…Read the Rest Here…

Posted by btx3 on April 19, 2017 in Black History, BlackLivesMatter

This one makes you think. It seems awfully easy in our Justice System to convict somebody – but the system can drag its feet for years when proved wrong. Maybe they need to throw some of these prosecutors in jail.

Some 20,000 convicted drug offenders’ cases are being thrown out thanks to a rogue chemist.

Convicted Felon Annie Dookhan got less time than many of those she put in jail, after wrecking 20,000 lives. So much for justice.

Thousands of people at the center of one of the largest drug lab scandals in U.S. history can breathe a collective sigh of relief thanks to former Massachusetts state chemist Annie Dookhan.

According to the American Civil Liberties Union of Massachusetts, prosecutors in seven districts on Tuesday moved to dismiss criminal cases in which Dookhan fabricated evidence.

“Today is a major victory for justice and fairness, and for thousands of people in the Commonwealth who were unfairly convicted of drug offenses,” said Matthew Segal, legal director for the American Civil Liberties Union of Massachusetts.

The Massachusetts ACLU estimates roughly 20,000 cases have been tossed out, making it the single largest dismissal of wrongful convictions in U.S. history.

The dismissals came after nearly five years of legal wrangling between the prosecutors who fought to preserve the convictions and defense attorneys and civil rights groups who argued they should be tossed.

“Unfortunately, the victims of this crisis waited far too long for justice,” Segal said. “It shouldn’t have taken years of litigation by the ACLU, public defenders, and pro bono lawyers to address this stain on the Commonwealth’s justice system.”

Authorities in 2012 discovered Dookhan had been falsifying test results and tampering with evidence for nearly a decade. The discovery was made after she was fired from her job at a Boston lab operated by the state Department of Public Health.

In January, the Massachusetts Supreme Judicial Court gave the district attorneys’ offices until April 18 to notify them which of the cases involving Dookhan could be retried without drug lab evidence.

An exact number of dismissals for the remaining five districts has not yet been released.

For her part in the scandal, Dookhan pleaded guilty to multiple charges in 2013, including 17 counts of obstruction of justice and eight counts of tampering with evidence. She was ultimately sentenced to three to five years in prison.

Dookhan was released on parole last year after serving less time than many of the people she helped victimize.

According to the American Civil Liberties Union of Massachusetts, the cases were particularly damaging to “low-income and black and brown” communities.

“Now, a majority of these wrongfully convicted individuals will have the opportunity to clear their records and move on with their lives.”

Posted by btx3 on April 18, 2017 in American Genocide, BlackLivesMatter

Wrongful Justice…Is No Justice At All

The Dixmoor 5 – In this case, 5 innocent teenagers (*Dixmoore Five*) were convicted of the rape and murder of 14-year-old Cateresa Matthews. DNA excluded all of them. The DNA found on and in this young girl belonged to Willie Randolph, a convicted rapist. In 2011, his DNA was matched to the DNA left at the crime scene, and he has yet to be charged with the murder of this innocent girl. He is a convicted sex offender, and is in prison for that a some other charges. Three were 14 and two were 16 when convicted (Sound familiar?)

The five men spent a collective 80 years in prison

The State knew 5 years ago that these men were innocent, and the identity of the real murderer…But did nothing. Losing a $40 million lawsuit to the 5 wrongly convicted in 2012, still didn’t move the state forward. Ain’t it funny how fast Justice can convict someone wrongly …But to correct an error takes years?

Sex offender to be charged in 1991 rape, murder of Illinois teen after men known as ‘Dixmoor Five’ had wrongly spent time in prison

A 58-year-old sex offender will be charged in the 1991 rape and murder of a 14-year-old suburban Chicago girl after men known as the “Dixmoor Five” had wrongly spent time in prison for the brutal crime.

Willie Randolph will appear in bond court on Thursday afternoon on charges of murder, kidnapping and predatory criminal sexual assault in the death of Dixmoor teen Cateresa Matthews. He is already serving a three-year sentence for drug possession in an Illinois state prison, but was to be released in a few weeks, according to the Chicago Tribune.

The “Dixmoor Five” reached a $40 million settlement with Illinois State Police two years ago after they were cleared of all charges in Cateresa’s death. They spent a decade or more in prison before DNA evidence pointed to Randolph, and not them.

The DNA evidence against Randolph was discovered five years ago, according to the Chicago Tribune, but authorities did not bring charges against the sex offender until now.

“I kept meeting with them and meeting with them, and they said they were investigating,” Cateresa’s mother Theresa Matthews told the Tribune on Wednesday. “They said, ‘We don’t have enough evidence.’ And I said, ‘What more do you need? You have the DNA.’ It just didn’t make any sense.”

Randolph had recently made statements in prison to incriminate himself, and he made them “with much bravado,” a law enforcement official told the newspaper.

Cateresa vanished late in 1991 after leaving her grandmother’s home, and her body was found three weeks later, according to the Tribune.

The Forgotten in Kentucky

Most people in Kentucky are unaware that “seducing or enticing slaves to leave their lawful owners” was once such a grievous crime that scores of abolitionists suffered long years behind bars for their common-sense daring. One of them was forgotten in his cell until five years beyond the end of slavery and the Civil War. Others emerged to tell of bleeding under the warder’s lash in a “jaws of hell” torment delivered by the state as the appropriate penalty for urging blacks to find freedom.

Modern Kentucky is blessed that some citizens — including an archivist and a public defender — are roiled enough to be campaigning for a just postscript to that horrendous era: an official pardon for 44 abolitionists long dead and gone. The campaign is a welcome contrast to thoughtless proclamations that embarrass Old South statehouses with salutes to a Confederate history often omitting the towering facts of slavery.

“To be totally forgotten — where nobody today even remembers their names — it seems an incredible injustice,” James Prichard, a retired state archivist, told The Lexington Herald-Leader about his research on the 44, 24 of them whites. Mr. Prichard’s work inspired Rodney Barnes, the public defender in Frankfort, and Jared Schultze, a Kentucky-born college intern determined to set his state’s history right.

Distracted though he is by current criminality, Mr. Barnes presses for the pardons as time-defying challenges for the halls of justice. “These people are heroes — they did the right thing,” said Mr. Barnes, laboring for this chance for Kentucky to stand tall. The office of Gov. Steve Beshear admits to being “intrigued” and is reviewing the pardon request.

Cold cases from slavery days truly come alive in the details Mr. Prichard has gathered. Tales of Tom Johnson, “a free man of color” who fell in love with Amanda, the property of F. B. Merriman of Marion County. The freed slave was imprisoned for wooing Amanda into elopement. And the black matriarch Julett Miles, who doubled back from freedom in Ohio when she heard her enslaved family was up for resale in Kentucky. She did three years for the crime of “stealing” some of her own children. She was buried with her history, until now.