9-Year-Old Is The Youngest Published Chapter Book Author In The U.S.

Anaya Lee Willabus started reading at the impressive age of 2.

Anaya Lee Willabus, 9, launched her writing career and made history at the same time when she published her first book The Day Mohan Found His Confidence.

Willabus published the book in May 2015 when she was only 8 years old, making her the youngest person in the United States to publish a chapter book.

In an interview with PIX11, she said that what she accomplished felt amazing. “It’s just so inspirational, not only for me but for younger kids and that’s good.”

The novel follows a young boy named Mohan as he overcomes challenges at home and school but he ultimately learns he can do anything with the help and support of family and friends.

Willabus’ parents praised her for her self-motivation. Since she began reading at the age of 2, the Brooklyn-native has read all of the books in her family’s library which her mom said consisted of more than 300 books. A few of her favorite titles include I Am Malala, Dreams from My Father and Fire from the Rock.

When she grows up, Willabus said she wants to change the world by becoming a teacher and continuing her career as an author.

Judging by her accomplishments thus far, she’ll probably reach those goals, too.

Octavia E. Butler, And the Power of Determination

In the business world, there is a strategy called the “Self Fulfilling Prophecy”. Ergo, you can’t get that promotion to the executive suite – until you act like you already have it. One of the key steps to that is developing “presence” a self belief in yourself that projects to others. That same “presence” is what defined the Civil Rights Movement of the 50’s and 60’s that a long suffering people had dignity, the right to be treated fairly, and moral clarity.

Octavia E. Butler is best known for her Science Fiction novels, which incorporate aspects of African American spiritualism to create stories woven in deep characters, whose change in response to hardship and rejection chart humanism and the effort to mold the world around us. Her best known work is “Kindred”

From “Earthseed: The Books of the Living,”Parable of the Sower.

Octavia E. Butler Wrote The Story Of Her Success Years Before It Happened 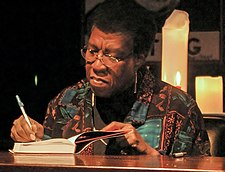 This year marks the 10th anniversary of the death of Octavia E. Butler, the Hugo-award winning science fiction writer best known for the novels “Kindred” and “Parable of the Talents.” As an African-American female author in the predominantly white, predominantly male sci-fi landscape, Butler achieved extraordinary success over her decades-spanning career, even winning the MacArthur Fellowship “Genius Grant”.

And now, the release of personal journals from the late novelist has revealed one more extraordinary thing about her success: She wrote it down before it happened.

On Wednesday, the Huntington Library in California published a collection of notes and journal entries written by Butler throughout her lifetime. On one notebook from 1988, pictured below, Butler writes: “I shall be a bestselling writer… each of my books will be on the bestseller lists of LAT, NYT, PW, WP, etc. My novels will go onto above lists whether publishers push them hard or not.”

Amazingly, Butler would soon find the kind of success she wrote about not long after writing down these affirmations. Many of her novels, including “Clay’s Clark” and “Kindred,” were at the tops of bestseller lists around the world, and earned her honors and accolades including an induction into the Science Fiction Hall of Fame. In 2006, in memory of her death, the Octavia E. Butler Memorial Scholarship was founded, providing Clarion Writers’ Workshop scholarships for young writers of color. This year, Butler will be honored in a year-long series of events and exhibitions in Los Angeles celebrating her life and her work. Talk about inspiring.

From Prison to Poet

This is the uplifting story of one Reginald Dwayne Betts Jr., a stupid mistake, and a decision to move forward.

Yes, One Book Can Change Your Life, Even In Prison

A book of black poetry slides under a cell door in solitary confinement. And it changes everything.

Reginald Dwayne Betts Jr. goes by the name Dwayne. But for the majority of the nine years he spent in prison, he gave himself the name Shahid. It means “the witness” in Arabic.

At 16, Betts pled guilty to carjacking in Virginia and was in prison until he was 24. For many years, cultivating his identity — hard stuff for any teenager — was a mostly solitary endeavor. Books, and later poetry, became his teacher, his classroom and his peer.

“I read anything I could find. Poetry makes you reflect. Joseph Brodsky once wrote: ‘I have braved, for want of wild beasts, steel cages.’ That shit says everything that I would ever want to say about mass incarceration,” he told The Huffington Post in an interview last week.

In the decade since his release from prison, Betts, now 34, has published an award-winningmemoir about coming of age in prison, written two books of poetry, received undergraduate and MFA degrees and is currently in his final year at Yale Law School.

His upcoming book of poetry, Bastards of the Reagan Era, will be released in October.

Learning has always been deeply important to Betts. He dreamed of playing point guard at Georgia Tech and becoming an engineer. He says numbers came easily to him and that as he grew, the two most important things to him were math and philosophy.

He started hanging out with a bad crew in his hometown of Suitland, Maryland and sneaking out of class at 16. At the time, he was taking a full load of challenging classes, including Physics, French 4 and AP U.S. History.

Everything changed on December 7, 1996. On a visit to the Springfield Mall in suburban Virginia about 20 miles from their hometown, Betts and a friend came across a man asleep in his car in the parking lot. They impulsively carjacked him and took off on what would prove to be one of the quickest roads to stalling one’s life as a teen.

At the time, carjacking in Virginia carried a maximum penalty of life in prison and the state had done away with parole. On December 8, one day after the carjacking, Betts stood before a judge and was charged with six felonies and nine years in prison.

The presiding judge had wise words for Betts, who recalled what he was told in a 2010 New Yorker article. The words are seared in his mind: “I don’t have any illusions that the penitentiary is going to help you, but you can get something out of it if you want to,” the judge said to the 16-year-old.

Due to lack of space for incoming juveniles, Betts was thrown into solitary confinement without a mattress, blanket or pillow. When he was pulled out 10 days later and moved to his cell block, Betts carried the only thing he had shown up with: a book by James Baldwin.

Betts poured himself into reading. He turned page after page of The Confessions of Nat Turner, Go Tell It on the Mountain and A Lesson Before Dying. He read George Orwell and every book by Charles Dickens. He inhaled classics like Of Mice and Men, The Grapes Of Wrath and The Jungle. He read the philosophy of Max Weber, Franz Fanon and C.L.R. James.…The Rest Here…

Anyone who was ever a 60 Minutes fan knows the wit of Andy Rooney. For decades Andy’s 3 minutes at the end of the show alternately amused and pissed off his listeners with wit, a sense of the absurd, and his ordinary guy persona.

He had been hospitalized after suffering complications following minor surgery last month.

“It’s a sad day at ’60 Minutes’ and for everybody here at CBS News,” said Jeff Fager, chairman of CBS News and the executive producer of ’60 Minutes.’ “It’s hard to imagine not having Andy around. He loved his life and he lived it on his own terms. We will miss him very much.”

Rooney made his last regular weekly appearance on “60 Minutes” on Oct. 2. A few weeks later, CBS announced he was in a hospital.

Rooney’s colleague and longtime “60 Minutes” correspondent Morley Safer told CNN Saturday that Rooney worked to the very end and that he would not have wanted it any other way.

“That’s the way to go,” Safer said. “The only thing better than three weeks would have been three minutes.”

“What a life: ninety-two years of doing what you love to do while engaging and entertaining millions and millions of people,” he said.

And Lesley Stahl, also Rooney’s colleague on the show, called him “our poet laureate.”

“He was the Oracle of West 57th Street, an everyman if everyman wrote like a dream,” she said. “He was the most popular member of our team, loved by the audience, and far more loved by all of us than he knew.”

Rooney got his start in journalism as a writer in the Army and went on to spend nearly six decades at CBS, half behind the camera as a writer and producer and then as an on-air commentator in 1978 when he joined “60 Minutes.” His commentaries earned him the title King of Grouch.

On looking for a job, he said: “We need people who can actually do things. We have too many bosses and too few workers. More college graduates ought to become plumbers or electricians, then go home at night and read Shakespeare.”

Obama To Publish Children’s Book Dedicated to his girls

Is Dad the best… or What? Glad mine are old enough not to want Dad to write a book for them! Be a real hard act to follow.

Obama adds a children’s book to his publishing credentials

There’s yet one more book to file under “O” for Obama. “Of Thee I Sing: A Letter to My Daughters,” an illustrated children’s book titled by the president, will be released on Nov. 16.

According to the book’s publisher, “Of Thee I Sing” is “a moving tribute to thirteen groundbreaking Americans and the ideals that have shaped our nation – from the artistry of Georgia O’Keeffe, to the courage of Jackie Robinson, to the patriotism of George Washington.” The book will be illustrated by well known author and illustrator Loren Long (author of “Otis” and other children’s titles).

The publication of “Of Thee I Sing” completes a three-book, $1.9 million deal Obama signed with Random House while he was still an Illinois senator, including his earlier bestselling titles “Dreams from My Father” and “The Audacity of Hope.”

However, if there’s more room in the “Obama” section of your personal library, there’s no need to stop at books by the president. Quite a number of titles by members of the Obama family are now available. These include: a memoir called “Homeland” by the president’s halfbrother George; an upcoming children’s book called “Ladder to the Moon” by his halfsister Maya Soetoro-Ng; a memoir called “A Game of Character” by his brother-in-law Craig Robinson; and “Surviving Against the Odds: Village Industry in Indonesia,” the doctoral dissertation of his mother, S. Ann Dunham, which was published posthumously by Duke University Press last year.

And if that’s still not enough Obama for you, you can also look forward to a foreword by the president that will appear in Nelson Mandela’s private diaries, “Conversations with Myself,” due out in October, and an upcoming young-adult version of “Dreams from My Father.”

The Nov. 16 release of “Of Thee I Sing” has been carefully timed to ensure that the book lands in bookstores at just the right moment – two weeks after midterm elections but still in plenty of time for holiday shopping.