Just for the fun of it, Google compiled a list of the word most frequently misspelled by state. Check out your state!

For those of us half-blind and who also can’t spell, go here for a larger image. 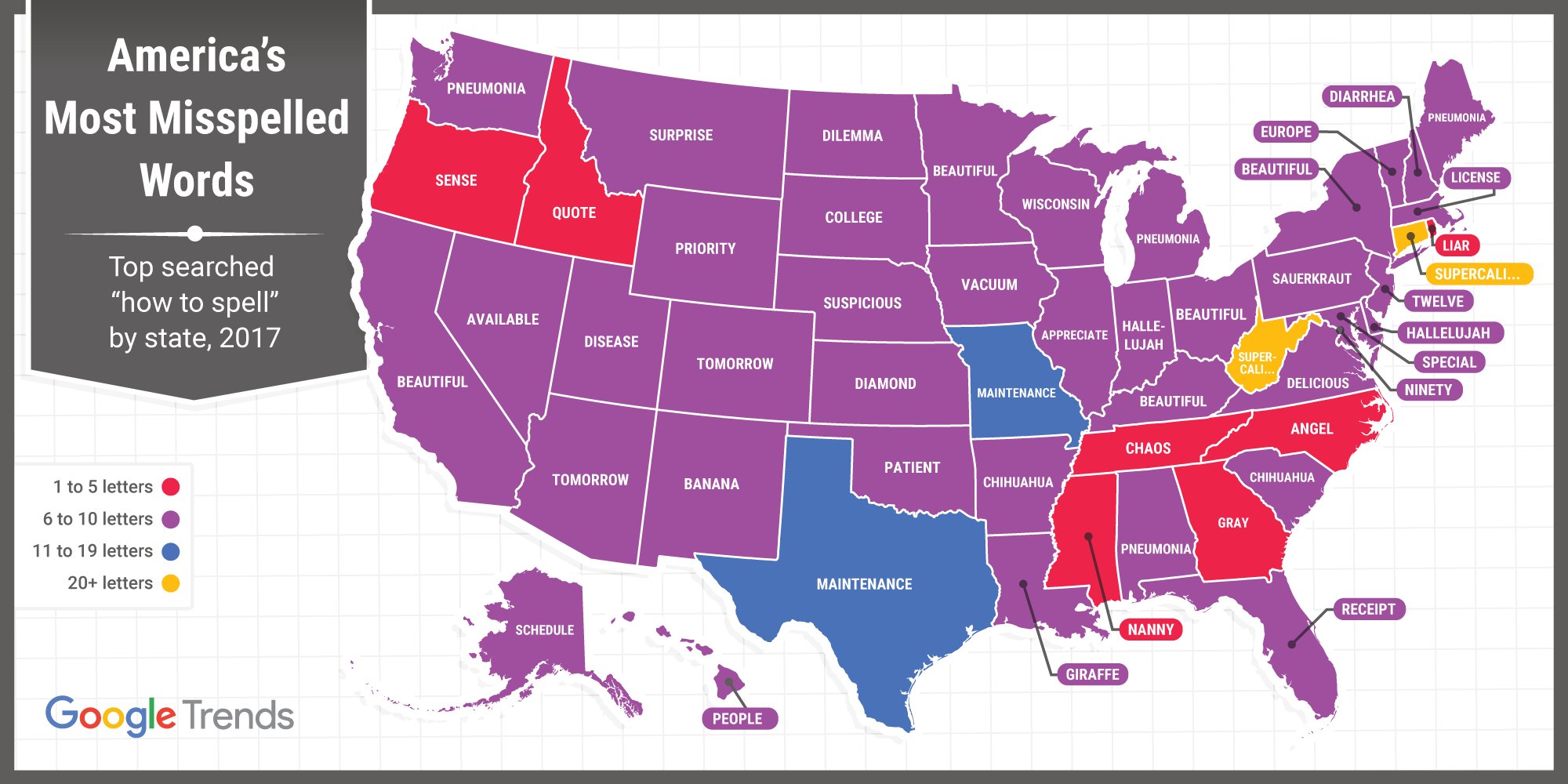 Black Student, Teacher Have Heated Debate Over Use of N*Word

A white teacher defended the use of the N-Word as being commoditized and meaningless anymore. A black student was having none of it.

Seems to me, it is a valid academic discussion. Here is hoping that the administration uses this as a teaching moment instead of penalizing either the Teacher or Students.

Students angrily confronted a white New Orleans teacher who insisted he could use the most notorious racial slur because it had been drained of its meaning through overuse.

“That’s racist as sh*t,” one black student says to the teacher, identified only as “Coach Ryan.” “Why can you not understand that it’s racist for a white man to say ‘n****r’ to a black man? It’s f*cking racist.”

The student then turns to a white classmate and asks if he’d ever use the racial slur, and the other boy agrees he would not, and the black teen then rhetorically asks the rest of his classmates if they would.

The teacher asks the teen if he knows what a “commoditized word” means, and the student asks him to explain the term.

“It’s a word that’s used so many times that it doesn’t mean its original meaning,” the teacher says. “The word has been commoditized so that anyone can use it, and it’s not a negative connotation.”

The student argues that it would have a negative connotation for the teacher to use it to describe him, but the teacher asks why rappers use the racial slur in songs.

The teen says the meaning changes, based on the speaker’s race, and the teacher insists that’s not true.

“Not if you want the world to move on,” the teacher says. “If you want this world to be the way it was 50 years ago, then you’re true — you’re right.”

The teenager tries to explain the difference between the full word, n****r, and the truncated colloquialism, n***a.

“Nobody says n****r,” the teacher says, as the teen explodes and his classmates giggle nervously.

The teacher tries to argue that he could use the word as part of an academic lesson on its history, but the student angrily slams a book down on a desk and tells the teacher to stop using the racial slur.

“Please, it’s a word,” the teacher says. “You cannot go through life acting like a word can affect you.”

Students went after class to the principal’s office to stage a sit-in, but that turned into an impromptu, hour-long assembly on race and racism, the newspaper reported.

The school, which is overseen by the Orleans Parish School Board, is one of the most diverse in New Orleans — with 40 percent white students, 31 percent black, 16 percent Asian, 7 percent Hispanic and 6 percent multi-racial.

Franklin alumni started an online petition after the latest incident pledging to withhold donations until meaningful action was taken by the school.

The teacher was not on campus Thursday afternoon, and school officials said an investigation of the incident could take several days before any potential disciplinary action was taken.