Students at Ithaca College Walk Out

There appears to be a wave forming of student protests across the country. There isn’t enough information in the following article to assess whether the students of Ithaca College are suffering the same issues as at Mizzou. Over 1,000 Ithaca Students attended the protest. 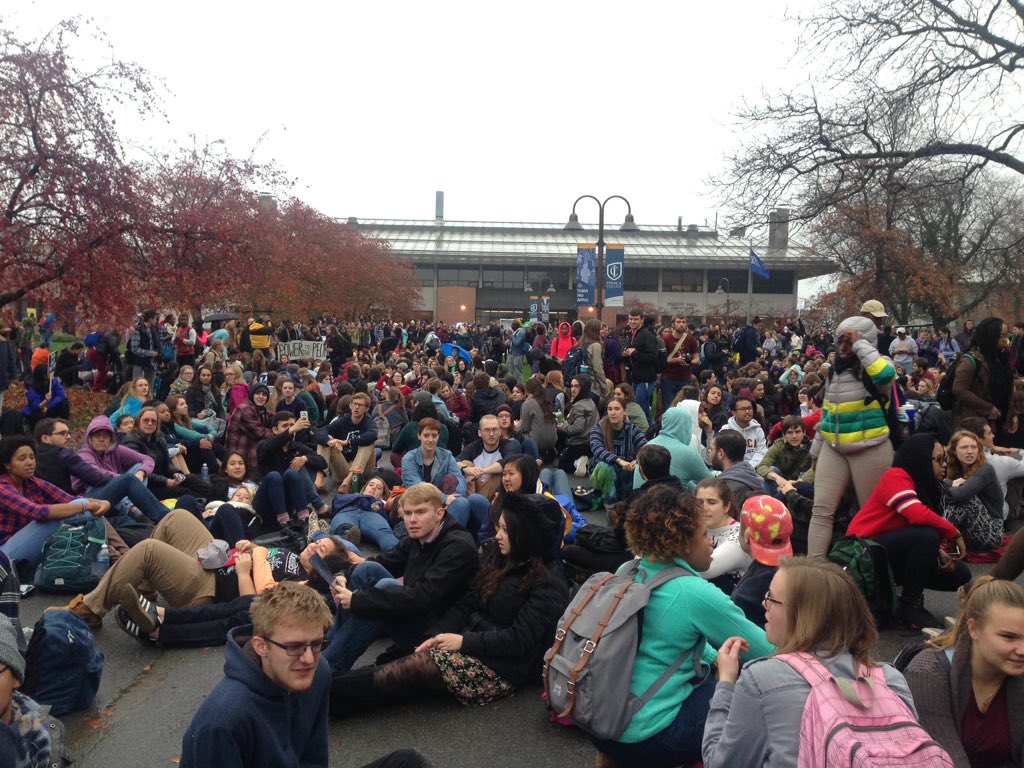 Students at Ithaca College in upstate New York are demanding that the school’s president, Tom Rochon, resign over a series of racist incidents at the school, and gathered Wednesday for a major protest on campus.

According to the Ithaca Journal, about a thousand students participated in what they called a “Solidarity Walk Out,” inspired by recent student protests over racism at the University of Missouri, as well as at Yale University and Smith College.

“We stand here in solidarity,” Brittany Gardner, a protest leader, told the group of students gathered. “Our hearts are heavy with the pain of Mizzou and Yale and Smith and every person of color on a college campus simply because of the color of their skin, the texture of their hair or their ancestry. This is a problem of the nation. However, how can a campus dedicated to preparing us for the real world not actively foster growth to our consciousness of oppression and privilege?”

This week, students at the University of Missouri protested how system president Tim Wolfeand the flagship campus’ chancellor R. Bowen Loftin had handled racist incidents at the school in recent months, ultimately forcing them to resign.

At Ithaca College, students have protested a series of race-related incidents this semester, including alleged racial profiling by campus police officers, a frat party with a theme that invoked offensive racial stereotypes, and a panel discussion during which a black panelist was referred to as a “savage.” Students say Rochon and other school administrators have not done enough to address the incidents, as well as what they see as pervasive racism on campus.

“With University of Missouri’s president stepping down, we demand Rochon to do the same as it is vital to fight against both covert and overt racism in all places of education and empowerment,” the protesters wrote on the event’s Facebook page.

Posted by btx3 on November 12, 2015 in BlackLivesMatter

Unable/unwilling to take a stand, the University President is now facing not only action by the students and athletes – but the Athletic and coaching staff…And now the Faculty and support staff. There is an ongoing pattern of on-campus incidents which have brought things to a boil.

Joining student activists, the team refuses to play until Timothy Wolfe steps down after a tepid response to attacks on blacks. Now faculty are set to join them.

There was no football practice at the University of Missouri on Sunday, but the school’s training grounds were far from empty.

Mizzou’s black players had announced a strike the day before—joining scores of student activists demanding the ouster of university president Timothy Wolfe over his alleged failure to stem a wave of racism at the predominantly white school. Of the 35,000 students at Mizzou, 77 percent are white and 7 percent are black, school stats show, while 58 of the football team’s 84 scholarship football players are black.

Instead of putting on helmets, the team posed for a group photo, arm in arm, inside an athletics facility.

“The Mizzou Family stands as one,” head coach Gary Pinkel tweeted Sunday, just after the squad’s strike made national news. “We are united. We are behind our players.”

Faculty staff announced a few hours later that they would also stage a walk out in support of the football team.

Mizzou players have vowed not to play until Wolfe, who has been the school’s president since 2012, is removed…

The gambit comes amid months of simmering racial tensions at the Columbia, Missouri, campus. Minority students say they’ve been targeted with continuing slurs and harassment—and that the response from the predominantly white university has been tepid.

Last month, a swastika scribbled in human feces was found in the restroom of Gateway Hall, a dorm offering gender-neutral suites and bathrooms that is supposed to be a “‘gateway’ for the future of inclusive living,’” the Residence Halls Association president said….

“Last night as I walking through campus, some guys riding on the back of a pickup truck decided that it would be okay to continuously scream NIGGER at me,” Head wrote on Sept. 12. “I really just want to know why my simple existence is such a threat to society. For those of you who wonder why I’m always talking about the importance of inclusion and respect, it’s because I’ve experienced moments like this multiple times at THIS university, making me not feel included here.

“Many of you are so privileged that you’ll never know what it feels like to be a hijab-wearing Muslim woman and be called a terrorist or a towel head,” Head continued. “You don’t have to think about being transgender and worrying about finding a restroom where you can go and not be targeted for violence…

“If you see violence like this and don’t say anything, you, yes YOU, are a part of the problem,” he said.

The shocking, hateful episodes on campus didn’t end there.

On Oct. 5, an inebriated white male student allegedly mounted the stage of a Legion of Black Collegians homecoming royalty court rehearsal and began spouting the N-word. The student was “moved from campus,” the Columbia Tribune reported.

Black student activists also say they faced harassment on Oct. 10, when they peacefully blocked the homecoming parade. They surrounded Wolfe’s car, but he refused to speak with them. Instead, the protesters claim, Wolfe’s vehicle hit one of their members.

Last week Friday, two female students said a drunken white man hurled a racial slur at them on a campus walkway. As a group of “four young Caucasian men” passed the women, one shouted, “You’re a n—-r!”

“We walk around this campus knowing that on any given day, there will be another racial issue,” sophomore Alexis Ditaway tweeted of the incident. “We go to classes with our white peers knowing that not only will they never understand our struggles, but many of them will refuse to try. We go to a university where the only place many of us feel comfortable is in a Black Studies class.”…