This one is unbelievable in today’s world – and even worse, the school is trying to cover it up.

A shocking lawsuit this week alleges that officials at the Live Oak Classical School in Waco, Tx. looked the other way after three white boys put a rope around a 12-year-old black girl’s neck and dragged her around.

WacoTrib.com reports that Levi McCathern, the attorney representing the girl’s family, alleges that the girl was continuously bullied even as school officials downplayed her treatment. The $3 million lawsuit alleges negligence, gross negligence and intentional infliction of emotional distress against the school.

The alleged incident took place during a school field trip to the Germer Ranch. The girl was watching some of her fellow students play on a rope swing when she suddenly felt a rope go around her neck. She subsequently slipped and fell to the ground while three white boys pulled on the rope, McCathern alleges.

“It looked like somebody had ripped her neck apart and stitched it back together,” the girl’s mother, Sandy Rougely, told The Dallas Morning News.

For its part, the school has claimed that the entire incident was an accident and the boys were just being playful when they put a rope around the girl’s neck. The Daily Beast flags some recently released emails between Sandy Rougely and school dean Allison Buras that show Buras tried really hard to downplay the seriousness of the incident.

“It sounds like he may have pushed on the back of her leg to make her leg buckle, which is something the kids sometimes do,” Buras wrote in one email. “Rarely is that done out of meanness but more out of a desire for sport.”

Posted by btx3 on June 15, 2016 in Domestic terrorism, The Definition of Racism, The New Jim Crow

The Waco Horror, and Its Aftermath

Lynching in the South was a method not only t maintain white supremacy, but to intimidate and blackmail the local minority populations into staying in line. The result of lynchings in the early 1900’s for a lot of the South was the Great Black Migration, and the loss of a large part of their workforce. One of the most violent lynchings was that of Jesse Washington in Waco Texas.

Around sundown of May 8, 1916, Lucy Fryer, the wife of a well regarded cotton farmer, was found bludgeoned to death in the doorway of her seed house. Jesse Washington, who was illiterate and branded “feeble-minded”, confessed to the murder.

Soon after a jury found him guilty, a crowd of 2,000 men seized Washington, chained him, beat him and dragged him to the town square, where he was burned.

His fingers were amputated for souvenirs and his fingernails taken for keepsakes. Finally all that was left was a charred torso, but Washington’s body parts were put in a bag so they could be dragged through downtown.

About 15,000 people, half of Waco’s population, had gathered to watch the lynching. 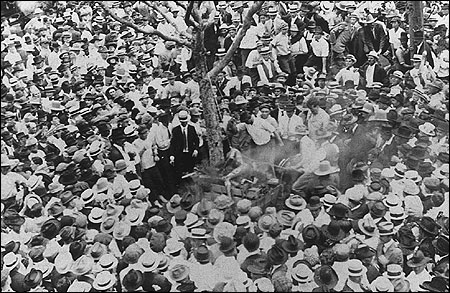 The Robinson resident grew up hearing the stories from her grandmother, a relative of the 17-year-old farmhand who was tortured to death on Waco’s town square a century ago last Sunday. The moral was never precisely stated, but the horror has stuck with Pearson all her 67 years.

Just after the boy received a death sentence for murdering his white employer, a mob seized him and dragged him to City Hall, where they doused him with coal oil and hanged him over a pile of burning wooden crates. They carved his charred body into souvenirs and dragged it around town.

But even more troubling for Pearson was what didn’t happen: Law enforcement didn’t intervene in the lynching, nor did anyone in a crowd of 15,000 spectators.

“All the folks were standing around, most of them were white, and nobody said anything, nobody stood up to try to do anything,” Pearson said in an interview with the Waco Tribune-Herald after a recent proclamation by Waco’s mayor condemning the lynching. “It’s a hurt and frustration even to think about it. … It can cause me a heavy depression.

“Every time I think about it, I get really angry and I have to ask the Lord to help me.”

White Waco spent most of the 20th century trying to forget the atrocity, dubbed the “Waco Horror” by the national press. The incident stood as a turning point in national anti-lynching efforts and helped bring to prominence the NAACP, the nation’s oldest civil rights organization. But the atrocity received no mention in local history books until the late 1960s and was largely ignored or downplayed locally until 1998, when Councilman Lawrence Johnson publicly called for a memorial to “atone” for the lynching.

Meanwhile, the story survived on the frequency of a whisper in corners of the black community, in the form of legends and admonitions to sons and daughters.

Forgetting became impossible in the mid-2000s, when a series of books, exhibits and news articles brought the incident again to national attention. In 2006, the Waco City Council and McLennan County commissioners passed a general condemnation of the area’s lynching past.

The Community Race Relations Coalition and the NAACP have headed an effort to commemorate the centennial this spring with a lecture series, a march and a push to get a state historical marker for the lynching. The observances culminated with a “town hall” meeting at the Bledsoe-Miller Community Center.

The centennial is not meant to reopen old racial wounds or cast blame on anyone now living, said Peaches Henry, a McLennan Community College assistant English professor and president of the Waco NAACP. Rather, it’s an opportunity to bring whites and blacks together to reflect on a difficult shared history.

“Here’s the importance of history: It allows us to remind ourselves of both the good and the bad, and then to correct our course,” she said.

Henry said the city and county resolution against lynching a decade ago was a good start. The question of Washington’s innocence or guilt aside, Henry said city and county leaders failed to uphold the rule of law and were complicit in a heinous crime of torture.

The recent proclamation by Mayor Malcolm Duncan Jr. went further and specifically referred to the “heinous lynching of Jesse Washington.”

“It’s important to call the names of those who were wronged,” Henry said. “The same was true of the woman (Lucy Fryer) who was murdered. She was someone’s mother, sister and cousin. She was also important. For the council to offer a proclamation naming Jesse Washington is very significant. It means that in the public record he is no longer invisible.”

Those involved in the commemorations say burying the past doesn’t keep it from haunting the present.

Scheherazade Perkins, 64, a member of the race relations board, grew up in Waco and graduated from the black A.J. Moore High School in 1969. She never heard of the lynching until she was an adult, but it helped explain anxieties she heard when she was growing up.

“Obviously there is much that has been done, much progress that has been made,” Perkins said. “But there are processes that still go on, an unspoken terror that still exists, that makes people want to stay under the radar. It makes them hesitant to come forward with concerns for fear that they will be not only labeled but mistreated.

“Some of that lingers, not only with the older people who were right on the fringes of the atrocity, but with those who pass the same sentiment down: ‘Boy, you need to watch your mouth, because you never know.’ ”

The centennial comes at a time of national debate and unrest over police killings of unarmed black males, such as Freddie Gray in Baltimore; Michael Brown in Ferguson, Missouri; and 12-year-old Tamir Rice in Cleveland. A Washington Post investigation found that 40 percent of unarmed men shot and killed by police in 2015 were black, even though black men make up only 6 percent of the population.

Henry, the local NAACP president, said she has high regard for Waco police leadership, but she still has anxieties for her own son, an Eagle Scout and college junior, wherever he goes.

“There’s the talk that every young African-American man receives: When you get pulled over, keep your hands on the steering wheel,” she said. “You never make a move without letting the officer know.

“There’s nothing about my son when he is walking or driving down the street that can protect him.”

It’s a more subtle version of the same fear that African-Americans had a century ago, Henry said…Read the Rest Here…