This is how things started, stirring up the right wing with a pleas for money. Of course this hit the right wing media such as Brietbart, who couldn’t resist throwing the right wings racial boogeyman, the New Black Panthers into the mix. Other white supremacist conservative rags followed suit to maximize the whiterage. Fox News 4 fell for the scam with a fluff piece about the man’s son dreaming of becoming a policeman, and playing up the “fact” the man is supposedly as disabled veteran.

After an investigation, police found the man vandalized his own truck, in a bid to scam the public… He had raised $6000 on Go Fund Me, as well as garnered support from local repair shops and dealerships who volunteered to fix his truck for free. He really wasn’t after getting the truck fixed though…

Playing to right wing racist hate in this country has become a box office business. 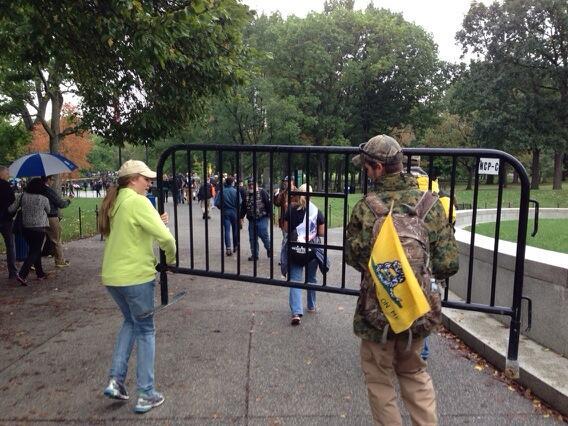 Some years ago there was an effort by the Rethugs to put Raygun’s mug on the $50 bill. Even they apparently figured out that was a dumb idea.

About a week ago, a non-profit which exists to put Raygun’s name on everything from baby wipes to tollway outhouses unveiled two new 10′ bronze statues, one in Newport Beach California, and the other disgracing our National Airport.

After the theft of a bronze church bell in San Francisco a few weeks ago, with the price or bronze scrap today – this ought to be fun!

Next Time might I suggest borrowing one of those tow trucks… And, not that I’m suggesting anything but… I just happen to know where there is an even bigger statute…

A Leaning Raygun - After an Unsucessful Attempt by a Thief to Make off With the Statue worth $60,000 Melted down

A bronze statue of former President Ronald Reagan was vandalized early Sunday, according to officials. END_OF_DOCUMENT_TOKEN_TO_BE_REPLACED

Posted by btx3 on November 7, 2011 in Stupid Republican Tricks