OK – This is a bit strange. Russian President Vladimir Putin has released a 2015 Calendar, of himself – posing in various macho activities…Topless. 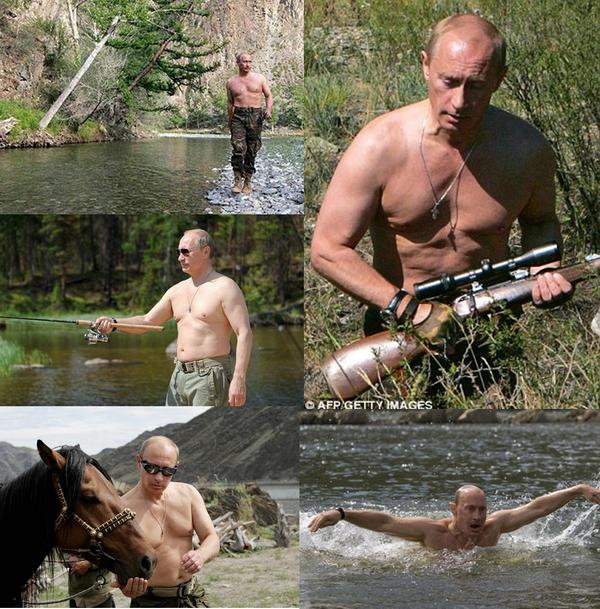 Reportedly, Trump had his private jet fueled up for a quick trip to Moscow.

Vladimir Putin appears shirtless yet again in a bizarre new calendar that’s titled “All Year With The President Of Russia.”

The Russian President fishes bare-chested in one of the snaps from the 2016 edition. Other images from the calendar posted online feature him working out, looking serious in military uniform and signing autographs for children.

But the political strongman also shows his sensitive side. There are photographs of him sniffing a flower and cuddling up to a dog.

“Dogs and I have very warm feelings for one another,” he’s quoted as saying in the caption.

Other words of wisdom include the menacing-sounding, “no one will ever get military superiority over Russia” and the thankful, “I like all Russian women. I think Russian women are the most talented and the most beautiful.”

Perhaps he sent him a copy?

On…How to lose your job and career by doing something totally stupid. Truly career limiting stupidity.

It’s safe to say that physically assaulting a topless woman in Times Square was not on Mark Walters’ New York City bucket list.

The Bank of America executive presumably had plans to see “The King and I” on Broadway before wading into the chaos of Times Square on Wednesday evening to befriend its infamous street performers.

Maybe he’d have his photo taken with The Naked Cowboy, or Elmo, or even one of the bare-breasted “desnudas” he’d seen in the papers, before Mayor Bill de Blasio has them all cuffed and whisked away.

After all, 46-year-old Walters had come from sleepy Charlotte, North Carolina, where BoFA is headquartered, to the city that never sleeps. Back home, there are no topless women fleecing people for their money outside (though there are plenty doing it indoors.)

Given this rare opportunity, Walters did what any sensible senior employee at the second biggest bank in the country would do: He cozied up to two of the half-nude panhandlers, their breasts painted with patriotic colors, for a touristy photo op.

Alas, the photo op was foiled when he accused one of the desnudas, 32-year-old Lourdes Carrasquillo, of snatching his wallet, police told the New York Post. It’s unclear how she would have pulled off this sleight of hand, unless she deftly tucked it into her g-string. But Walters was so convinced that he grabbed her hair and shoved her to the ground. Another desnuda claimed he socked Carrasquillo in the face.

One of Times Square’s costumed performers, the Silver Cowboy, reportedly rushed to break up the scuffle, as did a uniformed officer nearby. Police found no evidence—nothing in her g-string or anywhere else—that Carrasquillo had pickpocketed Walters.

Walters was arrested at the scene and charged with misdemeanor assault and harassment. (Court documents say he “struck, shoved, and kicked” Carrasquillo). He was arraigned on Thursday in Manhattan Criminal Court, where Judge Felicia Mennin set his bail at $1,500, despite objections from his lawyer, Gurmeet Singh, who reportedly argued that bond wouldn’t have been necessary if “these scantily clad women” weren’t involved. (Singh could not be reached for comment.)…

While Bank of America declined to comment on Walters’s salary or misadventures in Manhattan beyond confirming that “he is an employee with the bank,” $1,500 bail is ostensibly manageable for Walters. His job title on LinkedIn is Technology Business Executive at BoFA. His base salary is roughly $213,000, with $155,000 in additional compensation tossed in, according to Glassdoor, a recruiting website with a database of 8 million company reviews, including salary reports from employees at those companies.

Carrasquillo, who was sent to the hospital on Wednesday evening with minor injuries, could not be reached for comment.

Social networking sites are buzzing with debate over a Mexican congressional candidate who released a campaign poster showing herself topless.

Twitter user Camila Deborarte tweeted “I’d vote for her.” But Itzel Garcia responded, “What a shame! Even this way, she has to call attention to herself.”

Juarez is running on the ticket of the leftist Democratic Revolution Party. She is shown on the poster along with six other women, all of whom are seen covering their breasts with their left hands. Some are raising their right fists.