Did Racism Cause the Shutdown?

Great article here with the most detailed history in one place I have seen about racial politics and how the party’s switched positions. Racism has been intertwined with policy at the Federal Level since before the Civil War. This article provides a great background on the what, who, and why… 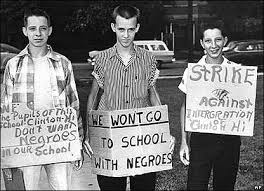 How Racism Caused The Shutdown

I understand if you’re confused. A lot of people think the only way that racism “causes” anything is when one person intentionally discriminates against another because of their color of their skin. But that’s wrong. And understanding the history of the forces that produced the current crisis will lay plain the more subtle, but fundamental, ways in which race and racism formed the scaffolding that structures American politics — even as explicit battles over race receded from our daily politics.

The roots of the current crisis began with the New Deal — but not in the way you might think. They grew gradually, with two big bursts in the 1960s and the 1980s reflecting decades of more graduated change. And the tree that grew out of them, the Tea Party and a radically polarized Republican Party, bore the shutdown as its fruits.

How The New Deal Drove The Racists Out

In 1938, Sen. Josiah W. Bailey (D-NC) filibustered his own party’s bill. Well, part of his party — Northern Democrats, together with Northern Republicans, were pushing an federal anti-lynching bill. Bailey promised that Southern Democrats would teach “a lesson which no political party will ever again forget” to their Northern co-partisans if they “come down to North Carolina and try to impose your will upon us about the Negro:”

Just as when the Republicans in the [1860s] undertook to impose the national will upon us with respect to the Negro, we resented it and hated that party with a hatred that has outlasted generations; we hated it beyond measure; we hated it more than was right for us and more than was just; we hated it because of what it had done to us, because of the wrong it undertook to put upon us; and just as that same policy destroyed the hope of the Republican party in the South, that same policy adopted by the Democratic party will destroy the Democratic party in the South.

Bailey’s rage at the affront to white supremacy was born of surprise. Until 1932, the South had dominated the Democratic Party, which had consistently stood for the South’s key regional regional interest — keeping blacks in literal or figurative fetters — since before the Civil War.

But the Depression-caused backlash against Republican incumbents that swept New Yorker Franklin Roosevelt into the White House and a vast Democratic majority into Congress also made Southerners a minority in the party for the first time in its history. The South still controlled the most influential committee leadership votes in Congress, exercising a “Southern Veto” on race policy. The veto forced FDR to stay out of the anti-lynching fight (“If I come out for the anti-lynching bill, [the southerners] will block every bill I ask Congress to pass to keep America from collapsing,” he lamented).

The veto also injected racism into the New Deal. Social Security was “established on a racially invidious, albeit officially race-neutral, basis by excluding from coverage agricultural and domestic workers, the categories that included nearly 90 percent of black workers at the time,” University of Pennsylvania political scientist Adolph Reed Jr. wrote in The Nation. “Others, like the [Civilian Conservation Corps], operated on Jim Crow principles. Roosevelt’s housing policy put the weight of federal support behind creating and reproducing an overtly racially exclusive residential housing industry.” END_OF_DOCUMENT_TOKEN_TO_BE_REPLACED

No more Head Start. in some states like this safety class in Adrian, Missouri..

Gobsmacked Gumbo Gohmert And the 50 Shades of Stupid

Louie Gohmert: Obama Has Stirred Up More ‘Racial Tension And Violence’ Than Any President Since The 1960s

Rep. Louie Gohmert (R-Texas) accused President Barack Obama of being a driving force of “racial tension and violence” in the nation during an interview this week, arguing that his administration was the worst since the 1960s on the issue.

In an appearance on conservative host Steve Malzberg’s show on Monday, first caught by Right Wing Watch, Gohmert began by railing against the move this week by Attorney General Eric Holder to reform the judicial system, claiming that the administration was circumventing federal law on areas like mandatory minimum sentences for nonviolent drug crimes.

But Gohmert saw a silver lining in the Department of Justice release announcing the change, saying that Holder had finally admitted that “violence is down,” even though the administration has attempted to push further anti-violence measures. The outspoken Republican went on to directly blame Obama for what he saw as growing racial division:

“I tell you what though, in that release there was a great statement that I’m glad somebody in this administration finally admitted because they’re constantly screaming about all the hate violence and all of this kind of stuff,” Gohmert said. “Of course we know that this president, this administration has done more to stir up racial tension and violence than any administration since, you know, the sixties. I thought that we were going to have a post-racial president and he’s become the president of division, of envy, of jealousy.”

The 1960s were monumental for civil rights progress. In 1963, President John F. Kennedy forced segregationist Alabama Gov. George Wallace to comply with federal court orders and allow two African-American students to register for courses at the University of Alabama in Tuscaloosa. It was the second time in two years he’d faced down a southern governor, forcing them to desegregate a public institution. Hours after the Alabama incident, Kennedy addressed a national audience and outlined his a federal blueprint to ensure further integration.

President Lyndon B. Johnson picked up Kennedy’s civil rights mantle in the middle part of the 1960s, successfully ushering through the Civil Rights Act of 1964, which outlawed most forms of racial segregation. He built upon his record a year later, overseeing the passage of the Voting Rights Act.

While both the Kennedy and Johnson administrations made clear federal strides on civil rights, the decade was also stricken with racial tension and violence as many parts of the nation were forced to meet their racist tendencies head-on.

Gohmert’s remarks on race also echo those made by a number of conservative Obama opponents, particularly in the wake of the president’s decision to inject himself into the debate over Trayvon Martin, the unarmed Florida teen slain by George Zimmerman last year. Obama weighed in on the issue again following Zimmerman’s acquittal, sparking sharp reaction from predominantly white conservatives who argued that racism was over in the nation, and that Obama was only making things worse by discussing racial bias.

Even the Right Hates the Right

The FBI says a Tennessee man has been charged with threatening the family of House Majority Leader Eric Cantor of Virginia.

He is accused of leaving two voicemail messages at Cantor’s office in suburban Richmond on the evening of Oct. 27. In the profanity-laced messages, the caller calls Cantor “Jew boy.” He also says he is going to destroy Cantor, rape his daughter and kill his wife.

Cantor spokeswoman Laena Fallon said the Republican congressman had no comment on the threats.

Yes there are black folks in the Occupy Movement – including Occupy Wall Street, despite the disparagement by conservatives that the movement is made up of privileged white kids. This video alone has more black folks than the entire Glenn Beck Tea Bagger rally on the mall last year on MLK’s Birthday.

The Black Women of Occupy Wall Street, posted with vodpod

Posted by btx3 on November 4, 2011 in Occupy Wall Street, The Post-Racial Life

These whack jobs are dangerous. This one went from Georgia to Tennessee to a Court House looking for an armed confrontation with police…

From this video in 2010, apparently there has been some concern by authorities about Huff for a while. That would put him even at the fringe of even a far right group like the Oathkeepers.  What Huff doesn’t say in the video is Huff told authorities he was going to take over the town, with the assistance of some militia groups.

FBI agents interviewed Huff at his home on April 19, and Huff said he would be traveling to Tennessee to help Fitzpatrick get the charges against him dropped. Huff told agents there would be no violence unless they were provoked into violence.

Still, he told agents he planned to travel with his Colt .45 handgun and AK-47 rifle. The FBI monitored Huff and observed him leaving his house around 6:15 am on April 20. The Tennessee Highway Patrol pulled him over for various traffic and registration violations.

The troopers said Huff volunteered that he planned to travel to Madisonville to take over the courthouse, to arrest the people on Fitzpatrick’s warrants–who he termed “domestic enemies of the United States engaged in treason”–and to turn those arrested over to state police to place in jail.

KNOXVILLE, Tenn. — Prosecutors described a frightening standoff at a Tennessee courthouse between law enforcement and an armed man who vowed to take it over in his quest to oust President Barack Obama. The man’s attorney said he was just a “loudmouth” expressing his political opinions.

The defense didn’t work for Darren Wesley Huff, who was convicted Tuesday on a federal firearms charge that could send him to prison for up to five years.

Huff, 41, was armed with a Colt .45 and an assault rifle on April 20, 2010, when he and about 15 others, some also armed, arrived in Madisonville, a small town about halfway between Knoxville and Chattanooga. END_OF_DOCUMENT_TOKEN_TO_BE_REPLACED