As any Policeman in the world ought to know, elderly people with Dementia can be hard to deal with. They are in their own world. They are frightened by new situations, and become extremely uncomfortable if removed from the environment they are used to. This poor guy posed no risk to anyone except possibly himself. In any event, hitting someone in their 80’s or 90’s is tantamount to attempted murder – as the taser can shut down any heart devices they may have implanted. And it is fairly easy for the seizure caused by a taser shot to break fragile bones.

Another incident of Cops going crazy.

My question is…Why did the nursing home people call the cops? Often, you can change a person ‘s mind who is suffering from the disease by something as simple as waiting 10 minutes.

And yeah, this is under Black Lives Matter – making Cops responsible, and getting them the correct training doesn’t just help black folks.

Body camera video is now available from the Ottawa County Sheriff’s Office of an incident in March in which officers used a taser on a 91-year-old man with Alzheimer’s at a nursing home.

Police were called because the Minneapolis man wouldn’t get into the car to go to the doctor, KWCH reported. At the time of the incident, the sheriff’s office claimed that the elderly man was violent but the videos show a different story.

The 28-minute long video shows the man repeatedly refusing to leave. Sitting in a char in his room, he was batting at officers as they attempted to try and help him up. Then he begins to run away. The undersheriff then tased him and the man was taken out on a stretcher.

The family of the man asked that the video not show the man’s identity. They also revealed that the handcuffs broke his wrists and they think the incident weakened his heart and lead to his death two months later.

The Sheriff’s office is closed for the holidays, but in March Police Chief Jon Strowig said that there would be an investigation.

“There was forced used, and that’s currently under investigation,” he said simply.

Posted by btx3 on December 23, 2016 in BlackLivesMatter

At some point the City Mayors, councils and elected figures have to be held into account for this.

WATCH: Cops hold man down and sic K-9 on him after beating him — for dancing in a parking lot

A Washington man has settled a lawsuit with the city of Tukwila after police officers assaulted him following a complaint that he was dancing in an industrial parking lot, reports the Seattle Times.

The city will pay Linson Tara $100,000 to settle a civil-rights lawsuit filed after the officers used Tasers, their fists and then a police dog on him while he was being restrained.

Tara was facing three counts of fourth-degree assault on police officers, but those charges were dropped when dash cam video showed one of the officers holding Tara on the hood of the police cruiser while his partner used a Taser on him.

Tara can then be seen being thrown to the ground with the two cops piled on him as one punched him repeatedly while the other held him down.

During the entire altercation a police dog is heard frantically barking and appears on screen after being released from the cruiser where it proceeds to attack Tara as he is restrained.

One officer can be heard telling Tara, “Put your hands behind your back and I’ll take the dog off.”

Tara was later transported to a local hospital treated for injuries that included dog bites.

In  the police report, officers Brent Frank and Mike Boehmer stated that they had been called to the parking lot after receiving a report that Tara was “walking around, yelling and dancing.”

According to the lawsuit, the officers used excessive force, noting that by the time Tara was rolled over he appeared to be unconscious.

The lawsuit also challenged the the city’s policy of allowing police dogs to bite suspects as a “pain compliance” technique.

The department previously found the officers’ use of force, including the deployment of the K-9, to be within their guidelines.

Geez… A woman working as a Janitor at a school at night, mopping the floor, hears a noise and looks up and see’s two cops coming toward her with guns drawn.

What would she possibly be worried about?

In Guatemala where she is from – the cops might rape her, or give her a hard time then let her go on with her work…

Here in America the cops might rape her, robe her, smash her face to the ground for no reason, taser her for not understanding English, or shoot her as she set the mop handle against the wall to talk to them confusing the mop with an imaginary gun…And arrest her for no reason costing her her job.

Two Tennessee cops are being criticized for excessive force for Tasering a 36-year-old middle school cleaning woman after they confronted her at night in the otherwise empty school.

Juana Raymundo, originally from Guatemala, has been charged with evading arrest after she ran from the police who thought she was a burglar — despite seeing her cleaning supplies in the hallway — reports the Times Free Press.

According to the police report, Sgt. Jamie Heath and Officer Brian Desmond entered Ooltewah Middle School at 8:30 in the evening earlier this month after noticing a door to the school was left open.

Inspecting the school with their guns drawn, they spotted the cleaning supplies in the hall way before encountering an empty-handed Raymundo who appeared, “nervous and somewhat reserved.”

The officers state that they didn’t point their weapons at the woman as they attempted to question her in both English and rudimentary Spanish — saying she kept repeating “no” as she moved away from them, turning a corner and then running away as Heath yelled at her to stop in Spanish.

According to the two cops, they  chased her through the school’s cafeteria, down a flight of stairs and out the building and into the parking lot where Heath warned her to stop or he would use his Taser

Heath said he then used his Taser as he chased her, causing her to fall to the ground.

The officers state they then called for medical back-up.

Investigators afterward said that Raymundo — who works for an outside cleaning service — has difficulties understanding both English and Spanish.

While the Collegedale Police Department’s use-of-force policy allows officers to move beyond verbal commands when a subject is fleeing, a Nashville attorney who specializes in immigration and civil rights questioned their report by calling it “defensively written.”

“This is a pretty defensively written report,” attorney Andrew Free said. “I wonder if this is the same attention to detail that the officer gives every affidavit of complaint. And if so, why wasn’t there more attention to detail noting whether they identified themselves as they were sweeping the building?”

According to Maria Haberfield, a professor of police science at John Jay University in New York City, she thinks the police went overboard in their use of force.

“This was just an open door,” Haberfield explained. “There wasn’t a report of burglary; there was a report of an open door. The officers didn’t witness any extreme acts of vandalism or see that the computers were ripped out — there has to be some correlation between what they witnessed and the response.”

Collegedale Police Assistant Chief James Hardeman said the department has not received a formal complaint against the officers and declined to comment on the woman’s arrest since her court appearance is still pending.

The Times Free Press reports that Raymundo was released on $750 bail and is expected back in court on March 2. 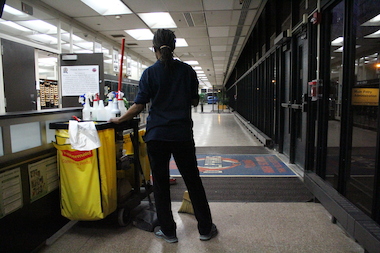 Notice to particularly stupid Tennessee cops – this is a janitor. They tend to wander around in buildings in the middle of the night…To clean things. You can tell by the cart.

Posted by btx3 on February 1, 2016 in BlackLivesMatter

Here we go again, with the same Police Department as arrested Sandra Bland on diaphanous reason.

Texas councilman seen on video being tased by police

A video out of Prairie View, Texas, is raising questions about police use of force. A councilman is seen getting tased while on his knees and with his back to officers. Police say he was resisting arrest.

Jonathan Miller, 26, was on his knees with his hands by his side when he was tased on Thursday night by Prairie View Texas Police.

Before using the taser, police warned the councilman, several times, to put his hands behind his back.

“He’s going to have to tase you because you’re not doing like you’re supposed to,” an officer can be heard saying on camera before tasing him.

“I live here man, I live here,” Miller is heard saying after being tased.

“I told you to back off and you didn’t listen,” said one of the officers.

Officers arrived at the scene to question Miller’s fraternity brothers, who were outside of Miller’s home. Miller came out to ask what was going on.

“I’m not trying to be combative or anything,” Miller told officers before being tased.

“I understand you’re coming in at the tale end of it,” a female officer replied. “I just told you everything is okay. They already explained everything to me.”

But the situation escalated when another officer asked Miller to move away.

“Go over there before you go to jail,” a male officer said to Miller.

Miller just stands and looks at the officer.

He was tased, arrested and spent the night in jail…

Coincidentally, the female officer in the body camera video is the same one who transported Sandra Bland to a county jail after she was arrested in July. Bland made national headlines after authorities say she hanged herself while in jail.

If I were that Councilman, that Police Chief better have a really good car repair shop, and be real comfortable with what he is making now…Because it will be 2050 before he gets any new cars, or a raise.

Posted by btx3 on October 12, 2015 in BlackLivesMatter

Geez…Another bad cop. At least, unlike in some parts of the country the Police Force sin’t putting up with it – or trying to lie about it and cover it up…

A Tampa Bay area police officer has been fired following an internal investigation that revealed he used inappropriately used a stun gun on a suspect.

The Tampa Tribune (http://bit.ly/1O9eCqb ) reports Zephyrhills Officer Tim Claussen was fired Thursday. He had been on administrative leave since the Sept. 11, two days after he went to the suspect’s home to investigate a retail theft.

Police said a review of video from a camera on Claussen’s stun gun “clear shows the subject displaying no active physical resistance” toward the officer.

On Sept. 9, Lester Brown was tracked down by Claussen for allegedly shoplifting from a Bealls department store, a misdemeanor if Brown indeed committed the crime .  In his report, Claussen writes he deployed the taser because Brown wasn’t following instructions or showing both his hands.  The video shows Claussen lied. The police department said that Claussen had been investigated for excessive force in the past, but those claims were found to be unjustified.

Posted by btx3 on October 7, 2015 in BlackLivesMatter

A few years ago a fan decided to run onto the field at an NFL Game. One of the linebackers hit him with a shot that put him on his ass.

This “fan” decided to disrupt a Phillies baseball game.

Yeah, I know Tasers are dangerous. But some folks need a good shot in the ass!