One of the things Rev Al Sharpton has been effective at is going after the advertising base of offending media.Don’t think ESPN is coming from the same sewer as a Rush Limbaugh or other white-wing racist propagandists though. They appear to be just (poorly) trying to protect themselves from the political maelstrom. Could be interesting…

Posted by btx3 on October 10, 2017 in BlackLivesMatter

Over the Top at Citadel

This one seems to be a bit overheated. Unless there is more evidence than just a bunch of cadets dressing up in silly costumes, open to mis-interpretation  that offended someone were trying to “deliver a racial message”  – I don’t see any fire here. Silly, perhaps stupid – but where is the tie in that this group of cadets were trying to deliver anything but some cheer? I mean these are college kids, who consistently do stupid things without thought of consequence, or how someone may misinterpret their actions.

The Citadel, the Military College of South Carolina, was forced to suspend eight cadets on Thursday after photos of an apparent hazing ritual surfaced online showing the cadets donning all-white, with white pillowcases over their heads.

“A social media posting, which I find offensive and disturbing, was brought to my attention this morning,” retired Air Force Lt. Gen. John Rosa, the president of the college, said in a statement on Thursday announcing the immediate activation of suspension proceedings for at least eight cadets and investigation into the images.

“Preliminary reports are cadets were singing Christmas carols as part of a ‘Ghosts of Christmas Past’ skit,” he wrote in a Facebook post, adding that the costumes were pillowcases. “These images are not consistent with our core values of honor, duty and respect.”

According to Charleston station WCIV, the images were discovered by an African-American woman on the social media site Snapchat.

“I screenshotted and decided to share because I was so offended,” she wrote, posting the images to Facebook this week. “Was this their idea of some kind of joke?”  WCIV reports the woman was later “threatened, harassed and offered money from numerous Citadel Cadets to take it offline in order to not ‘ruin their lives.’”

I think this woman, if she is a Cadet – is in for a hard time in the military. Without some sort of supporting information of nefarious intent, she has done more harm than good. It seems that we are drifting here from “I know racism when I see it”…to seeing racism everywhere.

This one is so ridiculous, it just makes you mad…

Hand signals are used in basketball frequently to signal the next offensive play, or defense. That is done because in an enclosed stadium simply shouting won’t be heard by the other players over the noise of the crowd. Hand signs are also used by players as signs of success at a particular move or goal (to the crowd), or taunting another player.

A Wisconsin school district is standing by its decision to suspend two black basketball players because the signals they were making with their hands looked gang-related, saying that proper procedure was followed, the Raw Story reports.

It all started at the beginning of the month when a local newspaper, the Sheboygan Falls News, ran what was supposed to be an upbeat story about three brothers, Jordan, Jamal and Juwaun Jackson, who moved to the district and now play basketball with Sheboygan Falls High School. As is normal, the paper did a mini photo-shoot for the article, and ultimately the decision was made to publish a “goofy” picture of the boys fooling around in their team’s uniform, making gestures with their hands.

However, things didn’t end up well for the boys. The high school suspended two of the brothers because parents who saw the story in the sports section of the paper thought the boys were making gang signs. The police department was even called in to investigate at the school’s request, the Raw Story notes.

“I did it like every other kid does it when they make a three [pointer],” Jordan Jackson explainedto TMJ News. “When you make a three, everyone does this sign. You’ve probably seen LeBron James or someone do it. I did the three in the picture, and my little brother pointed at the camera.

“I had no idea, they told us it meant blood,” he said referring to infamous Bloods gang.

Jean Born, the district superintendent, is sticking firm to the decision, saying that the school followed the athletic code. Police Chief Steve Riffel claimed that he was “able to confirm that the sign was indeed a gang sign,” even though he admitted the boys weren’t a threat.

The Sheboygan Falls News is siding with the boys on this issue, shocked at the mess the article has caused, expressing their disappointment in the school.

“The sign made by Jordan Jackson (on the far left side of the photo) is also commonly used by NBA players, such as James Harden, Lebron James and Brandon Jennings, after making a three-point shot,” the paper’s editor, Jeff Pederson, wrote in a Facebook post on Thursday. “The good intentions surrounding a positive article about high school student-athletes adjusting to a new school and contributing to an SFHS sports program has somehow taken an ugly turn.

“We are disappointed and saddened by the negative reaction and subsequent outcome, which has resulted in two high school basketball players being forced to miss a game against the team’s biggest rival,” he added. “In my 20 years in mainly small-town newspaper journalism, I have fielded plenty of complaints from readers. However, I have never seen anything published in a paper I have been a part of escalate to this very unfortunate and negative magnitude.”

The ACLU of Wisconsin has also stepped up in the boys’ defense, saying that they will be investigating the case themselves.

“It appears as if the Sheboygan Falls school district and police department are unprepared to respond to the increasing diversity in the schools in an appropriate and educationally sound manner,” ACLU Executive Director Chris Ahmuty said, according to the Raw Story. “The ACLU will be seeking information from the schools in order to assess their compliance with pupil non-discrimination rules. The ACLU asks the district to immediately make the brothers eligible to play in tomorrow’s game.”

Now, I don’t know where they recruited this particular group of school administrative morons from but obviously they have never attended a Wisconsin-Michigan Game… 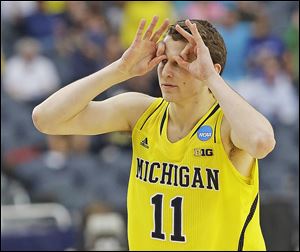 Wisconsin Badger Frank Kaminsky makes a “gang sign” after making a 3 pointer. Michigan’s Nick Stauskas with “3 points in your eyes”

Or a pro game.

White reporter interrupts the Pressident of the United State in the middle of a speech shouting absurd questions… And his publication nearly breaks a leg in the rush to defend the poor “put upon” reporter.

Black reporter tells the truth about Romney…And they fire him.

Politico has suspended White House correspondent Joe Williams following his implication that Mitt Romney is only at ease among “white folks.” Williams told Martin Bashir on MSNBC yesterday that Romney is “very, very comfortable … with people who are like him,” Thus he can be “awkward” in town hall meetings, but “when he comes on Fox and Friends, they’re like him, they’re white folks who are very much relaxed in their own company.” Daily Intel points out that a Romney penis joke Williams made on Twitter only added fuel to the fire. And so Politico responded. Williams’ comments “fell short of our standards for fairness and judgment in an especially unfortunate way,” Politico bosses wrote in a staff memo. “An unacceptable number of Joe Williams’ public statements on cable and Twitter have called into question his commitment to this responsibility,” they noted. “Following discussion of this matter with editors, Joe has been suspended while we review the matter.”

Now – couple of things here. What’s the deal with folks saying stupid things on Twitter? Are people actually stupid enough to believe you can’t make a complete jackass of yourself in only 148 characters?

Second – What Joe said is that Romney is only comfortable around folks like himself – Not that he is a racist like most conservatives.

Not sure how that is grounds for “suspension”. Is Politico trying to say it is superior to the Daily Caller because it polices its journalists? I think a 20 second read would obviate the need for that excuse.

They done lost their gourds over there at TV left!

MSNBC is about as UN-Partisan as Faux News. The difference being at least MSNBC requires their journalists adhere to a minimum standard of not making up the “news” out of the substance induced rantings of some whack job. Other than that, MSNBC’s slant is decidedly progressive – a great counter to the neo-nazi and racist frothings on Faux.

Does anyone seriously believe that MSNBC is going to come out with a positive article on the mind-numbing stupidity of future Republican Speaker Boner?

Getting that “Smile like Bob”…means you are out of the Olympics!

LaShawn Has that "Bob Smile".

U.S. Olympic gold medallist LaShawn Merritt faces a suspension of up to two years after testing positive for banned steroids, which he said was the inadvertent result of taking an over-the-counter “male enhancement” pill.

In a statement issued through his attorney, Merritt said he has accepted a provisional suspension after drug tests found the steroids DHEA and pregnenolone in his system.

“To know that I’ve tested positive as a result of product that I used for personal reasons is extremely difficult to wrap my hands around,” he said. “I hope my sponsors, family, friends and the sport itself will forgive me for making such a foolish, immature and egotistical mistake.”

Merritt, 23, won gold medals in the men’s 400 meters and 400-meter relay at the 2008 Beijing games. The statement said the use of the substance “was completely unrelated to athletics, and occurred at a time that he was neither seriously training nor competing.”

His lawyer, Howard Jacobs, said Merritt could be suspended for up to two years once the U.S. Anti-Doping Agency completes its probe. Merritt was notified of the positive result in March after tests in October, December and January, and the runner was “shocked and saddened” by the news, Jacobs’ office said in a statement issued Thursday afternoon.