Stacy Who? Gets Booted From Fox News

After dredging the sewers for Uncle Toms during the run up to the “election”, apparently Faux News has decided to do a Lawn Jockey reduction. First to be disappeared…Stacy Who? Dash. Employment opportunities are looking dimmer than midnight for the next 4 years.

Omarosa better look out too – because if she doesn’t get a job serving coffee in one of those short Maid’s outfits in the Whites Only House… She is next. 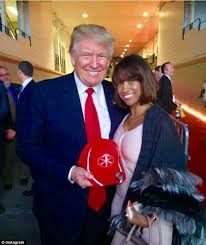 Stacey Dash may continue speaking her mind on politics and the news of the day, but it won’t be for Fox News.

Dash, the conservative-leaning actress and alumna of Paramus High School most widely known for her role in the 1995 film “Clueless” opposite Alicia Silverstone, joined Fox News as a contributor in 2014. During that time, Dash, who appeared on various Fox programs including “Outnumbered,” often drew the ire of social media. She was criticized for her controversial statements about the Oscars (she rejected a boycott of the ceremony due to lack of diversity in the nominees and later appeared in a Oscars bit as the new director of a minority outreach program, Black History Month (she doesn’t think it should exist) and BET (she doesn’t think it should exist, either).

In 2015, Fox suspended Dash after she used profanity in criticizing an address President Barack Obama delivered in the wake of the San Bernardino shooting. In 2016, Dash suggested that transgender people should go to the bathroom “in the bushes” rather than use bathrooms corresponding to their gender.

Dash’s memoir, “There Goes My Social Life: From Clueless to Conservative,” addressed the advent of her relationship with Fox, which arrived at a good time for her, after she endorsed Mitt Romney for president in 2012 with a highly scrutinized tweet. (Dash said she had voted for Obama in 2008.)

“On the day that I spent my very last dollar,” she wrote, “the Fox check came.”

Posted by btx3 on January 23, 2017 in Black Conservatives

Stacy Who? Joke at Oscars

This one was a shot, probably missed by many in the audience and public, at black conservatives being used as front men in politics and some corporations, the fake “Diversity” efforts of tech firms an the media, and the lack of sincere effort by white dominated industries (including Hollywood).

Slate picked it up for the culturally uncognizant –

At Sunday’s Oscars, Stacey Dash popped onstage with Chris Rock—as the “new director” of the Oscars’ “Minority Outreach Program”—to say one thing: “I cannot wait to help my people out. Happy Black History Month.” If you were left scratching your head, here’s a quick explanation.

It all started in January, when, in response to the #OscarsSoWhite controversy, Dashtold Fox & Friends that the BET Awards and Black History Month should be done away with:

Because we have to make up our minds. Either we want to have segregation or integration. If we don’t want segregation, then we need to get rid of channels like BET and the BET Awards and the Image Awards, where you’re only awarded if you’re black. If it were the other way around, we would be up in arms. It’s a double standard.

For her part, Dash has also already issued an explanation of her Oscars moment. From Patheos:

When they added ME to increase the diversity, I’m sure many black people rolled their eyes. I’m not “black enough,” they say. But guess what? I’ve heard that all my life. I would rather be a free thinking, black than a cookie cutter black who thinks—and votes—just like all my friends.

Backstory aside, Dash’s appearance at the Oscars was a joke that, for the most part, those outside the sphere of Black Twitter might not have understood. In some ways, bringing Dash into the fold for a joke the white audience wouldn’t necessarily understand might have been Chris Rock’s biggest coup so far.

Posted by btx3 on February 29, 2016 in BlackLivesMatter