If you have a chance to travel to Europe, check out the local TV. The Ads, particularly on British TV are 10 cuts above most of what you will see in America. This is the new British Stansbury Christmas Ad which is making waves felt in the US already – If you are a cat owner, you probably will recognize a little of Mog in your own cat.

Department Store John Lewis is known for some of the best ads annually. This certainly beats the hell out of the jingle driven drivel presented on US TV –

This one from the Lottery company in Spain. It engages the watcher by telling a story in one minute –

And this from German Grocer LIDL and it’s “Christmas Class”

Apparently, the concept of grabbing the audience with quality over quantity sailed over our advertiser’s heads. As advertisers on cable now chew up 20 minutes of an hour program – maybe these clowns could learn something about why folks are increasingly buying ad blockers and watch commercial free on the Internet. Familiarity, in terms of ceaselessly being bombarded with the same poorly constructed information indeed breeds contempt.

Posted by btx3 on November 18, 2015 in The Post-Racial Life, Uncategorized

And you thought the economy was bad in Greece!

Spanish Skyscraper, InTempo, Has One Tragic Flaw – No Elevator! How Did Architects Forget A Lift For The 47-Story Benidorm, Spain High-Rise?

A 47-story Spanish skyscraper has been built, it seems, without an elevator. Yep, you read it right folks. InTempo high-rise in Benidorm, Spain, whose construction began with high hopes of being “an unquestionable banner of the future,” has been constructed without a proper elevator to travel all the floors of the 47-story skyscraper. Sadly, this tragic oversight may soon make the structure, and Benidorm itself, the laughingstock of the modern world. Though the project has been riddled with problems since day one, the recent discovery that such a vital usability feature as an elevator was overlooked may just put the kibosh on the whole thing, certifying it as a fail of epic proportions.

So let’s just take a step back and figure out how the architects managed to build a 47-story skyscraper without an elevator. I mean surely that should be a standard component of any set of high-rise building plans right? It appears, when InTempo’s construction first began, the Benidorm, Spain skyscraper did include an elevator — at least for the first 20 stories anyway. However, multiple problems arose in the construction process, putting the building completion four years behind schedule. In 2009, just before the skyscraper was to be completed, the construction firm building the 47-storystructure, Olga Urbana, went bankrupt.

With much work still undone, some of the workers who were part of the now bankrupt Olga Urbana firm decided to open a new firm and try to get the InTempo completed. The new firm was called Kono and picked up the work in 2010.

Unfortunately, this was only the beginning of the troubles and complications ahead for the skyscraper, culminating in the discovery that it lacked a proper elevator. In fact, elevators had been an issue all along with this failed construction attempt. It seems that whoever was managing this project really didn’t have their head in the game because oddly enough, there wasn’t any kind of lift at all for workers until 23 stories of the skyscraper had already been built! Without even a freight elevator in place, imagine the difficulties these 41 workers must have had, trekking up and down 23 floors each day to complete their work!

The poor InTempo workers did finally get the freight elevator they needed, but unfortunately, more trouble was ahead. In July 2011, as workers prepared to build the 47th and final floor of the Spain skyscraper, a tragedy occurred. The freight elevator collapsed with 13 of the 41 workers inside. Even more frightening, however, is the fact that ambulances were unable to get to the workers due to the building having no vehicle entrance. Again, this was another brilliant attempt to save money at the expense of those working on the project.

Though workers continued to build the 47-story high rise, in 2012 an error was discovered that was the straw to break the camel’s back.

It was discovered that the design of the structure was quite shortsighted as it didn’t plan for the additional 27 stories later added to the building. Initially the InTempo was meant to be 20 stories high. However, when the building firm bankruptcy fiasco took place, plans were altered to take theskyscraper to 47 stories. The twin towers would connect in the center with a bowl construction containing communal gardens and pools.

In revamping their plans for InTempo, however, the builders forgot to properly rescale them. As a result, the 47-story Spanish skyscraper would have an elevator far to small to accommodate lifting past the 20th floor. The motor in the original elevator lacked the power needed to lift to the additional floors and there was no space to put in a larger one. This final disaster led the construction workers in charge of the project to resign citing “a loss of confidence in the developers” — um, yeah.

Even with this latest embarrassment, which leaves the building at 94 percent completion, it seems those in charge of the project are fairly oblivious to the disasters that have ensured around them. Though the skyscraper has only 35 percent of its 269 housing units sold, the completely unfazed designers continue to offer their one-bedroom apartments at an exorbitant 358,000 euros, with increments every 10 floors…

You KNOW it’s bad when…

One of those historical mysteries was the actual background of Christopher Columbus, the European credited with “finding” the Americas. Some scholars now believe that Columbus was actually Jewish, and hid his background and religion to escape persecution common in Europe at that time. This would be interesting, as Columbus is also widely seen as opening the “New World” to Christianity.

Artist depictions of Columbus landing often include Christian Symbols and the presence of the Church in the form of a Priest carrying the Cross.

Was Columbus secretly a Jew?

Today marks the 508th anniversary of the death of Christopher Columbus.

Everybody knows the story of Columbus, right? He was an Italian explorer from Genoa who set sail in 1492 to enrich the Spanish monarchs with gold and spices from the orient. Not quite.

For too long, scholars have ignored Columbus’s grand passion: the quest to liberate Jerusalem from the Muslims.

During Columbus’s lifetime, Jews became the target of fanatical religious persecution. On March 31, 1492, King Ferdinand and Queen Isabella proclaimed that all Jews were to be expelled from Spain. The edict especially targeted the 800,000 Jews who had never converted, and gave them four months to pack up and get out. END_OF_DOCUMENT_TOKEN_TO_BE_REPLACED

Foreclosing on the Dead in Spain

Damn…And you thought things were tough here in the US of A… In Spain there is going to be an upsurge in “homeless” dead people.

“Occupy” the Graveyard, anyone?

Pushed for space, a Spanish cemetery has begun placing stickers on thousands of burial sites with lapsed leases as a warning to relatives that their ancestors face possible eviction.

Jose Abadia, deputy urban planning manager for Zaragoza in Spain’s northeast, said Monday that the city’s Torrero graveyard had already removed remains from some 420 crypts, and reburied them in common ground.

He said the cases involved graves whose leases had not been renewed for 15 years or more. Torrero, like many Spanish cemeteries, no longer allows people to buy grave sites, instead leasing them out for periods of five or 49 years.

Abadia said 7,000 of Torrero’s 114,000 burial sites’ leases had run out, many of which occurred because relatives – or caretakers – had died themselves, or moved house and failed to renew the contract.

In other cases, family descendants no longer wanted to pay for relatives’ plots, he added.

Abadia said the cemetery began stepping up its search for defaulters around two years ago, with relatives or caretakers given six months to respond.

The stickering campaign was planned to coincide with the Nov. 1 Roman Catholic holiday, on which people customary visit graveyards.

He said that since then hundreds of people had rang to make inquiries about the status of their relatives’ burial sites.

It’s a case of cemetery management, “not to make money” as graveyards have limited space, he said.

Spain gets a whitewash job just in time for First Lady Michelle Obama’s vacation with the girls. Racism in Spain has been a boiling issue for several years now, with Spanish sports fans verbally attacking black athletes, and apparently the local “Po Po” harassing black visitors and tourists. Somehow I don’t think the local “Po Po” will be bothering Michelle for “Visiting While Black”.

Our First Lady Arrives in Spain - Looking Fabulous as Usual

Good news for Michelle Obama and any other African-Americans planning trips to Spain: “Racist prejudices” are—suddenly—no longer a problem, according to the US State Department. A warning on the department’s website that African-Americans who visit the country may need to fear getting arrested by prejudiced police was hastily pulled this week after it was noticed by the Spanish press, ABC News reports.

The note—put up after the arrest of two US government employees in Barcelona—was 15 months old and apparently out of date. “Somebody forgot to remove it,” explained a spokesman at the US embassy in Madrid. “We are in no way suggesting Spanish police are racist. This is an isolated incident.” Michelle and her younger daughter, Sasha, are staying at a 5-star resort on Spain’s Costa del Sol. Daughter Malia is at summer camp.

I should probably do a poll, and add one of those nifty widgets here – but the Burkini-Bikini War which has roiled France has now expanded to England and Italy!

OK, I figured the Poll Thingie out – Ladies Only!

Resulting in this article by Rachel Marsden in the UK Times – The Italians have banned the ridiculous burkini from public pools. Good for them

Now, Rachel is a conservative commentator who is CEO of GrandCentralPolitical.com a job site for politicos – seen here leaving a Canadian Courtroom after being granted a “Conditional Discharge” for harassing a Vancouver radio talk show host…

Getting fired by Faux News, and selling her ex-boyfriends clothes in an auction…

So – here’s the question, to the ladies…

Would you rather be seen at the beach in a bikini, or burkini… 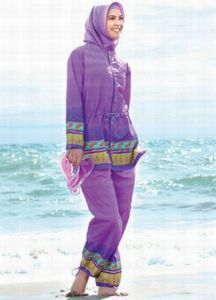 Unidentified Model in a Burkini