The State of Jones – The Insurrection Against the Confederacy in Mississippi

Here’s one you won’t see in the History Books. A new Book, The State of Jones, the Small Southern County That Seceded From the Confederacy by Sally Jenkins and John Stauffer. 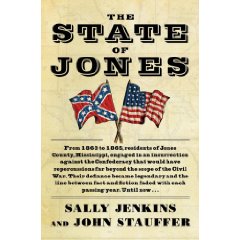 The State of Jones

Southern Historians, who have done much of the work on the Confederacy and the Civil War, have used quite a bit of revisionism to eliminate some uncomfortable facts about the South. The best known of these revisionist texts construct what is known as the Southern Myth.  Whether it’s an attempt to recast the cause of the Civil War as States Rights instead of slavery, or the conditions in which many poor Southerners and slaves lived in – the Southern Myth is a whitewash.

Make room in your understanding of the Civil War for Jones County, Mississippi, where a maverick small farmer named Newton Knight made a local legend of himself by leading a civil war of his own against the Confederate authorities. Anti-planter, anti-slavery, and anti-conscription, Knight and thousands of fellow poor whites, army deserters, and runaway slaves waged a guerrilla insurrection against the secession that at its peak could claim the lower third of Mississippi as pro-Union territory.  –Tom Nissley END_OF_DOCUMENT_TOKEN_TO_BE_REPLACED