If the Institution refuses to do the peoples work, then it is time to bring the Institution to its knees. Democrats should have been doing this all along. By any means necessary…

Civil rights icon Rep. John Lewis led the charge. “We will be silent no more.”

Democrats literally sat down on the floor of the House chamber on Wednesday — and forced the House into a temporary recess — as part of an effort to compel Republican leadership to vote on gun control legislation.

Rep. John Lewis (D-Ga.), the civil rights icon who led sit-ins all through the 1960s, spearheaded the effort with a fiery, sermon-like denunciation of Congress for its failure to act in the wake of mass shootings.

“For months, even for years, through seven sessions of Congress, I wondered, what would bring this body to take action?” Lewis said while Democrats slowly surrounded him at the microphone. “We have lost hundreds and thousands of innocent people to gun violence. Tiny little children. Babies. Students. And teachers. Mother and fathers. Sisters and brothers. Daughters and sons. Friends and neighbors. And what has this body done? Mr. Speaker, not one thing.”

After about 10 minutes of escalating questions — and shouting, “Where is our soul? Where is our courage?” — Lewis said it was time for Speaker Paul Ryan (R-Wis.) to bring up some of the pending gun control bills. In the meantime, he said, he’d just take a seat. Moments later, he sat down on the floor. And so did all the other Democrats with him.

As another Democrat began to speak, the Republican lawmaker sitting in the chair gaveled the House into a temporary recess until noon. The House cut off the C-SPAN cameras that normally broadcast the floor. Later, when lawmakers reconvened, Democratic members still refused to budge, forming a circle in the well of the floor while chanting. Republicans were forced to gavel into recess once more.

It’s not clear what GOP leaders plan to do now.

“The House cannot operate without members following the rules of the institution, so the House has recessed subject to the call of the chair,” said Ryan spokeswoman AshLee Strong.

In the absence of cameras, Rep. Scott Peters (D-Calif.) broadcast clips on Twitter of members speaking. C-SPAN then broadcast Periscope and Facebook Live streams of the action.

Lewis’ effort was a dramatic attempt to force the hand of Republicans before the chamber adjourns later this week for a weeklong recess. But it’s not the only disruption House Democrats are planning. According to multiple aides and lawmakers, Democrats will try to essentially hijack the House floor both Wednesday and Thursday in an effort to get gun control measures a hearing.

The “No Bill, No Break” campaign centers on clever and repeated use of procedural rules. Assistant Democratic Leader James Clyburn (D-S.C.) has already tried and failed, twice, to bring up legislation to deny people on the no-fly list the right to purchase a firearm.

But the extent of the party’s plans has been kept largely under wraps out of concern that Republicans would move to undermine the strategy. Several aides have described it as a “disruption” campaign. One Democratic lawmaker said the party was “devising a variety of parliamentary tactics to pressure the GOP in D.C. this week, then in individual districts next week during recess.”

“Watch the floor carefully this week,” the lawmaker added. 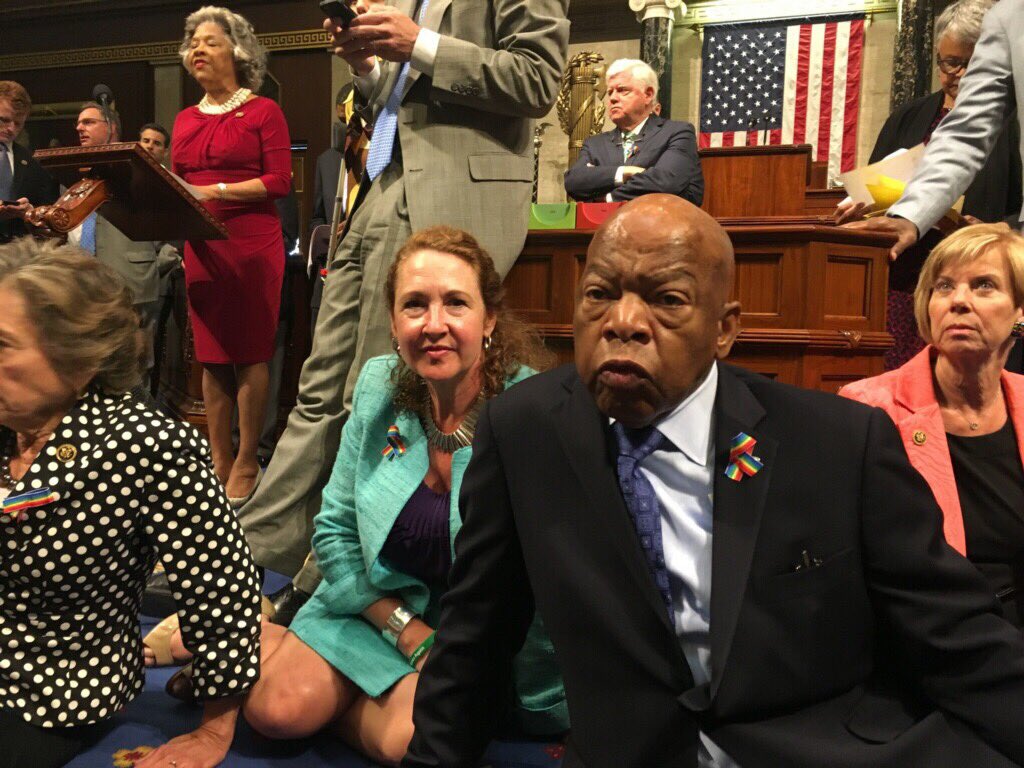 Posted by btx3 on June 22, 2016 in Giant Negros, Occupy America, The Post-Racial Life

You Can Run…But You Can’t Hide, Rand Paul!

So you want to be a US Senator? Welcome to the real world, Mr. Paul. And no – you don’t get a pass on thinly veiled racism…

Except on Faux News.

Rand Paul Cancels On ‘Meet The Press,’ Only 3rd Guest To Do So In 62 Years

A spokesperson for the Tea Party-endorsed candidate informed NBC News late Friday afternoon that an exhausted Paul was canceling his interview on Sunday’s “Meet the Press,” Betsy Fischer, the executive producer for the program, told the Huffington Post.

“We booked him on Wednesday. Everything was set and then his press person emailed this afternoon that he was very sorry but he wants to cancel the interview. We tried appealing to the press person to not much avail,” Fischer said…

If Paul were to follow through on his decision to not appear on “Meet the Press” it would be, as Fischer describes it, “a big deal.” There have been only two other guests in the program’s 62-year history to have canceled last minute: Louis Farrakhan and Prince Bandar bin Khaled al-Faisal of Saudi Arabia.