Why exactly does CNN continue to bring on these clowns? It looks like a game of Whack a Mole.

If they can pull this off, it will be the greatest show ever attempted. The seem to be silent about the possibility that the manmade meteorites may come in different colors, leading to the sky being lit up in a Kaleidoscope.

If I can figure it out – I’m going to Tokyo for this.

Japan will attempt to go down in Olympic history by kicking off the 2020 Tokyo Olympic Games with a man-made meteor shower, Quartz reported.

The Japanese research company ALE plans to use satellites to deploy up to 500,000 manufactured shooting stars into orbit during the Olympic opening ceremony. The project is known as Sky Canvas.

The imitation meteors, which ALE refers to as “source particles” or “the ingredients of a shooting star,” will be discharged by satellites and orbit a third of the length around the Earth before entering the atmosphere. Here, they will burn up in a process known as “plasma emission,” according to the startup’s site.

The secret formula for Sky Canvas’ pellets was researched and developed at Japan’s Nihon University which has also experimented with different colors, according to TechTimes. ALE has also considered using the particles to display images or words in the sky.

The synthetic shooting stars will not come cheap. TechTimes reported that each pellet comes at a price tag of around 1 million yen or $8,100. The high cost of the materials hasn’t deterred ALE, which hopes to launch its first test satellite at the end of 2017, according to Qaurtz.

Cost is not the only potential obstacle. Earth’s crowded atmosphere means collisions between Sky Canvas and other orbiting structures could occur. However, ALE has insisted Sky Canvas is safe.

The project claims to utilize a database from the Joint Space Operations Center, or JSpOC, which tracks satellites and space debris. ALE claimed it has used this data to develop “software that calculates the probability of our particles colliding with other objects.”

Sky Canvas can be aborted up to 100 minutes prior to launch if weather or concern over collisions pose a safety threat, according to ALE. As for the satellites, they are projected to eventually enter the atmosphere and burn up, much like the faux meteors, over a period of 25 years.

The high cost and design considerations required to bring Sky Canvas to Japan seem to be worth it for thestartup. The unprecedented display would be visible over a 62-mile radius and be seen by an estimated 30 million people in the Tokyo area.

I am beginning to think Melissa Harris Perry (MHP) is living in an alternate universe. I mean, MSNBC isn’t exactly known for standing behind their people. Indeed the Network’s history as at deserting their staff at the least whiff of controversy is well established… I’ve long suggested they got the wrong bird as their logo. It should have been a chicken.

So why would our girl start a public spat with the cowardly peacock? Definitely a career limiting move. 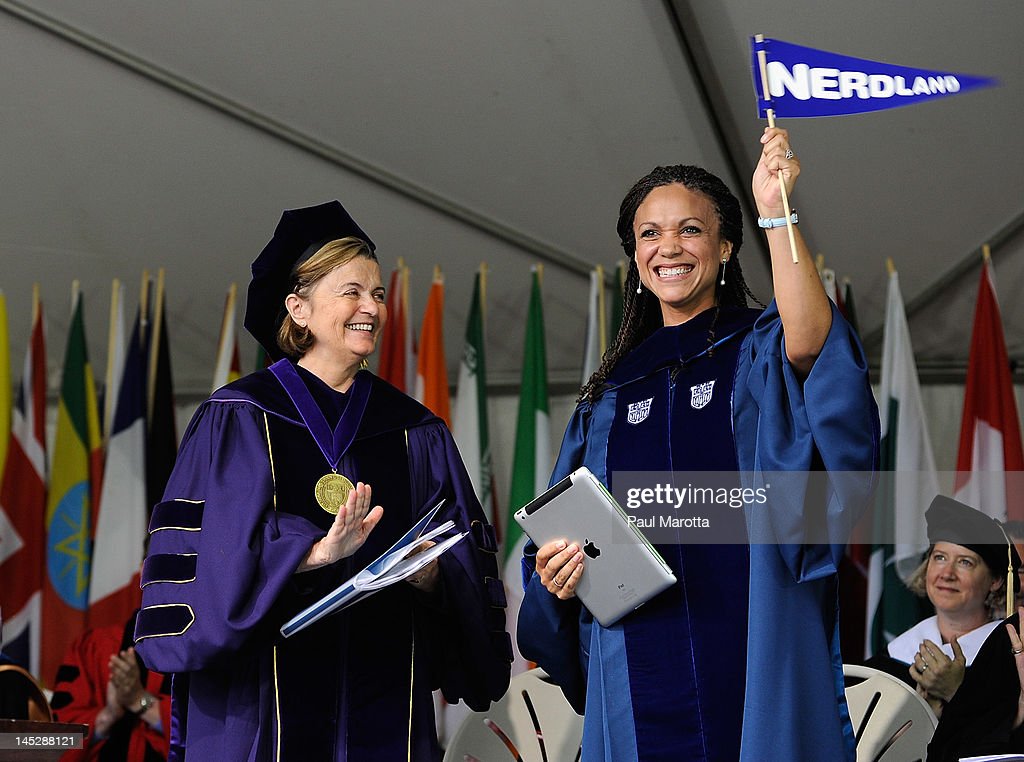 Melissa Harris-Perry is out at MSNBC

Melissa Harris-Perry will not be back on MSNBC.

On Sunday morning, two days after the host’s private fight with management went public, an MSNBC spokesman confirmed that the channel is “parting ways” with her.

Earlier in the morning, Harris-Perry posted a photo on Twitter and said “Farewell #Nerdland,” a nickname for her weekend show, “Melissa Harris-Perry.”

“Inviting diverse new voices to table was a privilege,” she tweeted. “Grateful for years of support and criticism.”

Harris-Perry confirmed to CNNMoney that her representatives are in talks with MSNBC about an exit deal.

Harris-Perry had felt for months like MSNBC was trying to squeeze her off the air and take away her editorial point of view.

On Friday, she spoke out about the treatment, saying she had been “silenced” by MSNBC and placed in a form of cable news purgatory, having been pre-empted for two weekends in a row.

“Our show was taken — without comment or discussion or notice — in the midst of an election season,” she wrote in a letter to staff that was shared with her fans.

MSNBC and its rivals are all trying to squeeze higher ratings out of the chaotic primary season. The channel pre-empted her for campaign coverage with a “Place for Politics” title.

The same thing has happened to other shows, too, MSNBC said in a statement responding to her letter on Friday. The channel called her reaction “surprising, confusing and disappointing.”

But Harris-Perry said the February pre-emptions were merely the most visible manifestation of the channel’s marginalization of her show.

In the letter, she said “no one on the third floor,” where MSNBC’s executives work at 30 Rockefeller Center, “has even returned an email, called me, or initiated or responded to any communication of any kind from me for nearly a month.”

Apparently Stephanie Mills will be playing “Auntie Em” in the 2015 version on NBC.

Toto Is the Only White Cast Member in the First Promo for The Wiz Live!

In what is becoming a yearly tradition, NBC is resurrecting a classic Broadway musical for a star-studded live performance, and this time, it’s The Wiz, the 1975 Tony Award-winner adapted from L. Frank Baum’s novel The Wonderful Wizard of Oz and featuring an all-black cast. (Today, it’s probably most remembered for Sidney Lumet’s movie adaptation, starring Diana Ross as Dorothy and a pre-Off the Wall Michael Jackson as the Scarecrow.) The first promo is here, and while it doesn’t tell us much, it immediately calls to mind the bright, effervescent Oz of the 1939 Judy Garland filmrather than the grittier, ’70s-era New York City seen in the 1978 movie. Also, the part of Toto will apparently be played by an adorable white-haired terrier rather than a black one, making Toto the only white member of the cast.

Could it be that this time around, NBC’s live musical could actually serve as good live theater, rather than something to hate-watch and snark about on Twitter? We shall see—the failed movie adaptation aside, The Wiz is inarguably a stronger, better show than the incredibly dated Peter Pan, and while we initially had other folks in mind, the cast (which also includes newcomer Shanice Williams as Dorothy, David Alan Grier as the Cowardly Lion, Ne-Yo as the Tin Man, and Elijah Kelley as the Scarecrow, plus Queen Latifah, Uzo Aduba, and The Wiz’s original Dorothy, Stephanie Mills) looks pretty great. The live show airs on Dec. 3.

I mean – is there a virus going around that affects right wing talking heads and politicians?

On the politico side –  Michelle Bachmann, then Rick Perry, then the King of Beckistan – Herman Cain.

On the talking head side – Glenn Beck, recently followed by the timely demise of Andrew Brietbart, and now Rush Limbaugh.

One has to wonder when they are going to announce Ann Coulter has Prostate cancer.

Advertisers are rushing to the exits of Rush Limbaugh’s radio show after customers inundated the Internet with outrage over the conservative commentator’s widely criticized “slut” comments about Sandra Fluke.

Online media giant AOL and tax attorney group Tax Resolution Services announced today that they were pulling their commercials from Limbaugh’s program, bringing the total number of companies withdrawing their ads to nine.

“At AOL one of our core values is that we act with integrity,” the company said Monday on its Facebook page. “We have monitored the unfolding events and have determined that Mr. Limbaugh’s comments are not in line with our values.”

Limbaugh dubbed Georgetown University law school student Sandra Fluke a “slut” and a “prostitute” for testifying before a congressional committee that birth control should be covered under employee health insurance plans.

Limbaugh has been widely criticized by many Democrats and women’s rights groups, but the Republican response has been measurably more muted. The GOP presidential candidates have stopped short of all-out condemning Limbaugh’s statements. And the pro-Newt Gingrich Super Pac Winning Our Future is running a national radio ad during Limbaugh show.

The Super Pac’s spokesman Rick Tyler said the group had no intention of pulling its pro-Gingrich ads from Limbaugh’s show.

Gingrich has steered clear of criticizing Limbaugh, instead re-ocusing the issue on President Obama, whom he says “opportunistically” interjected himself into the issue by calling Fluke on Friday.

Lear Capital, a gold and silver investment firm, and LifeLock, an identity theft protection service, are both sticking with Limbaugh. LifeLock posted Saturday on Facebook that Limbaugh’s comments “in no way reflect the opinions of LifeLock” but did not say it was considering pulling their ads.

Lear Capital posted on its Facebook page that the company was “evaluating our advertising relationship” with Limbaugh and was “very concerned” about Limbaugh’s comments, which it said “blurred” the lines between “free speech and unnecessary personal attacks.”

While Limbaugh apologized for his “choice of words” on Friday, some advertisers are still fleeing his show.

All nine former advertisers cited a conflict of values as the reason for dropping their ads.

Usher Attacked BY Woman … For Parking in Handicapped Spot!

Dang! It’s tough out there for a crooner! Usher, more used to them screaming and falling down when he hits those high notes…

Gets a beat-down from a woman for illegal parking on his way to the show!

Obviously this woman isn’t a fan… Or maybe Usher should have taken his shirt off?

USHER ATTACKED BY WOMAN FOR PARKING IN HANDICAPPED SPOT

Usher was planning to engage in an early Halloween celebration but instead of partaking in the festivities in a positive light, the R&B crooner was met with negativity by a woman who attacked him for parking in a handicapped spot in an Atlanta lot.

TMZ reports that the ‘Raymond v. Raymond’ creator arrived to the Little Points Halloween Parade, where he parked his black SUV into a spot that was reserved for those with a handicap. Usher was met by a screaming woman, who grabbed at his shirt and tried several times to swing her arms at him. Bystanders dressed in costume — an Elvis impersonator was among them — helped to prevent the woman from getting close to the singer.

According to the video, the woman is taped screaming and attempting to accost the ‘DJ Got Us Fallin’ in Love’ performer in front of her child. “You don’t belong here!” the woman screams at Usher. Sources tell TMZ that she was eventually lead away from the fracas by her husband.