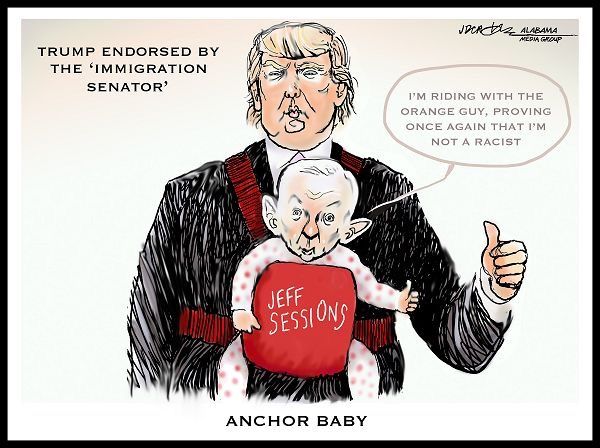 That’s the Spirit! An Airline Terminal Brawl Over Cancelled Flights

The paying public was not happy.

A pie in the face!

Posted by btx3 on September 16, 2016 in Black History, Faux News, The Definition of Racism

The Clown Bus theater gets better every single day!

The bombastic bloviate and presidential candidate in his own mind, announces that John McCain “is not a war hero”.

He may not be the brightest bulb in the pack (he graduated 5th from the bottom of his Naval Academy class) but the guy served as a pilot in Vietnam, and was shot down bombing Hanoi… He certainly is no coward.

The New Obama Model… With a Backbone

If they are wearing that uniform - they deserve a little love and respect from the rest of us.

“We don’t believe in the kind of smallness that says it’s okay for a stage full of political leaders — one of whom could end up being the president of the United States — being silent when an American soldier is booed. We don’t believe in that,” said Obama to loud cheers and a standing ovation.

Obama needs to include this in every speech. The inaction by the 8 people standing on that stage at the Republican Debate is despicable, and shows just how little of their opposition to President Obama, and their morality is based on any legitimate desire for change in policies. The 8 Republican dwarfs are nothing more than a pack of cheap political whores who would sell our service members down the river at a moments notice. Further – the Tea Party isn’t about America…It’s about racism, divisiveness, and hate.

Cory Booker is one of the new generation of black politicians who is going places. And he is doing it the old fashioned way by working – sometimes with shovel in hand – for his constituents.

Notice to other Mayors – “Don’t try this in your city – these are trained Tweeting professionals!”

Hizzoner On the Job!

Cory Booker: The Mayor of Twitter and Superhero of the Blizzard

If you’re a mayor of a northeastern U.S. city, you probably despise Cory Booker right now, because the tweeting mayor of Newark, N.J., is now a social-media superhero, able to move towering snowbanks in a single push — or by sending the shovels and plows your way.

After a blizzard started blanketing the Northeast on Dec. 26, an event that earned the Twitter hashtag #snowpocalypse, Booker turned the microblogging site into a public-service tool. Residents of the city, which has a population of around 280,000, swarmed Booker’s account (@CoryBooker) with requests for help, and the mayor responded. He and his staff have bounced around Newark shoveling streets and sending plows to areas where residents said they were still snowed in. “Just doug [sic] a car out on Springfield Ave and broke the cardinal rule: ‘Lift with your Knees!!’ I think I left part of my back back there,” he reported in one message. One person let Booker know, via Twitter, that the snowy streets were preventing his sister from buying diapers. About an hour later, Booker was at the sister’s door, diapers in hand. END_OF_DOCUMENT_TOKEN_TO_BE_REPLACED

Islamic Services At The Pentagon

American soldiers come in all colors, they can be from anywhere and are a cross section of the peoples from all of the varied places Americans come from…

Inside the Pentagon 9/11 Memorial Chapel, a female Air Force sergeant unlaced her combat boots, set them under the pews and slipped her black veil around her hair and over her camouflaged uniform.

The men pushed back the altar for Christian services to make room for their large green prayer rugs; then they moved the podium from one side of the room to the other so that the congregation would be facing Mecca.

“Allah akhbar,” called out Ali Mohammed, a contractor who works at the Pentagon, raising his hands to his face as he chanted the call to prayer. While politicians and others across the country in an election year debate the propriety of building a Muslim center, including a mosque, two blocks from the former World Trade Center site in New York, there’s no sign of such debate at the Pentagon.

Instead, about 400 worshipers, including Muslims, attend prayer services every week in the chapel, a non-denominational facility built over the rubble left behind when American Airlines Flight 77 slammed into the Pentagon.

Opponents of the New York mosque say it would be disrespectful of those killed on Sept. 11, 2001, to allow Muslims to pray near the World Trade Center site.

That’s never been an issue at the Pentagon, where 125 people who worked there died that day. Muslims have been praying at the Pentagon’s chapel since 2002, gathering every day at 2 p.m. around the time of the second of five prayers Muslims are supposed to offer daily. END_OF_DOCUMENT_TOKEN_TO_BE_REPLACED