Posted by btx3 on September 21, 2015 in Stupid Tea Bagger Tricks

What do you get when you donate $100k to a Rethugly?

Maybe a nice job for you underachieving get.

Why isn’t Scott Walker in an Orange Jumpsuit yet?

Yet he has landed an $81,500-per-year job in Gov. Scott Walker’s administration overseeing environmental and regulatory matters and dozens of employees at the Department of Commerce. Even though Walker says the state is broke and public employees are overpaid, Deschane already has earned a promotion and a 26% pay raise in just two months with the state.

How did Deschane score his plum assignment with the Walker team?

It’s all in the family.

His father is Jerry Deschane, executive vice president and longtime lobbyist for the Madison-basedWisconsin Builders Association, which bet big on Walker during last year’s governor’s race.

The group’s political action committee gave $29,000 to Walker and his running mate, Lt. Gov. Rebecca Kleefisch, last year, making it one of the top five PAC donors to the governor’s successful campaign. Even more impressive, members of the trade group funneled more than $92,000 through its conduit to Walker’s campaign over the past two years.

Hopefully the beginning of ruling the Law unconstitutional.

A Wisconsin judge issued an order Friday temporarily blocking implementation of a law that would severely restrict collective bargaining rights for most public employees in the state.

Dane County Circuit Judge Maryann Sumi issued a restraining order that stops publication of the law signed last week by Wisconsin Gov. Scott Governor Walker (R). Halting that procedural step has the effect of blocking the law, which would go into effect once it is formally published.

The judge’s ruling does not speak to the legal merits of the law but says that the lawsuit over the session has to be completed before the law is allowed to move forward.

Phil Neuenfeldt, president of the Wisconsin State AFL-CIO, praised the judge’s action.“Judge Sumi confirmed today what we knew all along — that the bill stripping hundreds of thousands of hardworking Wisconsinites of their voice on the job was rammed through illegally in the dark of the night,” Neuenfeldt said.

In a statement, governor’s spokesman Cullen Werwie said: “The legislation is still working through the legal process. We are confident the provisions of the budget repair bill will become law in the near future.” 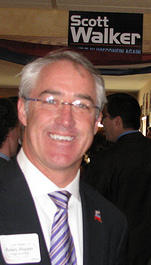 Hat Tip to Roderick for being first off the blocks with this one!

What happens when the guy who bought Scott Walker calls? Walker infamously refuses to answer the calls of any of the Democrats in the Wisconsin Senate…

So why exactly is he answering Koch?

Now it is pretty obvious who Walker reports to, and that the effort to smash unions has been bought and paid for by the Koch brothers.

It really is all about Dirty Money – and Walker is a Koch whore.

Corruption in the United States has reached epidemic proportions. Whether it is Republican Judges in Pennsylvania taking kickbacks to lock up kids in private prisons on minor offenses, or corrupt Supreme Court Judges like Scalia and Thomas taking money, and getting their marching orders from the Koch brothers…

They bought a Governor.

Wisconsin Republican Governor Scott Walker, whose bill to kill collective bargaining rightsfor public-sector unions has caused an uproar among state employees, might not be where he is today without the Koch brothers. Charles and David Koch are conservative titans of industry who have infamously used their vast wealth toundermine President Obama and fight legislation they detest, such as the cap-and-trade climate bill, the health care reform act, and the economic stimulus package. For years, the billionaires have made extensive political donations to Republican candidates across the country and have provided millions of dollars to astroturf right-wing organizations. Koch Industries’ political action committee has doled out more than $2.6 million to candidates. And one prominent beneficiary of the Koch brothers’ largess is Scott Walker. END_OF_DOCUMENT_TOKEN_TO_BE_REPLACED