Some odd “justice” there in Louisiana in terms of the relwase of the accused and the charges against him. Oddly, I know the sheriff of Jefferson Parish, Newell Normand. He is a bit on the excitable side, but is a good Cop who will dig for the facts relentlessly.

However I do think the murderer, Ronald Gasser is getting off lightly with a manslaughter charge, instead of murder – especially with his past history of violence.I am hoping the District Attorney for the Parish pursues a First Degree Murder charge.

The man who fatally shot ex-NFL player Joe McKnight has been arrested and jailed on a charge of manslaughter.

Gasser shot McKnight three times from inside his car while McKnight stood outside and then gave his handgun to deputies when they arrived at the scene soon afterward, Normand said. Authorities said no weapon was found on or near McKnight’s body.

In an interview with CBS News correspondent Jericka Duncan, members of McKnight’s family said that they were not upset by the fact that Gasser was not immediately charged, but by the fact that that their loved one will never come home again

Johanna and Jonathan McKnight want justice for their brother, and said they are willing to wait.

“We don’t want anything to be rushed to judgment. We just want it to be taken care of the right way,” Johanna McKnight said.

A report issued by the sheriff’s office said he was involved in a previous incident at the same intersection in February 2006. Gasser got into a “verbal altercation” with another driver, then followed the driver into a service station and “began to strike him with a closed fist,” according to the sheriff’s office. A charge of simple battery was later dismissed.

“What would you say to a community that’s outraged?” Duncan asked Johanna and Jonathan McKnight.

“I would tell them like I tell people here. You can be outraged but you can do it within yourself,” Johanna McKnight said. “Just do it in a peaceful manner because that’s not what my brother stood for, that’s not what we stand for.”

McKnight played three seasons for the New York Jets and one with the Kansas City Chiefs.

The Jets held a moment of silence Monday night before their game against the Indianapolis Colts at MetLife Stadium to honor the former running back.

McKnight was rated the nation’s No. 1 running back recruit when he came out of Louisiana in 2006 and signed with the University of Southern California. He was a fourth-round draft pick of the Jets in 2010 and played three seasons for New York. He spent a season with Kansas City, and most recently played for the Saskatchewan Roughriders of the Canadian Football League.

McKnight had a 107-yard kickoff return for a touchdown in 2011, and it remains the longest play in Jets history.

Posted by btx3 on December 6, 2016 in BlackLivesMatter

I haven’t carried my guns in a long time…I do now. First Trumpazoid who crosses me with some off the wall shit…Is a dead man.

A man who shot and killed a former NFL player during an apparent road rage incident has been released without charges.

Joe McKnight, a former New Orleans high school star, was shot dead about 3 p.m. Thursday during an argument at an intersection in Terrytown, reported The Times-Picayune.

A witness said she saw a man, later identified as 54-year-old Ronald Gasser, yelling at the 28-year-old McKnight, who was attempting to apologize.

Witnesses said Gasser, who is white, pulled McKnight, who is black, from his Audi, argued with him and then shot him more than once as he stood over him.

“I told you not to f*ck with me,” Gasser said, before firing once more at McKnight as he lay on the ground.

McKnight, who last played in the NFL in 2014, was pronounced dead at the scene.

Gasser was taken to the Jefferson Parish Sheriff’s Office for questioning but was released overnight without charges, reported The Advocate.

Investigators said McKnight, who was named the Times-Picayune’s male athlete of the decade in 2009 after a standout career at John Curtis Christian School, was not armed at the time of his death.

No other guns were found outside his vehicle.

Witnesses said Gasser and McKnight had exchanged words before the confrontation at the intersection of Behrman Highway and Holmes Boulevard.

Cardell Hayes, who fatally shot NFL player Will Smith earlier in April in another New Orleans road rage case, is expected to claim self-defense under that statute, which was passed in 2005.

Posted by btx3 on December 2, 2016 in Domestic terrorism, The Definition of Racism, The New Jim Crow

Why the gun culture is a bad thing. Former DE Will Smith and his wife shot after being rear ended in an auto accident… 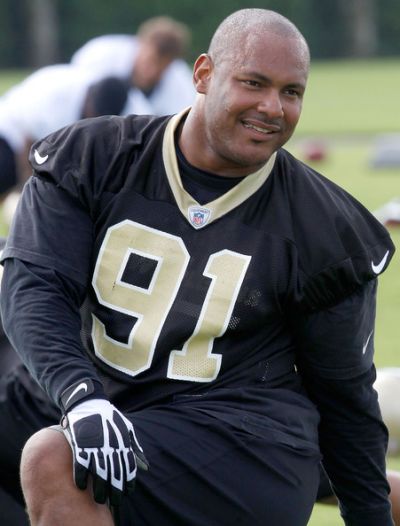 Smith, 34, was shot after exchanging words with the driver of a Hummer H2 that rear-ended his Mercedes G63 SUV, causing him to strike another vehicle, police said.

Smith was shot multiple times, and his wife, Racquel, also 34, was shot twice in the right leg, according to police. Smith was pronounced dead at the scene, while his wife was taken to a hospital.

“On behalf of the Smith family, we are thankful for the outpouring of support and prayers. We ask that you continue to respect the family’s privacy as they grieve the loss of a devoted husband, father and friend.”

Police said the driver of the Hummer, Cardell Hayes, 28, has been charged with second-degree murder and that the handgun used in the shooting had been recovered.

Former Saints running back Pierre Thomas was on the scene shortly after the incident and reportedly had been out with Smith and his wife.

Smith was drafted by the Saints with the 18th overall pick in 2004 out of Ohio State. He spent all nine of his seasons with the Saints and last played in 2012. He was a Pro Bowler in 2006 and ranks fourth in Saints history with 67.5 career sacks. He had a career-high 13 during the Saints’ 2009 Super Bowl season.

Some years ago when I used to regularly target shoot at a range, I noticed over a period of several months that they had 10-15 used pistols made by a popular manufacturer in the cabinet for sale. The pistols were a compact “carry” model identical to that carried by some police departments, just about 1//2 the size.  when you see a large number of most any product in the “Return bin” it usually means there is a defect or quality problem.

Asked the friendly salesman about that seeming discrepancy, as the manufacturer had a good reputation for producing quality product. Seems that the safety on both the bigger an smaller model were in the same place. Which, it turns out was fine when the gun was carried in a holster like that used by the military or police. When the smaller “carry” model was tucked under the belt though, it seems that the safety was exactly in the wrong place and would flip to the fire position when puled out of a trouser waistband. The result was a fairly prolific series of what I euphemistically all “Hillbilly Vasectomies”  as a result of self emasculation by gun. .. This one kind of makes you wonder …

Man shoots self in road-rage incident on I-4

Where an Interstate-4 motorist shot himself in a road-rage incident today remained in question for hours as police and sheriff’s deputies tried to determine who should investigate.

Orlando police first treated the shooting as their case about 11:30 a.m. when the man pulled off the highway and stopped his white BMW sedan at the Princeton Street exit near College Parkand Florida Hospital, records show.

Within an hour, police turned the case over to the Seminole County Sheriff’s Office believing the shooting happened there.

But the investigation was turned over again about 1:15 p.m. to the Orange County Sheriff’s Office in the belief the shooting happened south of the Seminole Countyline.

The confusion apparently stemmed from Richard Coles, the wounded motorist who was undergoing treatment for his injury, according to the sheriff’s office.

“He was taken to local hospital where he has declined to prosecute and no longer wishes to speak with investigators,” sheriff’s spokesman Jeff Williamson wrote.

Details remain few but Coles, 36, told Orlando police he had been driving toward Orlando when another motorist brandished a gun over an undisclosed incident, according to police.

Feeling threatened, the man grabbed his own gun and it fired. The bullet struck one of the man’s legs causing a non-life threatening wound, said Orlando police Sgt. Jim Young.

Police officers and sheriff’s deputies have not located witnesses to what precipitated the shooting, according to the sheriff’s office.

Sometimes, there is justice in the world…

Drivers Shoot Each Other Dead in Road Rage Spat

“In follow up to yesterday’s shooting, the two deceased men are James Pullum, 43, and Robert Taylor, 56, both of Ionia,” according to the Ionia Department of Public Safety Facebook page Thursday morning.

The men were pronounced dead at Sparrow Ionia Hospital later in the evening.

The incident happened just before 7 p.m. in the parking lot of the Wood’s Wonder Wand car wash, 426 S. Steele St. The men apparently got out of their vehicles and began arguing. Both men eventually took out their guns and opened fire.

Witnesses said they heard about seven or eight gunshots.

“I think it’s crazy that a small town has to have two people die,” witness Allen Daggett, who arrived at the scene just as first responders did, said Wednesday night. “I feel sorry for the people that died. I feel sorry for the families and everyone’s [who is] acquainted with them,” he said.

Daggett told 24 Hour News 8 he saw a good Samaritan from a nearby business run to the scene to try to help. He said the man had to kick guns out of the way to begin CPR on the drivers.

“I watch [the first responders] pick one guy up and take him to the hospital,” said Daggett. “[They] did CPR on the guy for 45 minutes and the guy I doubt was alive at the time.”

At least one handgun remained in between the vehicles late Wednesday night as police investigated.

Another witness, who was at the Family Video across the street from the shooting, told 24 Hour News 8 she heard a sound like firecrackers and then screaming. She said emergency crews, including two ambulances, arrived a short time later.

A Michigan State Police mobile crime lab arrived around 11 p.m. at the scene, which was still very active.

Posted by btx3 on September 19, 2013 in Domestic terrorism