Seems that even the die-hards are recognizing the very large writing on the wall…Even the Chumph realizes his stupidity.

Now that even Republicans are beginning to realize that gutting healthcare “means you too, stupid” support is dropping like a rock. Donald Trump, Republicans are ready to give up on Obamacare repeal

Inside Congress and the White House, Republicans are beginning to admit that they’re not likely to be able to pass even a pared-down repeal of the Affordable Care Act, despite months of trying. The conclusion is one that many Republicans in Washington have long privately realized but not publicly discussed much.

As the prospects for the Senate GOP’s Better Care Reconciliation Act have continued to worsen, however, Republicans are openly discussing the idea that they may never be able to agree on a repeal of Obamcare. And it’s an idea that even President Donald Trump is considering.

Trump seemed to play good cop in a Monday morning tweet urging the congressional GOP to do something — anything, really — about health care.

Trump’s statement comes after Congressional leaders had all but given up on the idea that the Affordable Care Act would be repealed and replaced — or even just repealed.

“Clearly, the draft plan is dead,”Sen. Bill Cassidy, R-La, said on “Fox News Sunday.” “Is the serious rewrite plan dead? I don’t know.” He added, “we don’t know what the plan is” in terms of what comes next for the Senate Republicans.

Cassidy’s morbid terminology was echoed by Arizona Sen. John McCain as he pronounced the bill’s prospects terminal during an interview with CBS’s “Face the Nation.”

“I think my view is it’s probably going to be dead,” McCain said.

The Trump White House also appears to be coming to this realization as well. During a Sunday interview with ABC’s “This Week,” Treasury Secretary Steve Mnuchin explicitly stated that the administration is getting ready to focus attention on something else.

“If we don’t get this passed then the president as he said will go to the next plan,” he told host George Stephanopoulos.

Mnuchin even appeared to endorse a proposed modification to the bill sponsored by Texas Republican Sen. Ted Cruz that would allow insurance companies to offer plans for sale that are not compliant with Affordable Care Act regulations, provided they also offer at least one plan that is.

“I’m very hopeful that his plan and his changes will get supported. And I think we’d like to get health care done,” Mnuchin said.

Cruz’s idea has come under criticism from more moderate Republicans because they believe it will lead to many companies pricing out older and sicker customers.

Should Republicans decide to punt on health care or work with Democrats (as Senate Majority Leader Mitch McConnell has been repeatedly threatening his caucus), it may not matter much with their core base of voters.

In a poll released last month by the Kaiser Family Foundation, just 8 percent of self-identified Republicans said that repealing Obamacare should be elected officials’ top priority. Support for the GOP health care bill had fallen to just 55 percent among Republicans in the survey.

It is very hard for a government to take away a “right” already granted.

When you look at Revolutions in Third World countries, you find some common themes. The Governments of those dictatorships or quasi-dictatorships are controlled by a group representing the interests of a small minority of the population, typically the wealthy. The Government uses increasingly Draconian measures to force the population’s compliance. Here in America, Republicans are doing just that. Examples of those measures to suppress dissent include laws in several state which allow Chumph supporters to run down and murder protesters, and an attempt by Republicans in some states (including DC, which the Republican majority House now controls) to criminalize dissent though the abuse of felony laws to punish protesters for nonviolent protest.

When you start locking up your detractors in prisons…you have paved the way for violent revolution. When facing a felony conviction or death for waiving a sign on the public streets – there is very little difference in the punishment for blowing up buildings. The white-wing Republican government in America isn’t far from that line.

The Trump(don’t)care legislation is another example of abuse of the majority for the benefit of the rich. A lot of those folks who will be getting abused voted Republican. While the Second Amendment whackos are too consumed by racism to care…There are a lot of poor Republican Soccer Moms and caretakers of the sick and elderly out there who do.

Democrats have one chance to get this right. They need to do smething to stop this steamroller besides pretty speches.

And because it is the 4th Federal Appeals Court the ruling also sets legal precedent for North Carolina. 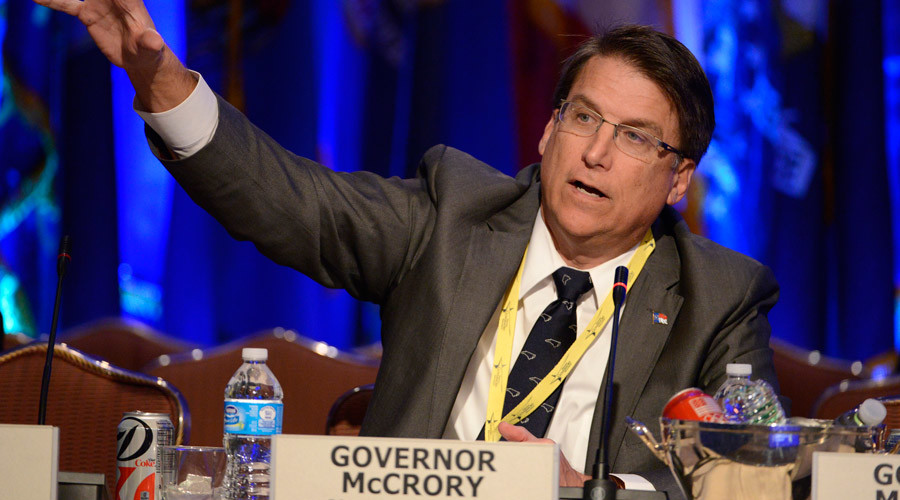 A federal appeals court has overturned a policy barring a transgender student from using the boys’ restrooms at his Virginia high school.

The appeals court’s ruling establishes legal precedent in the five states in the 4th Circuit, including North Carolina, which faces a lawsuit challenging a new state law requiring transgender public school students to use the bathroom that corresponds to the sex on their birth certificate.

“I feel so relieved and vindicated by the court’s ruling,” Grimm said in a statement released by the American Civil Liberties Union, which represents him. “Today’s decision gives me hope that my fight will help other kids avoid discriminatory treatment at school.”

Grimm was born female but identifies as male. After complaints, the school board adopted a policy requiring students to use public restrooms corresponding with their biological gender.

Grimm, 16, said he started refusing to wear girls’ clothes by age 6 and told his parents he was transgender in April 2014.

Grimm’s parents helped him legally change his name and a psychologist diagnosed him with gender dysphoria, characterized by stress stemming from conflict between one’s gender identity and assigned sex at birth. Grimm began hormone treatment to deepen his voice and give him a more masculine appearance.

School officials told CBS affiliate WTVR they received complaints from dozens of parents in regards to the bathroom issue.

“It shall be the practice of the (Gloucester County Public Schools) to provide male and female restroom and locker room facilities in its schools, and the use of said facilities shall be limited to the corresponding biological genders, and students with gender identity issues shall be provided an alternative private facility,” the school board said in its ruling on the issue.

At that time, the school also built several unisex private restrooms for all students to use.

Grimm said for him, this battle is about much more than just using a certain restroom.

“I’m banned from a gender specific place and it is a big issue for me, this is one way the school is saying, we do not believe you are legitimate, and that is a big deal to me,” he said.

The case of Grimm has been especially closely watched since North Carolina enacted a law last month that bans transgender people from using public restrooms that correspond to their gender identity. That law also bans cities from passing anti-discrimination ordinances, a response to an ordinance recently passed in Charlotte.

In the Virginia case, a three-judge panel of the 4th U.S. Circuit Court of Appeals — which also covers North Carolina — ruled 2-1 to overturn the Gloucester County School Board’s policy, saying it violated Title IX, the federal law that prohibits discrimination in schools. A federal judge had previously rejected Grimm’s sex discrimination claim, but the court said that judge ignored a U.S. Department of Education regulation that transgender students in public schools must be allowed to use the restroom that corresponds with their gender identity.

“We agree that it has indeed been commonplace and widely accepted to separate public restrooms, locker rooms, and shower facilities on the basis of sex,” the court wrote in its opinion. “It is not apparent to us, however, that the truth of these propositions undermines the conclusion we reach regarding the level of deference due to the department’s interpretation of its own regulations.”

Maxine Eichner, a University of North Carolina law professor who is an expert on sexual orientation and the law, said the ruling — the first of its kind by a federal appeals court — means the provision of North Carolina’s law pertaining to restroom use by transgender students in schools that receive federal funds also is invalid.

“The effects of this decision on North Carolina are clear,” she said, adding that a judge in that state will have no choice but to apply the appeals court’s ruling.

Other states in the 4th Circuit are Maryland, West Virginia and South Carolina. While those states are directly affected by the appeals court’s ruling, Eichner said the impact will be broader.

“It is a long and well-considered opinion that sets out the issues,” she said. “It will be influential in other circuits.”