Right Hook Nazi of the Day

Not sure what was on this cretins mind, but he decided to march through anti-racist protesters at University of Florida in a shirt festooned with Nazi swastikas.

Have you seen anyone since the 70’s wear mutton chops like that?

Fortunately there were no serious injuries, and the Florida Police kept things well in hand. 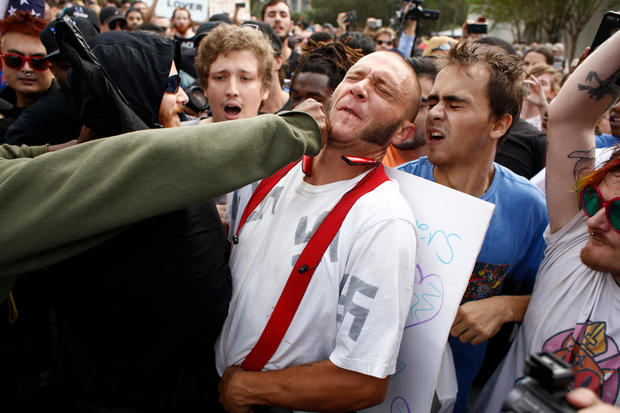 Looks like Don Lemon is getting a bit tired f the bullshit. The reason conservatives don’t want to attract black NFL players is simply racism. They like the Chumph’s whites only Party.

Steve Schmidt, Republican strategist for a number of Republicans, including the Hoh McCain Presidential campaign lets loose on the Chumph bigot!

To Yellowbelly Republicans, and Yellowback Democrats, here is a reminder –

He who passively accepts evil is as much involved in it as he who helps to perpetrate it. He who accepts evil without protesting against it is really cooperating with it. Martin Luther King, Jr.

Young and Stupid at Howard University

Like in any movement, or any group you have some folks a few tons short of a full payload.

Racial politics shouldn’t even be entering into this discussion – much less politics based on loudmouth ignorance.

The former FBI Head may not be your best friend, but unlike the current asshat in charge of the DOJ – he isn’t your enemy.

Comey at least is trying to add value. The loudmouth protesters here provide no value whatsoever – and need to be sent back to their grandmas to learn some manners. And their daddies if he can be found to teach them some common fucking sense.

This old white guy may have some important things to teach you.

“We shall not be moved!” the protesters yelled, fists raised in the air. They also chanted, “No justice, no peace,” and told Comey to “get out” of their “home.”

“I’m only going to speak for 12 minutes,” Comey said in response to the demonstrators.

Comey, who was appointed FBI director by President Obama in 2013 to lead the FBI, was fired by President Trump in May. His dismissal provoked the appointment of Robert Mueller, himself a former FBI director, as the special counsel tasked with investigating Russian interference in the 2016 election.

Howard University named Comey an endowed chair in public policy last month, with his $100,000 salary going to provide scholarships to the school. “I look forward to contributing to this remarkable institution and engaging students and faculty alike,” Comey said in a statement upon his hiring.

However, some students were clearly upset Wednesday by the school’s decision to bring Comey aboard. “You sold out to the FBI!” some yelled at administrators during the speech.

Posted by btx3 on September 22, 2017 in BlackLivesMatter, The Definition of Racism

Posted by btx3 on August 9, 2017 in Second American Revolution, The Definition of Racism, The New Jim Crow

Visiting Poland before the G20 Meeting in Germany, the Chumph got a clue as to how little respect Europeans have for him,

After abrogating leadership in the free world and deciding unilaterally to ignore our Treaty Agreements – the Chumph is in for a rough time at in Merkel’s Germany.

He is stupid enough to believe his pal and master Putin will save him.

They have a word in Russian for that…Nyet.

I guess they couldn’t afford a cross with wood prices being what they are. 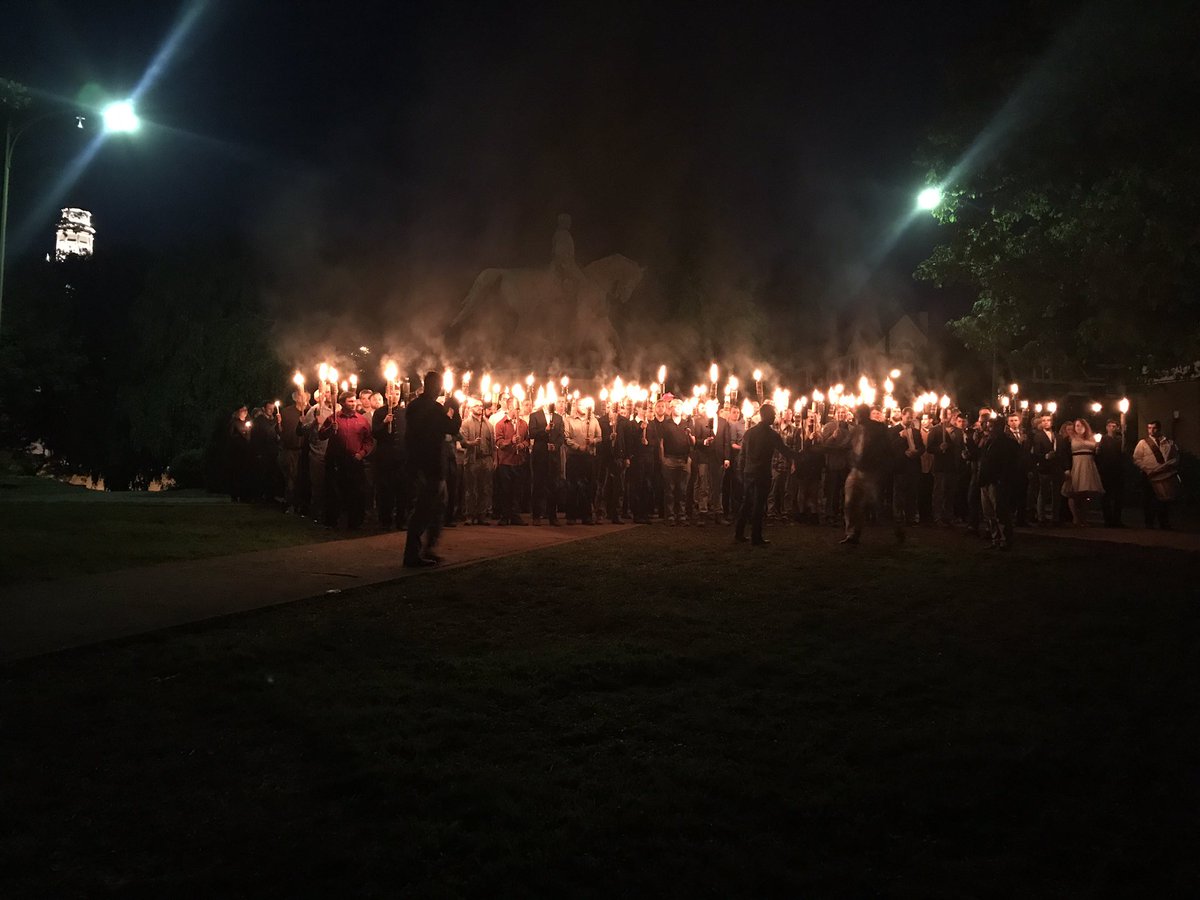 Klavern in the Park…

Several dozen protesters gathered in Charlottesville, Virginia, on Saturday to express support for a Robert E. Lee statue that is set to be removed. The group made its point by lighting torchers and chanting Nazi rhetoric as well as “Russia is our friend.” Richard Spencer, the self-proclaimed white nationalist, was at the protest and also led an earlier rally against the removal of the statue that has become a centerpiece of Corey Stewart’s campaign in his bid to be elected Virginia governor this year. “What brings us together is that we are white, we are a people, we will not be replaced,” Spencer said at the first rally.

Some protesters at the afternoon Jackson Park rally spoke to the press and denied they were white supremacists. “We are simply just white people that love our heritage, our culture, our European identity,” one protester said.

Later that night, dozens gathered in Lee Park and surrounded a statue of the Confederate general that the City Council has voted to remove and replace with a new memorial dedicated to slaves. The protesters chanted, “You will not replace us” and “Blood and soil.” Yes, they were chanting a phrase that was popularized in Nazi Germany.

The protest didn’t last long as the white supremacists extinguished their torches when police surrounded the park. But they had made their point. “This event involving torches at night in Lee Park was either profoundly ignorant or was designed to instill fear in our minority populations in a way that hearkens back to the days of the KKK,” Charlottesville Mayor Mike Signer said in a statement.

There was no sign that Stewart, who is taking part in the June 13 GOP primary, was in any way involved in the protest, which was condemned by several of the other candidates for governor. A group that is suing to keep the statue in place denied any involvement in the protest Saturday night. “We remain committed to preserving the Robert E. Lee Monument in its park through the legal process in the courts because of its historic and artistic value,” the group said in a Facebook post. “We soundly and completely reject racism, white supremacy, and any other identity based groups that preach division and hate no matter which side of the issue they happen to support.”