One of my favorite memories as a young boy was when visiting country relatives who lived along one of Virginia’s rivers emptying into the Chesapeake Bay. In the summer, we’d go fishing a few miles down river for the plentiful Sea Trout, Spot, Croaker, and Bluefish. And yes, “Croaker” is a type pf fish prevalent along the mid-Atlantic seaboard considered a delicacy by some, and a trash fish by others because it has lots of bones.

Atlantic Croaker. So named because it makes a sound when caught. They breed in a 6 year cycle, and disappear for a year. Depending on year, they can range from 3-4″ to over 18″ in length.

In the fall Hunting season, the men in the Hunt Club would sometimes go out to the Oyster Grounds along the river, and collect bushels of the delicious bivalves. We would usually all ride on one of the flatbed Lumber Trucks, and wade out at low tide to chip Oysters off what is called Oyster rock, filling bushel baskets. Then on the way back home, “shuck” a few to eat raw, flavoring them with Vinegar, splitting up the catch so everyone had some to take home.

The bay (and ocean side) has made a big comeback from the devastation of the Oyster stock by over-fishing and pollution. And a number of small aquaculture companies have had success in farming Oysters and Clams for the commercial market. I started “planting” my own clams, and raising Oysters in baskets which are designed to float, suspending the Oysters in a cage under water.

While people both farm clams and use the floats for Oysters for commercial purposes, many people here who live along the water, or have access to a dock will raise Oysters or Clams for their own personal consumption. Originally the floats were designed to raise the Oysters above the bottom to avoid the deadly MX Virus, as well as pollution. Now, they are the basis of a sustainable aquaculture system. 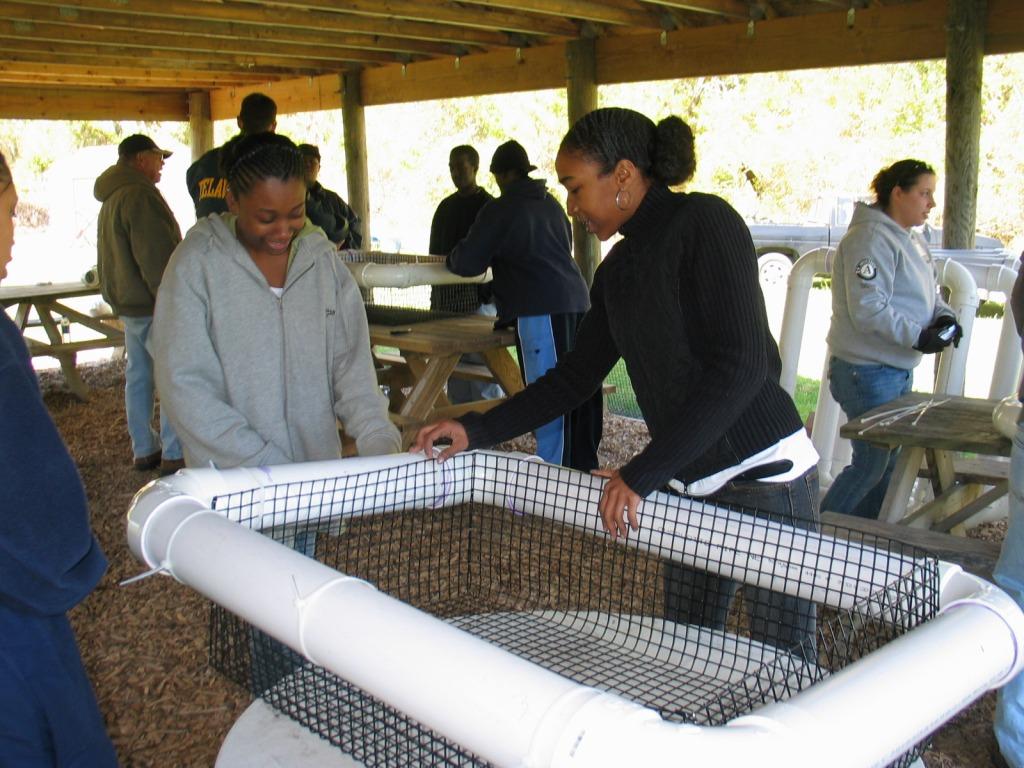 Now, Putin’s Bitch wants to take us back to the “bad old days” by destroying the very Chesapeake Bay clean up efforts which allowed the Oyster and Clam businesses on the bay to come back. POS needs to keep his freaking small paws off the Bay!

This is why the Farmers in my part of the world…

Ryan Coxton resurrected his family’s oyster business in 2001 from the same muddy swath of Virginia river bottom his great-grandfather leased 102 years earlier. The slippery, jagged-shelled bivalves became so popular in the decades after the Civil War that a gold rush ensued in the Chesapeake Bay and its teeming estuaries, at times spurring violent rivalries that became known as “the oyster wars.”

But the Rappahannock Oyster Co. ― the first iteration of it, at least ― died in 1991 with Coxton’s grandfather. By the time Coxton and his paternal cousin, Travis, started growing oysters as a hobby on the family’s old property, the oyster industry in the region had all but collapsed.

Overfishing over the last century badly hurt wild oyster populations. Diseases ravaged the remaining creatures in the 1950s. Runoff pollution from farms and sewage treatment plants tainted the waters with phosphorus and nitrogen. Bacteria and algae fed by the pollution blossomed into massive, toxic plumes that sucked up oxygen and blocked sunlight, stymying fish populations and thinning the marsh grasses that oysters cling to to keep from slipping into the soft, silty mud and dying.

Things started changing in the last several years as the effects of an Environmental Protection Agency cleanup that began in 1983 under President Ronald Reagan took effect. (President Barack Obama imposed even stricter targets in 2009). Levels of phosphorus and nitrogen, a third of which settled on the water from being wheezed by power plants into the air, fell. The water cleared. Grasses grew back in dense thickets, tightening the river bed with roots.

By 2004, Coxton quit his day job and started cultivating oysters full time. At first, restaurants in the area, knowing how dirty the water had been, wouldn’t buy his product, even though it was safe to eat. He shipped them to upscale eateries in New York. But as water quality improved over the past decade, local demand came roaring back. Coxton opened his fifth restaurant Thursday evening and plans to cut the ribbon on a sixth in September.

Now the program that saved the Chesapeake Bay oyster industry is in jeopardy. The budget President Donald Trump proposed Thursday would eliminate funding for the $73 million initiative, along with more than 50 other programs and 31 percent of the EPA’s overall budget. Funding isn’t the only thing on the chopping block. Trump vowed to boost economic growth by axing regulations, particularly environmental rules he blames for holding businesses back. Already, his administration has scrapped a rule protecting streams from coal mine pollution, tossed out a directive ordering oil and gas drillers to report methane emissions and overturned a regulation giving the EPA power to police fertilizer and manure runoff from farms, the chief contaminants in the Chesapeake Bay.

“Oysters are filter feeders,” Coxton, 47, told The Huffington Post in a recent interview. “We can’t operate without clean water and a good environment.”

It wasn’t long ago that another Republican eager to placate his party’s populist wing took aim at cleanup efforts pursued by his Democratic predecessor. Weeks after taking office in January 2015, Maryland Gov. Larry Hogan blocked regulations aimed at limiting Eastern Shore poultry farmers’ use of chicken manure on their fields. The phosphorus-rich fertilizer is a leading source of runoff in the Chesapeake Bay.

A month later, the Hogan administration received a letter from the EPA warning that, if the state dropped new manure rules, it would need another policy to meet the agency’s pollution limits. Maryland Democrats scrambled to pass bills that would have done just that. In response, Hogan made an about-face. He ordered an immediate ban that targeted fields oversaturated with manure, even though he gave other farmers more time to comply, local NPR station WYPR reported.

“We have listened to the agricultural and environmental communities to find a fair and balanced plan for limiting phosphorus,” Hogan said in a statement at the time. “The enhanced Phosphorus Management Tool regulations … will protect water quality in the Chesapeake Bay while still supporting a vibrant agriculture industry in Maryland.”

In a statement to The Huffington Post, the governor vowed he would “always fight to protect our state’s most important natural asset.”

“If any of these budget proposals ever become law, we will take a serious look at how to address them during our budget process next year,” Amelia Chasse, the governor’s spokeswoman, said. “Since taking office, Governor Hogan has invested more than $3 billion in efforts to protect and restore the Chesapeake Bay and will remain a fierce advocate going forward.”

Conservationists, clean water advocates and oyster farmers hope Trump will have a similar change of heart. Or, at least, that Congress will withhold approval for any budget that doesn’t include funding for the project. Republican lawmakers, some of whom already joined Democrats in opposing Trump’s cuts to a similar cleanup effort in the Great Lakes, are expected to oppose the reductions.

“This just makes no sense. We are in disbelief,” said William C. Baker, president of the nonprofit Chesapeake Bay Foundation. “The EPA’s role in this cleanup is nothing less than fundamental. It’s not just important; it is critical.”

Oyster farmers emerged over the past decade as a force in Virginia and Maryland. In the Old Dominion State, farmers sold $16 million in oysters in 2015 alone, besting all other states on the East Coast, according to the Virginia Institute of Marine Science’s 10th annual report on the state’s aquaculture industry. Though smaller in Maryland, the industry has ballooned in the last eight years, said Jeffrey Brainard, a spokesman for the EPA-funded Maryland Sea Grant, which is also earmarked for disposal.

“We’re literally an engine of job growth, especially in Chesapeake and especially for the watermen of that region who are up for the challenge,” Rheault said. “These proposed cuts are just job killers.”

Uncertainty over the future of the EPA cleanup program has spooked some who left other jobs in recent years to join the booming industry. Johnny Shockley, 54, quit commercial fishing to build a sustainable oyster hatchery on Hooper’s Island, the bayside archipelago where he grew, a third-generation waterman. Now the man The Washingtonian once called “the Chesapeake Bay’s hope on the half shell” worries his small empire of sustainable oyster hatcheries could be imperiled.

“One of the reasons why folks were getting in and willing to change their lives and commit their livelihoods to these efforts is the support we’ve seen from the federal government in the last 25 to 30 years,” Shockley said. “All of a sudden we’ve been threatened to see that all taken away.”