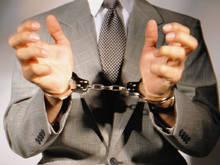 Looks like the anticipated “special justice” for white boys is playing out.

BTx3 things these scumbags each ought to be spending a couple of years in the general population of a Federal Penitentiary getting “acculturated” to the real world. What this means is you get less time for the “organized crime” of breaking into a federal office and tapping the phones…

Than for a gram of crack.

O’Keefe, others plan to plead guilty

The Abercrombie and Fitch Model Orange Jumpsuit for Mr O'Keefe

The four men arrested in January for their stunt to embarrass staffers in the New Orleans office of Sen. Mary Landrieu (D) are prepared to plead guilty, legal sources say, in return for reduced charges. Federal prosecutors today filed misdemeanor charges against the four. James O’Keefe, who became a media sensation last year for his videos involving ACORN employees, and three others were charged with entering federal property under false pretenses. Two of them went to her office pretending to be telephone repairmen. The charges said all four were in on the plan.

Because the charge is a misdemeanor — and not a felony — the maximum sentence is six months in prison and a $5,000 fine.

Federal authorities initially accused the four of trying to tamper with Landrieu’s phones, but the new filing merely says they planned to pretend to test the phone system.

The FBI said O’Keefe, 25, of New Jersey, used his cell phone to try to capture video of two other men who posed as telephone repairmen and asked to see the phones at Landrieu’s office. The fourth allegedly waited outside in a car with a listening device.

The two suspects who posed as repairmen — Basel and Flanagan, both 24 — wore white hard hats, tool belts and fluorescent vests. One of them had a camera hidden in his helmet.

Flanagan, of New Orleans, is the son of the acting U.S. Attorney based in Shreveport. Basel, of Minnesota, and Stan Dai, 24, of the Washington, D.C. area, also were arrested.

The four suspects originally were charged with entering federal property under false pretenses for the purpose of committing a felony, which carries a penalty of up to 10 years in prison and a $250,000 fine.

//
// Your request is being processed…

Posted by btx3 on March 26, 2010 in Stupid Republican Tricks