Here is an ad, by a Veteran who lost a leg in Afghanistan…Which should have been shown on the Super Bowl last night…

HBCU to Buckdance for Trump

Never heard of this school or even seen it on a list of HBCUs, Looked it up and it ranked 72nd out of 77 HBCUs in the country, with an enrollment of 750 students. And has an overall “D+” rating from at least one site. And it isn’t even listed on the US News and World Report list of Colleges and Universities.

It does apparently have a band… 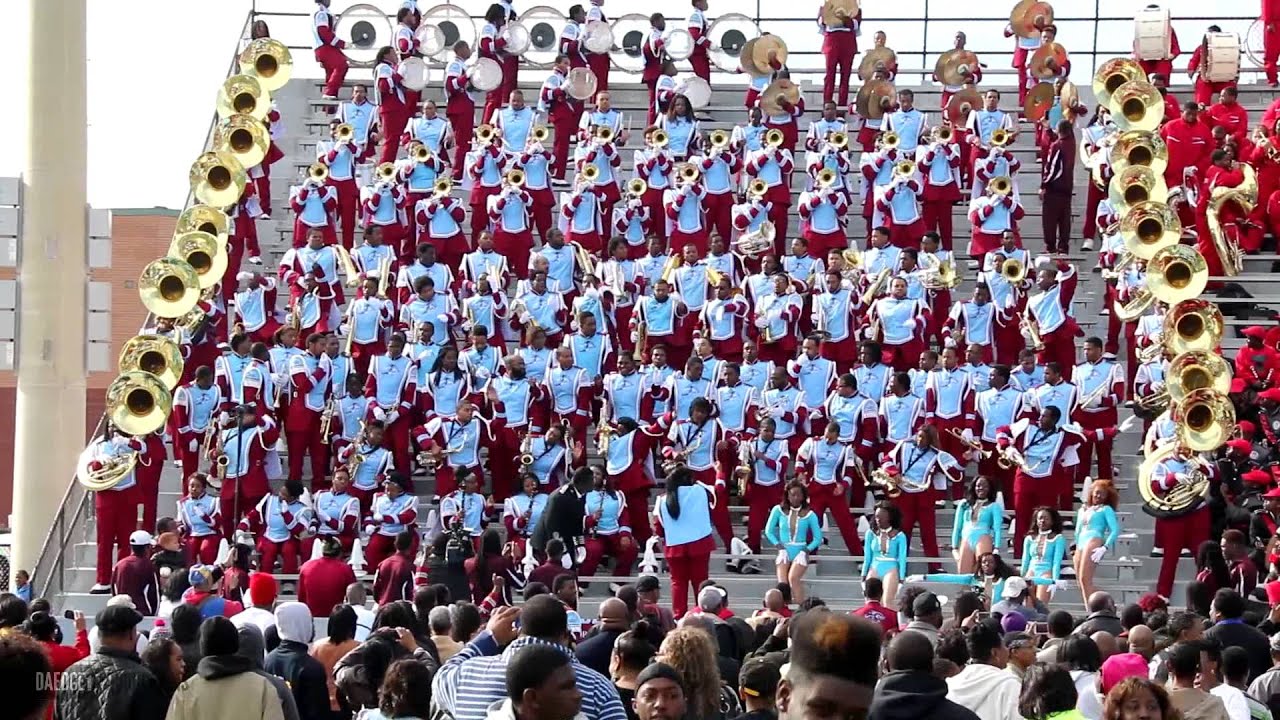 Regardless – I am sure the School President is going to catch hell for this decision.

The school is known by its collection of  Hale Woodruff murials…So it is kind od hard to justify that with providing any support whatsoever to the Chumph.

From the Hale Woodruff “Armistad” Series

The president of a historically black college in Alabama says its band will perform in President-elect Donald Trump’s inaugural parade, despite a barrage of criticism.

Talladega College President Billy Hawkins announced the decision Thursday. It comes after the Presidential Inaugural Committee had announced that the Alabama band had accepted its invitation to march in the Jan. 20 parade.

The announcement followed several days of intense debate on social media. Some people voiced strong opposition, while others said it would be a good opportunity to perform in the parade.

Posted by btx3 on January 5, 2017 in Second American Revolution, The Clown Bus

The cast and founder of the Broadway runaway smash hit “Alexander Hamilton” performed yesterday at the White House, and will be broadcast over free TV for those unable to attend any of the performances on Broadway. This is the hottest ticket on Broadway since “Cats”.

This is Sophina DeJesus who is a member of the UCLA Gymnastics team at a recent performance.

Proving not all rappers are tone deaf insults to stolen music, T-Pain, who made his fame by rapping, performed a  Capella version of Sam Cooke’s “A Change is Gonna Come” at the National Public Radio’s “Tiny Desk Concert” Series about a year ago. He returned to NPR a few weeks ago to perform again, again without the help of Auto-Tune. The fireworks, with his cover of the Cooke classic start about 13:30 in. His new album reportedly will include some cuts featuring his very good singing voice…Instead of just shouting.

If you are unfamiliar with NPR’s Tiny Desk Concerts, look them up. While they occasionally feature mega-artists like Adele, the majority of the artists they present are new, and exploring their respective genres. If you love music, and appreciate exploring different genres, like a certain JazzFan (you know who you are!) who visits here occasionally – I think you will love exploring the more than 100 artists they have presented.

I don’t believe this guy tried this…

The venue where a former Baltimore police officer said he planned to perform an Al Jolson routine in blackface says it won’t host the event.

Bobby Berger announced plans Wednesday to raise money for the six Baltimore officers indicted in the death of a black man who died of injuries he received while in police custody.

Later Wednesday, Michael’s Eighth Avenue in Glen Burnie, where Berger intended to hold the event, said on its website that the fundraiser will not be hosted there.

Berger said 610 tickets had been sold for the Nov. 1 fundraiser at $45 each. The police union said Wednesday it doesn’t support the event and won’t accept money from it.

Berger says he doesn’t believe there is anything racist about his routine.

At least someone in the BPD figured it out beforehand!

Black stereotypes in American Cinema in the 30’s and 40’s..

Parent Gun – Pulling the Trigger on Non-Performing Schools in California

An interesting concept. I can see both sides of this, where something needs to be done – but what may be done may be worse than the old school. Charters are almost universally failures with a few bright exceptions, and consistently under-perform the Public Schools they were supposed to replace. The ability to shake up the school administration, and make the educators accountable (IF the educators are the problem) is a positive step. Unfortunately, most failing schools are also populated by “failing parents”. Someone needs to ask the question as to why the educational system in the United States, despite spending several times what other countries spend – is so bad? Is it actually a failure of the system, or a failure of the folks who run and fund the system? Seems that every time someone comes up with a bright idea to tweak the schools, from “No Child’s Behind” to high stakes testing -the result is worse than the system being replaced. That is not a failure of the school system. It isn’t a failure of the educators or kids for that matter – and to an extent the parents…

It’s a failure of the clowns in charge.

The national battle over the best way to fix failing schools is ripping through this desert town like a sandstorm, tearing apart a community that is testing a radical new approach: the parent takeover.

Parents here are trying to become the first in the country to use a trigger law, which allows a majority of families at a struggling school to force major changes, from firing the principal to closing the school and reopening it as an independent charter. All they need to do to wrest control is sign a petition.

The idea behind the 2010 California law — placing ultimate power in parents’ hands — resonates with any parent who has felt frustrated by school bureaucracy.

“We just decided we needed to do something for our children,” said Doreen Diaz, a parent organizing the trigger effort. “If we don’t stand up and speak for them, their future is lost.”

Her daughter attends Desert Trails Elementary, where last year two-thirds of the children failed the state reading exam, more than half were not proficient in math, and nearly 80 percent failed the science exam. The school has not met state standards for six years, and scores place it in the bottom 10 percent of schools statewide.

It’s just the type of situation that reformers had in mind when they crafted the trigger law, which applies to 1,300 public schools in California that under certain criteria are labeled as “failing.”

Others see the trigger law as dangerous, handing the complex challenge of education to people who may be unprepared to meet it. Critics also say the law circumvents elected school boards and invites abuse by charter operators bent on taking over public schools.

Trigger laws are spreading beyond California, passing or sparking debates in other states, including Maryland. Even Hollywood has noticed; a feature film, made by the producers of the 2010 documentary “Waiting for Superman,” is coming out this fall.

In Adelanto, the debate is destroying friendships, sowing suspicion and attracting powerful outside interests to this town on the edge of the Mojave Desert.

Parents trying to pull the trigger are backed by Parent Revolution, a Los Angeles organization funded in part by the Bill & Melinda Gates Foundation and the Walton Family Foundation.

In recent weeks, a group of parents opposed to the trigger has formed, with help from the California Teachers Association, the state’s largest teachers union.

“We all agree we’d like to see some improvements, but would you rather blow everything up, start from scratch and hope for better?” asked Lori Yuan, who has two children at Desert Trails and is fighting the trigger. “That doesn’t sound very good to me.”

In a plotline worthy of a soap opera, each group has accused the other of intimidation, harassment and hidden agendas. The district attorney has been asked to investigate charges of fraud, and lawyers are lining up.

“This has never been done before, and it’s very confusing,” said Carlos Mendoza, the president of the Adelanto School District Board of Trustees, who is also a high school teacher and a union member. “If we can get all these outsiders out, we can work out something.”… (more)

This one strikes me as symbolic of the mixed feelings about what has become of 911, and the way it has been used to justify war and atrocity by the Bush Administration – and even today is used in political advertisement.

This 1965 song was written after the JFK assassination. It is widely interpreted as a peon of the willingness of people to buy into false leaders, and false causes – and the failure to listen and communicate because it is easier to follow a leader than think.

I think the “false prophets” in this version are the Giuliani and Bushes who used the event so cynically for political purposes,  in the case of Bush to lead us into another war, or the case of Carl Rove as another “wedge issue” to divide America.

This is the Ground Zero version –

END_OF_DOCUMENT_TOKEN_TO_BE_REPLACED

Posted by btx3 on September 12, 2011 in Great American Rip-Off, Music, From Way Back When to Now

Check this young guy out! He sounds far better than Whitney does anymore!

This kid has some serious chops…