The horrific and despicable attacks in Paris, France will dominate the news cycle for at least a week to come. However for most Americans living in America, and especially for minority Americans, the threat of being harmed by International terrorism is about the same as getting hit by a meteorite from the sky while walking down the street. The threat of being the victim of Domestic Terrorism, either violent – or nonviolent through word, symbolic attack, or state sponsored through the Law Enforcement is an everyday reality.

A “Hate Crime” is an act of Domestic Terrorism by different euphemism. The last week’s series of death threats against black kids at U-Mo, Howard, Mich, Bowie U, and now George Mason illustrates just how common race or ethnic based Domestic Terrorism is. Not even discussing the murders at a Church in Charleston. More people in the US have been killed by Domestic terrorists since 9-11 than jihadis.

Part of the reason for that is, despite the success by ISIS in recruiting a few disaffected Americans to their murderous case – Islamic Fanaticism has no real outlet in America. There is no newspaper spouting “Kill the Infidels” daily in articles across it’s front page, no cyber madrasas teaching the religion of hate, no web sites teaching how to blow up your neighbors for the Islamic fanatic cause… And no television or cable channel(s) dedicated to the views of violent Islamic Fanatics.

But there is for the racist white wing.

“Allowable Terrorism”, brought to you by the right wing media, each and every day.

And so the hate speech begins: Let Paris be the end of the right’s violent language toward activists

In a still developing situation, the city of Paris, France, is under attack by terrorists armed with guns and explosives. Many dozens of people have been killed. A still undetermined number of people have been wounded. The terrorists took dozens of hostages in a concert hall. French police and military forces have been deployed. There is mayhem and blood in the streets of Paris.

President Obama has correctly described this day’s horrific events as “an attack on all of humanity and the universal values we share.”

Terrorism is politically motivated violence against a vulnerable population that is designed to intimidate, sow fear, create panic and alter public policy.

It is not a game.

In the United States, the right-wing media and movement conservatives have for decades consistently used eliminationist and other violent rhetoric to describe liberals, progressives and other people with whom they disagree. As was seen in the recent attacks on a Charleston-area black church, and other violence by right-wing anti-government militias, such rhetoric does not float in the ether of the public discourse, harmless and unacknowledged. No, it does in fact lead to action.

In recent months, the right-wing media has used language such as “terrorism” and “violent,” or that the latter is “targeting police for murder” to describe the Black Lives Matter movement. Such bombastic and ugly screeds–which are wholly unfounded, with no basis in empirical reality–have also been used by right-wing opinion leaders to describe the African-American students who are fighting against racism at Yale and the University of Missouri.

There are many examples of this type of incendiary rhetoric from conservatives and their sympathizers.

Bill O’Reilly has declared “war” on Black Lives Matter and in doing so described them as a type of contemporary Ku Klux Klan (KKK). At its height of popularity in the United States during the late 19th and early 20th centuries, the KKK was America’s largest terrorist organization. It was responsible for the murders of thousands of African-Americans. In contrast to the KKK, Black Lives Matter is a group dedicated to protecting the human rights of all people against state-sponsored violence and police thuggery and murder.

Ben Carson, in his designated role as a black conservative whose primary purpose is to disparage black Americans and to excuse-make for white racism, recently told Fox News’ Megyn Kelly that the black and brown students who are advocating for their full rights and respect at Yale University are ushering in “anarchy” and “this is just raw emotion and people just being manipulated, I think in many of these cases, by outside forces who wish to create disturbances.”

Likewise, Fox News has repeatedly described the student protesters at Yale and Missouri using the same language. O’Reilly has even gone so far as to suggest that Black Lives Matter and the students who are protesting racist treatment are part of a cabal that is engaging in “fascist” behavior and “running wild” against white people. Trumping his allusions to “fascism,” on his October 22, 2015 episode of his TV show, Bill O’Reilly even made the absurd claim that Black Lives Matter is akin to the “Nazis.”

These are implicit threats and overtures to violence as racial authoritarian fascists are a clear and present danger to democracy and freedom. Thus, they must be eliminated by any means necessary.

Other critics of the student activists at Yale University and Missouri such as The Atlantic’s Conor Friedersdorf have even made the absurd claim that so-called “safe spaces” are being “weaponized” by student activists in order to deny free speech.

Terrorism has been practiced in the United States. It was used by a Herrenvolk white settler society built upon the genocide of First Nations peoples and the enslavement of African-Americans to control, intimidate, and murder non-whites. The decades of Jim and Jane Crow white supremacy were also a form of State-sponsored terrorism as well. Political violence continues in the present where in too many of America’s communities, police and other security forces kill with impunity, force the black and brown poor into a state of “custodial citizenship”, and act in a thuggish and illegal way towards the country’s most vulnerable citizens.

Despite what the right-wing media, Bill O’Reilly, and the opinion leaders in the White Right routinely bloviate, those groups and individuals are not terrorists.

Real terrorists have killed people in the streets of Paris. The right-wing media needs to take note of that fact and moderate their rhetoric and abusive language accordingly.

Given the American right-wing’s casual habit of using violent language to describe their foes, and to gin up fear and anxiety among the movement conservative base, the Fox News’ right-wing echo chamber and its elites should be ashamed given the death and destruction that terrorism actually reaps in practice. 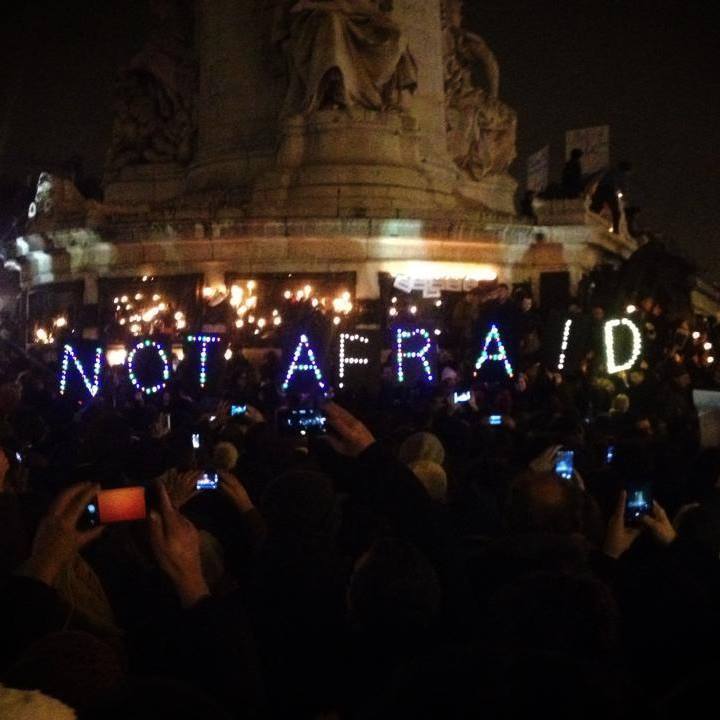 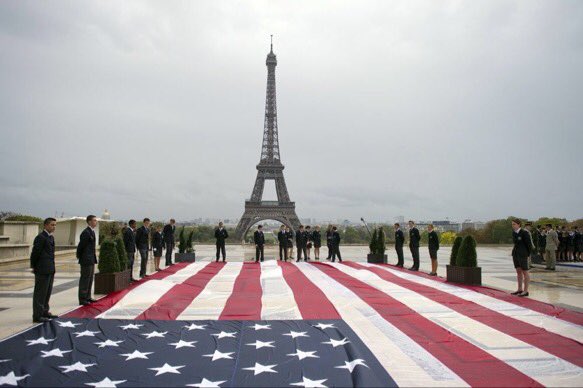 Posted by btx3 on November 14, 2015 in General, Uncategorized

It is difficult to travel through many urban areas without seeing the seemingly ubiquitous food truck. From their humble origins supplying Hot Dogs and Burritos to construction workers and tourists – some entrepreneurs have branched out into quality foodstuffs, covering a variety of tastes. Ergo – the Food Truck has gone upscale!

So upscale in fact, that the humble trucks have gone international – now invading the streets of the urban epicurean center of the world – Paris.

So are the French buying cheap eats? Throw a little Camembert on that burger, and a slice of truffle in that soup, and voila!…

They even have the Chile pepper averse French (Hot sauce ain’t on the menu in France) eating Tacos… Which is amazing.

An artisanal taco truck has come to Paris. The Cantine California started parking here in April, the latest in a recent American culinary invasion that includes chefs at top restaurants; trendy menu items like cheesecake, bagels and bloody Marys; and notions like chalking the names of farmers on the walls of restaurants.

In France, there is still a widespread belief that the daily diet in the United States consists of grossly large servings of fast food. But in Paris, American food is suddenly being seen as more than just restauration rapide. Among young Parisians, there is currently no greater praise for cuisine than “très Brooklyn,” a term that signifies a particularly cool combination of informality, creativity and quality.

All three of those traits come together in the American food trucks that have just opened here, including Cantine California, which sells tacos stuffed with organic meat (still a rarity in France), and a hugely popular burger truck called Le Camion Qui Fume (The Smoking Truck), owned by Kristin Frederick, a California native who graduated from culinary school here.

“And, ‘You will never get permission from the authorities.’ ” END_OF_DOCUMENT_TOKEN_TO_BE_REPLACED

Flash Mobs in the US… In France – Flash Cocktail Parties! Rachida Dati Announces 2012 Run for President

This also just in from Paris – Mayor (Paris 7th) Rachida Dati has announced her intention to run for President in 2012. Could Rachida be Europe’s Barack Obama?

Parisian authorities are trying to stop a mass cocktail party organised over the Internet and planned for the Eiffel Tower grounds, after a reveller died on Thursday at a gathering of 10,000 people in western France.

The death was the first on record as a result of “Facebook aperitifs” — giant outdoor drinking parties whose popularity has exploded across France in the last six months and which are organised over the online social network.

The phenomena emerged last November in the western city of Nantes and rapidly spread to other cities. In past weeks reports of these mass parties have sprung up across France.

The Parisian “aperitif” was due on May 23 with a Facebook group having 15,000 people subscribed to the event, the biggest planned in France to date, according to Le Parisien newspaper.

The event was pulled from the website after police warned the organiser of the consequences of staging such a party. The maximum penalty for organising illegal events in France is six months in prison and a fine of 7500 euros ($A10,482).

The parties often turn into mass drinking binges, and police said the man who died on Thursday in the western city of Nantes had been drunk when he plunged head first over a parapet.

Paris Mayor Bertrand Delanoe said the parties risked spiralling out of control and were aimed at enticing a maximum number of people to drink alcohol in public places.

“We want to safeguard this site (Eiffel Tower)… It’s a great site, where more than 4 million tourists visit and we are protecting the residents,” Rachida Dati, mayor of Paris’s 7th district, location of the Eiffel Tower, told local television.

But the potential penalty hasn’t deterred partygoers. A new group entitled “All for the giant aperitif in Paris” administered by 30 people was up and running on Friday afternoon with more than 3800 already people signed up.