Been saying this for a long time – the popular, and often political image of black folks primarily residing in urban ghettos is hopelessly defunct. The urban center is no longer the focus or local of the majority of the black population in America – and hasn’t been for a while. 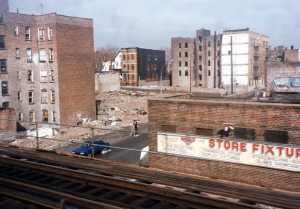 White flight? In a reversal, America’s suburbs are now more likely to be home to minorities, the poor and a rapidly growing older population as many younger, educated whites move to cities for jobs and shorter commutes.

An analysis of 2000-2008 census data by the Brookings Institution highlights the demographic “tipping points” seen in the past decade and the looming problems in the 100 largest metropolitan areas, which represent two-thirds of the U.S. population.

The findings could offer an important road map as political parties, including the tea party movement, seek to win support in suburban battlegrounds in the fall elections and beyond. In 2008, Barack Obama carried a substantial share of the suburbs, partly with the help of minorities and immigrants.

The analysis being released Sunday provides the freshest detail on the nation’s growing race and age divide, which is now feeding tensions in Arizona over its new immigration law.

Ten states, led by Arizona, surpass the nation in a “cultural generation gap” in which the senior populations are disproportionately white and children are mostly minority.

This gap is pronounced in suburbs of fast-growing areas in the Southwest, including those in Florida, California, Nevada, and Texas.

“A new metro map is emerging in the U.S. that challenges conventional thinking about where we live and work,” said Alan Berube, research director with the Metropolitan Policy Program at Brookings, a nonpartisan think-tank based in Washington. “The old concepts of suburbia, Sun Belt and Rust Belt are outdated and at odds with effective governance.”

Suburbs still tilt white. But, for the first time, a majority of all racial and ethnic groups in large metro areas live outside the city. Suburban Asians and Hispanics already had topped 50 percent in 2000, and blacks joined them by 2008, rising from 43 percent in those eight years. END_OF_DOCUMENT_TOKEN_TO_BE_REPLACED