Gasp! “A Taco Truck on Every Corner!”

Last I checked, one of the things folks brag about in this country is entrepreneurship. The country was built on people’s desire and pure moxie to start businesses in good times and bad, and while the majority of those businesses failed – some didn’t. Whether that business was a Mom and Pop store on the corner – or became a multi-billion dollar enterprise the point is that folks worked and scraped and saved and sometimes overcame tremendous challenges. They employ 6 out of every 10 people in this country as small businesses.

Now we have a Trumpazoid who wants to claim that starting a business is bad…Simply because the person starting it s brown.

Last time I checked, it takes quite an investment to start a Food Truck business. The low end on starting that business is about $50,000. Fancy, high end trucks with refrigeration and generators can reach over $200,000. To claim that someone is willing to come over our border illegally, invest $50 or $100,000 in an American Made Truck (likely used), American made stoves, refrigeration, and generator…Pay the business taxes and license fees to an American city or town, submit to health inspections (all generating American jobs)…And then risk it all on business in a roadside location doesn’t sound to me like a losing proposition for America.

And deport the welfare sucking, meth/heroin addicted, white trash trump scum who do nothing for this country….and their jinete de césped.

Posted by btx3 on September 2, 2016 in The Clown Bus, The Definition of Racism, The New Jim Crow

So How Did That Trip to Mexico Work Out, Payaso?

Donald Trump and that “Mexican” Judge

Usually a good idea to pick your fights. A 150 lb guy should probably stay away from smacking 300 lb NFL Linemen – don’t car if your name is Jackie Chan or Bruce Lee – guys who use railroad boxcars as free weights are folks to avoid physical confrontation with. The proverbial 300 lb Lineman in the Courts system is the Judge. Arguing a legal point is one thing – going after the Judge because of his race or ethnicity, as Trump has…

Can lead to painful consequences.

Wee-weenie types like Trump try and hide their male inadequacies with aggression. In the Drumph’s case that means lots of lawyers and litigation, because heaven forbid that 150 lb guy shows up on his doorstep. Trump’s shady, fraudulent business deals are now coming to light. Taking a swing at the Judge was a really dumb move.

An no, Chicken Drumph – there is no precedent for recusing a Judge due to race.

A federal judge blasted by Republican presidential candidate Donald Trump Friday has taken note of the fact that Trump isn’t happy with the way the judge is handling lawsuits over alleged fraud by the Trump University real estate seminar program.

Just hours after Trump used a campaign speech at a San Diego convention center to unleash a remarkable verbal fusillade against U.S. District Court Judge Gonzalo Curiel, the judge — who also happens to be based in the same Southern California city — acknowledged in a much more measured fashion the criticism Trump has aimed at the court.

“Defendant became the front-runner for the Republican nomination in the 2016 presidential race, and has placed the integrity of these court proceedings at issue,” Curiel said in an order unsealing a series of internal Trump University documents that Trump’s lawyers asked be kept from the public.

The judge’s order didn’t make reference to Trump’s 12-minute tirade Friday afternoon in which the all-but-certain Republican nominee called Curiel a “hater” and again invoked his Latino heritage. However, the judge cited a series of news stories from earlier in the campaign, including an NBC story which noted Trump called Curiel “extremely unfair” and an Associated Press story titled, “Trump: Judge’s ethnicity matters in Trump University suit.”

“I have a judge who is a hater of Donald Trump, a hater. He’s a hater. His name is Gonzalo Curiel … I think Judge Curiel should be ashamed of himself,” Trump said at Friday’s rally, echoing many of the same points he made in speeches a few months ago. “I’m telling you, this court system, judges in this court system, federal court, they ought to look into Judge Curiel. Because what Judge Curiel is doing is a total disgrace, OK?”

Curiel said in his order Friday that Trump’s presidential campaign and his criticism of the court were reasons to overrule his objections to the release of so-called “Playbooks” describing Trump University’s operations. The judge also noted that one version was published by POLITICO in March. “The entire 2010 Playbook has been posted online by Politico,” Curiel wrote.

It’s unclear whether the judge knew of Trump’s latest volley of attacks when the judge issued the order Friday afternoon, but it seems possible. Curiously, the Republican candidate laid into the judge at about the same time the judge was holding a hearing less than a mile away on a motion by the Washington Post seeking unsealing of the Trump University-related files. The judge’s order was released a couple hours after the hearing.

Trump suggested Friday, as he has before, that he might move to recuse Curiel from the suits. However, the real estate mogul’s lawyers have never brought such a motion.

Posted by btx3 on May 29, 2016 in Stupid Republican Tricks, Stupid Tea Bagger Tricks, The Clown Bus 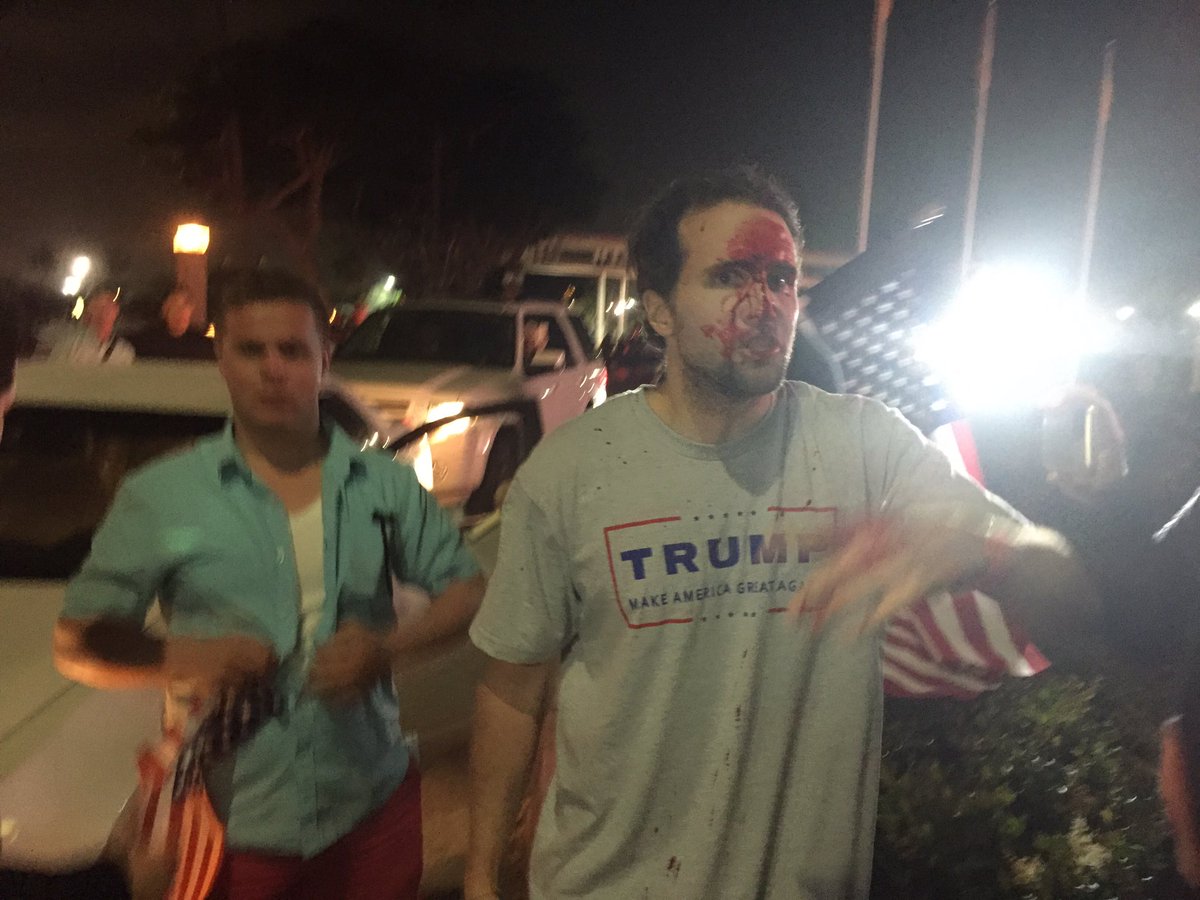 Texas - Don't Want Your Kind Comin' 'Round Here...Except to Trim the Bushes.

But then who is going to cut the grass and change Junior’s diapers? And then there is the small problem that there are now fewer white Republicans in Texas… Than folks with a permanent tan. Come election time, that is a sure remedy to a State’s Red stature.

In a scene from the movie “A Day Without a Mexican”, a Texas legislator bellies up to getting really tough on people who hire illegal aliens…

Bill: Hire An Illegal, Go to Jail — But Maids Are OK

The latest bill addressing illegal immigration and the hiring of undocumented workers in Texas would broaden the scope of employers subject to scrutiny — and extend the penalties for violators to include possible jail time and thousands of dollars in fines. Exempt from the proposed rule? People who hire undocumented workers as domestic helpers in their family homes.

House Bill 1202, authored by state Rep. Debbie Riddle, R-Tomball, would make it a state jail felony to knowingly hire undocumented workers in Texas. The bill would punish those who “intentionally, knowingly, or recklessly” hire or contract with an “unauthorized alien”, or with someone who knowingly subcontracts with an undocumented worker. The maximum fine is $10,000, and guilty parties could face a stint in prison of 180 days to two years. (Riddle has also filed HB 17, legislation that would make being in the state illegally a trespassing offense.)

There are exemptions in HB 1202, however, including one that could make the proposal more acceptable to House Republicans concerned with the federal electronic employment verification system known as E-Verify. While several Republicans have filed bills mandating the use of E-Verify, others suggest it has proven flaws and could potentially act as a deterrent to otherwise capable and legal applicants. Riddle’s bill doesn’t specify E-Verify and says employers have an out if they make a concerted effort to verify status in any manner “that is more likely than not to produce a correct and reliable result.”

Jon English, Riddle’s chief of staff, said E-Verify wasn’t specified because Riddle didn’t want to constrain employers to one system. “As far as we’re concerned, it will be up to whoever is prosecuting the case, what juries are going to say fits the definition of ‘recklessly,'” he said. “But we’re pretty sure that if you make anything that amounts to a good-faith attempt to verify anybody’s information … that that would prevent you from being prosecuted.”

There is also an exception for domestic help. People who hire or contract with someone for work “exclusively or primarily at a single-family residence” are off the hook.

English said that exception was geared toward not “stifling the economic engine” in Texas, so that people who contract out for work in or on their homes don’t have to vet everyone.

Posted by btx3 on March 3, 2011 in Stupid Republican Tricks

LOS ANGELES — Immigrant rights groups Wednesday slammed Arizona lawmakers after they approved a bill which will allow police officers to determine whether suspects are in the United States legally.

Arizona’s House of Representatives passed the bill by a margin of 35 votes to 21 during a session on Tuesday, the legislature’s website showed, mirroring a similar measure passed by the border state’s Senate earlier this year.

The bill will now proceed to Arizona’s Republican Governor Jan Brewer to be signed into law.

The bill makes it a misdemeanor offense for an individual to lack proper immigration paperwork and also allows police officers to determine someone’s immigration status if they believe he or she could be an illegal immigrant.

Currently police can only ask about an individual’s immigration status if they are suspected of involvement in another crime.

However critics say the bill will transform Arizona into a “police state” and even sections of law enforcement have voiced fears it could harm relations between police and the immigrant community.

Chris Newman, Legal Director of the National Day Laborer Organizing Network, which campaigns on behalf of day laborers in the United States, called on Governor Brewer to veto the bill, which he described as “odious” and “unwise.”

“Arizona is on the verge of enacting the most anti-immigrant legislation the country has seen in a generation,” Newman said in a statement.

“We are hopeful Governor Brewer will consult with her legal counsel, issue a veto, and spare Arizona the expense of defending an unconstitutional, unwise, and odious bill in federal courts.

“Arizona has long been a laboratory for anti-immigrant experimentation, and its demagogue leaders have become folk heros for white supremacists throughout the United States, but this bill ushers in a new chapter of disgrace for the state that resisted celebrating the life of Martin Luther King.”