Less than two weeks ago, on Republican legislator called her a “Raghead”.

Several others have suddenly discovered they had sexual relations with her despite her being married – although such recollections seem seriously questionable at this late date.

Mrs Haley, trying to follow the Bobby Jindal path to Republican power grew up as a Sikh, her parents from India. Like Jindal, she converted to christianity and apparently found fun and fortune being a semi-white person in the Republican Party.

It would appear that at least some South Carolina Republicans aren’t real excited about her tan – although not enough to keep her from nearly winning the Republican primary. 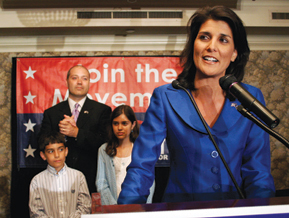 While national Republicans are busy advancing state Rep. Nikki Haley’s bid for governor of South Carolina, much of the state GOP establishment is working furiously to torpedo her chances in the June 22 runoff.

Gresham Barrett, the GOP congressman backed by a high-priced team of veteran consultants, has launched a two-week, take-no-prisoners assault to defeat her. Lt. Gov. Andre Bauer, who came in a distant fourth in the Republican primary, has endorsed Barrett. So has the South Carolina Chamber of Commerce. And some of her statehouse colleagues, after eight tumultuous years of Gov. Mark Sanford, are determined to stop Haley — a Sanford protégé — from taking the top job.

It’s an unusual spectacle: a rare instance in which state and national GOP interests are utterly divergent and at odds.

National Republicans — including former Alaska Gov. Sarah Palin, former Massachusetts Gov. Mitt Romney and the Republican Governors Association — have pushed hard for Haley, pointing to her as a rising star, a potential leader in a party that’s long struggled to bring diversity into its ranks.

Both Palin and Romney endorsed her during the primary, and Romney will campaign for her again on Friday. The RGA — which claimed on primary election night that voters made a “clear choice in Nikki Haley” in spite of the looming runoff — has assisted with money and messaging. Prominent national conservative voices have jumped in to defend her. Weekly Standard Editor Bill Kristol and Gary Bauer, a leading social conservative, have condemned Barrett’s campaign for advancing stories suggesting Haley is not a true Christian and still attends Sikh services, as do her Indian-American parents. Bauer has even called for Barrett to fire the campaign consultant responsible.

Barrett’s having none of it, attacking Haley as “the Sanford candidate,” which for many voters conjures up the outgoing South Carolina governor’s embarrassing jaunt to Argentina to visit his mistress. END_OF_DOCUMENT_TOKEN_TO_BE_REPLACED

ANOTHER SC Republican and Nekked Hiking!

Must be something in the water down there in South Carolina – the ostensible Republican Governor to be seems to have caught a case of “Nekkid Hiking”, much like the outgoing Governor Mark Sanford!

A political blogger claimed today that he had an affair several years ago with a married Republican vying to become the state’s first female governor. Rep. Nikki Haley vehemently denied the allegation, made in a post on Will Folks’ blog that contained no proof. Haley called the claim a “disgraceful smear” planted to derail her campaign, which has gained steam from high-powered endorsements, including Sarah Palin and Jenny Sanford.

“I have been 100% faithful to my husband throughout our 13 years of marriage. This claim against me is categorically and totally false,” Haley, a 38-year-old mother of two, said in a statement. “It is quite simply South Carolina politics at its worst.” Folks is a political consultant who now runs FITSNews.com, a conservative site that features occasionally insightful commentary, thinly sourced stories of state political intrigue, and photos of women in bikinis.

He then goes on to talk about having sex with a second lobbyist, END_OF_DOCUMENT_TOKEN_TO_BE_REPLACED

Fresh from a dalliance with the Argentine Firecracker, it would seem Governor Mark Sanford was on safer ground appointing a “devout” evangelical conservative to the State Board of Education to make sure the kiddies receive a proper, morally upstanding education…

Which we would assume would include 7 or 8 of the 10 Commandments the Governor hasn’t been found to have broken… Yet. 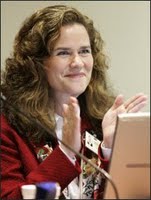 Never mind the fact that the “devout” evangelical in question doesn’t have any children who actually attend the School System, because they have chosen to “home school” them. I mean, isn’t that sort of like a race car driver who never passed the driving test to get a license to drive on the highway?

Eternal right-wing paradoxes and hypocrisy aside, it appears that the new “devout” evangelical, home schooling conservative appointee as Chair of the South Carolina Education Board, and long term member of Gov Sanford’s staff, was using at least one of the three “r’s”…

Kristin Maguire, an Upstate evangelical and one of South Carolina’s most respected social conservatives, has been one of the governor’s closest education policy advisors for years.  She’s also Sanford’s appointment to the S.C. Board of Education, which last year elected her its Chairwoman.

What else is she?

Posted by btx3 on September 1, 2009 in Stupid Republican Tricks

Didn’t they just send Kwame Kilpatrick (and his Honey) ex-Mayor of Detroit to jail for the same thing? Why exactly is Sanford getting special consideration? END_OF_DOCUMENT_TOKEN_TO_BE_REPLACED

Blame it on the Boogie… Indeed – END_OF_DOCUMENT_TOKEN_TO_BE_REPLACED

This one from MSNBC’s Ed Shultz…