The Twitter thing is great. The only issue I have is there needs to be a focus on all women and girls of color, and not just black girls.

Lawmakers Call on FBI to Help on Missing Black Girls

Black lawmakers are putting pressure on the FBI to help investigate the number of missing black minors in Washington, D.C., the Associated Press reports.

In recent weeks, social media users have been tweeting about the lack of media coverage of missing black and Hispanic girls in Washington, D.C. using the hashtag #MissingDcGirls. In the first three months of 2017, D.C. saw 501 cases of missing children and teens, many of whom are black or Latino. Twenty-two of these cases remain unsolved as of March 22

AP reported that Congressional Black Caucus chairman Cedric Richmond and Del. Eleanor Holmes Norton, who represents D.C. in Congress, penned a letter to Attorney General Jeff Sessions and FBI Director James Comey to ask that their departments “devote the resources necessary to determine whether these developments are an anomaly or whether they are indicative of an underlying trend that must be addressed.”

“Ten children of color went missing in our nation’s capital in a period of two weeks and at first garnered very little media attention,” Richmond, who asked to schedule a meeting with Sessions, wrote. “That’s deeply disturbing.”

According to D.C. police, there hasn’t been an uptick in the number of missing children. But they’ve been posting missing person announcements more frequently on their Twitter feed, sparking concerns. Many of the missing children were girls, including 13-year-olds Yahshaiyah Enoch and Aniya McNeil; 15-year-olds Juliana Otero, Jacqueline Lassey, Dashann Trikia Wallace, Dayana White and Morgan Richardson; and 16-year-old Talisha Coles.

14 black girls go missing in 24 hrs & I have to rely on Black Twitter to get info cuz mainstream media’s too busy to care.#missingdcgirls

Glad to see #missingdcgirls is trending. We need to hold @DCPoliceDept accountable to do their job and bring these girls back home.

there are so many girls missing , help find them instead of focusing on some football jersey. #missingdcgirls 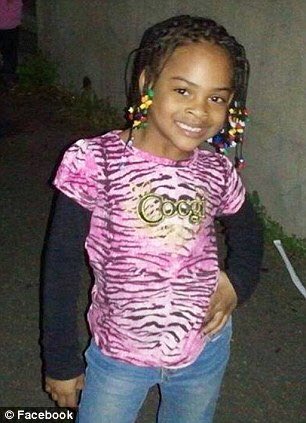 Posted by btx3 on March 26, 2017 in BlackLivesMatter, Domestic terrorism, The New Jim Crow Neo-Nazis and white supremacists have been planning an on-again, off again march in Whitefish, Montana after the mother of well-known white supremacist Richard Spencer began complaining she was being harassed in Spencer’s hometown. Now, it seems, the march is off again after rally organizers were unable to afford the price of the permit to hold the event.

According to The Flathead Beacon, the City of Whitefish received the application for a march on Second Street from Memorial Park to City Hall. The fee for the permit is $125, but the application had only a $65 money order attached to it. Parades are also required to have a certificate of insurance, which the organizers also did not include.

Andrew Anglin, publisher of “The Daily Stormer,” announced to his readers that the city has refused to issue him a permit and he is speaking with lawyers and the ACLU. While that might be accurate, the framing is a little disingenuous as the permits weren’t denied or refused based on who the participants are, rather an inability to pay the bill.

Anglin says that the march will probably have to be rescheduled for sometime in February.

No BLM Chapter? No Problem! BLM March In Dubuque

The Chumph bigots would like you to believe that the issues BLM is talking about only concern black folks…They’re Wrong.

People concerned for the equality of African-Americans take part in a Black Lives Matter rally in Dubuque.

“A lot of people here feel that there is a problem with racism and divide,” said Jill Garcia who helped organize the event.

There’s no official Black Lives Matter chapter in Dubuque, however, this didn’t stop people from all backgrounds marching peacefully together. “It’s important because just to recognize black lives matter, because all lives are supposed to matter,” said Howard Lee III, of the Dubuque Branch NAACP.

This particular march is unique to Dubuque. “The great part about this is that there’s a lot more white individuals here than black individuals,” Lee said.

About 100 demonstrators walking down South Grandview Avenue then gathering at Rockdale Park speaking out about different issues, taking a stand against racism, police brutality and inequality.

One of them, Steven Meier, who admits he was part Dubuque’s racial problems in the late 80s and early 90s. “As a young impressionable man, I really started to feel hatred towards people who didn’t look like me,” said Meier.

But with time and wisdom, he’s now here to make amends. “If we ever wanna see the change and love that we need in this world, it starts by letting people know that we support black lives,” he added.

These Dubuquers say it’s about making the community inclusive for all.

In opposition, an All Live Matter march was also scheduled for the same time and location, however, none of those protesters were noticeable.

At the march, people also wrote notes regarding changes they’d like made to certain policies. Those will be submitted to President-elect Donald Trump and members of Congress.

Posted by btx3 on November 21, 2016 in BlackLivesMatter

Even the little ones “Get It”

And across the country the revolt grows…

Posted by btx3 on November 10, 2016 in Second American Revolution

After Donald Trump won the election on Tuesday night, high school students across the country staged walkouts to protest him on Wednesday.

Students in Arizona walked out in protest of Trump and Maricopa Co. Sheriff Joe Arpaio, who lost in his election on Tuesday. 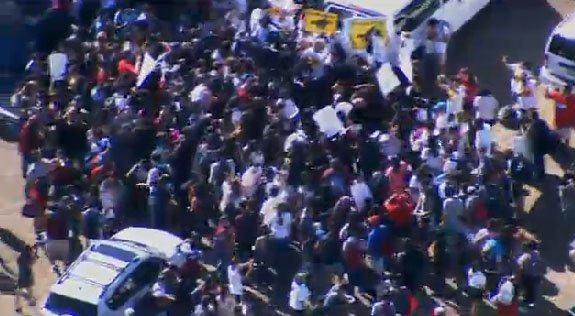 About 1,000 teachers have united for the event, which is supported by the school district and the Seattle Parent Teacher Student Association.

Teachers in the Seattle Public Schools district have planned a Black Lives Matter event next week to coincide with an effort by the school district to close the gap of opportunity between students of different races.

KIRO 7 reports that about 1,000 teachers have ordered Black Lives Matter T-shirts that will be worn Oct. 19 during an event called Black Lives Matter in the Seattle Public Schools, a move that is endorsed by Seattle Education Association, the labor organization that represents more than 5,500 educators.

Teachers at Seattle’s John Muir Elementary School took part in a similar event Sept. 16, wearing Black Lives Matter T-shirts and hosting Black Men Uniting to Change the Narrative, during which black men from the community welcomed kids to school. KIRO 7 reports that the event was almost canceled after the school received threats of violence, but the school staff decided to have the event anyway.

Jesse Hagopian, a teacher at Seattle’s Garfield High School, told KIRO 7 that the threat against John Muir was made by a white supremacist and that Seattle teachers responded by taking the event districtwide.

“I’m going to be promoting the concept that black lives matter and that my black students’ lives matter in my classroom, in the school district,” Hagopian said. “But I want my students to grapple with the issues that the Black Lives Matter movement has raised. And I want them to be able to understand the criticisms of the movement. … I want them to be able to come up with their own decision about what this movement really means.”

KIRO 7 asked Hagopian how he would respond to those who say, “All lives matter.”

“If all lives matter, then black lives would matter,” Hagopian said.

The Seattle Public Schools district respects the teachers’ right to express themselves. A district spokesperson told KIRO 7 that the T-shirts are a good visual, and they hope that the message inspires people to do the work of eliminating opportunity gaps, an effort the district itself is focused on. A campaign highlighting the district’s efforts is also planned for next week.

In addition to the district, the Seattle Parent Teacher Student Association has come out in support of the educators.

The event Oct. 19 will culminate in a rally featuring parents, students, activists and Grammy Award-winning artist Kimya Dawson in the evening.