It Used to Be the Bad Guys Robbed Wells Fargo 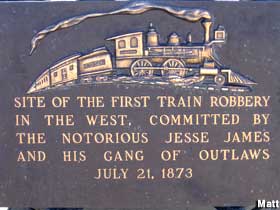 On July 21, 1873, Jesse James and the James-Younger Gang robbed their first train in Adair, Iowa, of all places. They managed to derail the Rock Island train, turning the train on its side, killing the engineer and injuring a lot of its passengers. But that wasn’t enough terror for the passengers - the James-Younger Gang, clad in Ku Klux Klan garb, went up and down the length of the overturned train confronting them and demanding their watches and valuables (although some reports say they stole only from the men). They threw it all in bags along with the money from the train’s safe and ended up getting about $3,000.

How things changed during the Bushit Hold-up!

Madigan says Wells Fargo charged blacks and Latinos much more for mortgages than white borrowers with the same income – and even with lower incomes.

Posted by btx3 on August 6, 2009 in American Genocide, The New Jim Crow