People see black men as larger and stronger than white men — even when they’re not, study says

Even if white and black men are the same heights and weights, people tend to perceive black men as taller, more muscular and heavier. So said a psychological survey, published Monday in the American Psychological Association’s Journal of Personality and Social Psychology, exploring stereotypes about perceptions of male bodies.

What’s more, the study found, nonblack participants believed black men to be more capable of physical harm than white men of the same size. The results also indicated that nonblack observers believed that police would be more justified to use force on these black men, even if they were unarmed, than white male counterparts.

“Unarmed black men are disproportionately more likely to be shot and killed by police, and often these killings are accompanied by explanations that cite the physical size of the person shot,” John Paul Wilson, an author of the study and a psychologist at New Jersey’s Montclair State University, said in a statement Monday.

The psychologists noted that, in the wake of police shootings, the physical size of those killed frequently becomes a focal point. Tamir Rice, who was shot and killed on a Cleveland playground in 2014 while holding a replica gun, was described as “menacing” after his death.

Trayvon Martin, a Florida teen who was shot and killed by neighborhood watch volunteer George Zimmerman in 2012.

And in 2012, after George Zimmerman shot Trayvon Martin, “images circulated depicting Martin as older and larger than he was,” the authors of the new study wrote. “In one notorious example, people widely shared a photograph of a man with facial tattoos in what was purported to be an up-to-date representation of Martin. In fact, it was a rap musician known as the Game who was in his 30s in the photograph.”

Wilson and his colleagues at the Miami University of Ohio and the University of Toronto conducted seven experiments, asking 950 online participants to gauge the physical and threatening characteristics of men, based on male faces and bodies.

In one of the studies, for instance, survey participants gauged men’s height and weights given only photographs of male faces. Of the 90 male faces, half of the men were black and the other half were white. The researchers used images of high school football quarterbacks being recruited to play college ball (therefore their height and weight data were publicly available to the scientists).

Those surveyed rated black men to be consistently larger — even though that was not, in reality, the case. Based on just the faces, they estimated that the black men were slightly taller (an average of 72 inches vs. 71 inches tall) and a bit heavier, at an average of 181 pounds for black men but 177 pounds for white men.

Another study asked participants to match the athlete’s faces to a series of illustrated bodies. These illustrations ranged from the depiction of a slender male body to a shredded physique, not unlike that of former NFL player, actor and deodorant pitchman Terry Crews. As in the cases of height and weight, participants rated black men as more muscular. 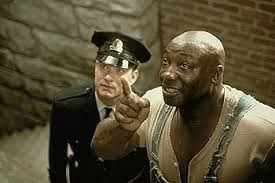 To gauge people’s perceptions of strength, the study authors created a pool of athlete profile photos from a group of black and white men who could bench-press the same weights, on average. Participants judged the black men (from “Not at all strong” to “Very strong”) as stronger.

“We found that these estimates were consistently biased,” Wilson said. “Participants judged the black men to be larger, stronger and more muscular than the white men, even though they were actually the same size.”

The psychologists asked participants to gauge the men’s capability of causing physical harm. The researchers also wanted to know, if the men in the photos were acting aggressively, whether participants thought police would be justified in using force while making an arrest. Black observers did not rate black men as more likely to cause harm.

But nonblack participants did. These participants also indicated that, if police were to use force to subdue the men, it was more likely to be justified in the cases where the men were black. That is, although black and white participants equally overestimated the strength of black men, only nonblack observers considered the black men to be more dangerous.

“Participants also believed that the black men were more capable of causing harm in a hypothetical altercation and, troublingly, that police would be more justified in using force to subdue them, even if the men were unarmed,” Wilson said. “Our research suggests that these descriptions may reflect stereotypes of black males that do not seem to comport with reality.”

The psychologists pointed out that limiting the photos to faces of football players — a sport that puts a premium on strong, large bodies — could skew the results, but they said they would expect similar trends in a broader sample pool of black and white faces.

The study authors also noted that these hypothetical scenarios and results do not necessarily translate into the real world.

“It would be valuable for future research to investigate whether the biases that we have observed here manifest in face-to-face interactions outside of the laboratory,” they wrote in the study. “Despite this limitation, we believe that the consistency of the effects that we have observed from multiple sets of face and body photographs is quite striking on its own.”