Paying the Piper – Trump’s White Supremacists Hit a Land Mine

One of the things that isn’t visible in the MSM is the war between the Chumph Nazis and KKK and the antifa movement. The alt-right racists are getting their heads handed to them as antifa groups have been attacking the basic infrastructure of how the racists recruit. Until Charlottesville, the white-right’s largest propaganda and recruitment outlet the Daily Stormer was enabled by site host GoDaddy, which had defended hosting the site under Free Speech reasoning.

As of today, the Stormer, and it’s Chump Offal…Need a new home. After months of criticism that GoDaddy was providing a platform for hate speech, the Web hosting company announced late Sunday that it will no longer house the Daily Stormer, a neo-Nazi website that promotes white supremacist and white nationalist ideas.

GoDaddy said in a tweet that Daily Stormer had been told it had 24 hours to move its website domain to another provider because it had “violated” the Web host’s “terms of service.

GoDaddy’s announcement was in response to an appeal from a Twitter user who called attention late Sunday to an online post by Daily Stormer founder Andrew Anglin. The post disparaged Heather Heyer, the 32-year-old woman killed Saturday in Charlottesville, police say, after a man plowed into a crowd with his vehicle.

Heyer was among the hundreds who had turned out to protest against the controversial rally being held by white supremacist groups, including neo-Nazis and Ku Klux Klan members. The suspect, James Alex Fields Jr., 20, of Ohio, has been charged with one count of second-degree murder, three counts of malicious wounding and another count related to the hit-and-run, police said.

In the Daily Stormer post, Angelin characterized Heyer as dying in a “road rage incident.” He said she was a “drain on society” and disparaged her appearance. “Most people are glad she is dead,” he wrote.

“@GoDaddy you host The Daily Stormer — they posted this on their site,” Twitter user Amy Siskind said in an appeal to the Web hosting company. “Please retweet if you think this hate should be taken down & banned.”

GoDaddy has previously said that the content, however “tasteless” and “ignorant,” is protected by the First Amendment.  The company told the Daily Beast in July that a Daily Stormer article threatening to “track down” the family members of CNN staffers did not violate Domains by Proxy’s terms of service.

“We do not see a reason to take any action under our terms of service as does not promote or encourage violence against people,” Ben Butler, GoDaddy’s director of network abuse, told The Daily Beast. “While we detest the sentiment of this site and the article in question, we support First Amendment rights and, similar to the principles of free speech, that sometimes means allowing such tasteless, ignorant content.”

The Daily Stormer has been identified by the Southern Poverty Law Center as the “top hate site in America,” and publishes content disparaging Jewish people, people of color Muslims and women.

Another strategy used by antifa is “outing” the bigots. The antifa are photographing them, and releasing those photographs on Twitter, unmasking the bigots.

Another “alt-right” white supremacist marcher photographed in Charlottesville, VA over the weekend has learned why his 19th and 20th century forebears wore hoods to their rallies.

According to the East Bay Times, Cole White of Berkeley, CA has lost his job at Top Dog — a chain of hot dog restaurants.

“Effective Saturday 12th August, Cole White no longer works at Top Dog,” said an email statement from the restaurant chain. “The actions of those in Charlottesville are not supported by Top Dog. We believe in individual freedom and voluntary association for everyone.” 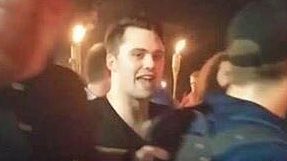 On Saturday, Twitter user @YesYoureRacist began to circulate photos of the tiki-torch-carrying mob of white supremacist who marched on Friday night, as well as photos from the “Unite the Right” march, which quickly devolved into a violent melee in which a 20-year-old white supremacist rammed his car into a crowd of anti-fascist marchers, killing 32-year-old Heather Heyer and injuring at least 19 others.

Using the hashtag #GoodNightAltRight, @YesYoureRacist collected identification on a number of racist marchers, including White and James Allsup, the president of Washington State University’s chapter of the College Republicans.

One marcher — identified as 20-year-old Peter Cvjetanovic — tried to frantically backtrack after being exposed as one of the white supremacist marchers, insisting he’s “not the angry racist” people see in the viral photos.

Posted by btx3 on August 14, 2017 in Chumph Butt Kicking, Domestic terrorism, The Definition of Racism, The New Jim Crow

The first recall petition will be filed today against a Wisconsin Senate Republican who joined the rigged vote to take away public employees freedom to bargain. Organizers say volunteers have gathered more than the 15,588 signatures needed to trigger a recall election of Sen. Dan Kapanke, who represents the La Crosse area. Recall supporters say they plan to take the petitions to Madison after a rally today at La Crosse City Hall.

This is the first  of 19 active recall efforts registered between Feb. 24 and March 2 against 16 senators. The filing comes just before the halfway point in the 60-day window the recall committee has to gather signatures in the district.

The state Democratic Party provided infrastructure support but “not a single paid canvasser was needed to trigger the recall versus Dan Kapanke,” said party spokesman Graeme Zielinski, who credited volunteers for collecting more than 20,000 signatures in less than 30 days.

“It took on a life of its own,” said Pat Scheller, who filed the original paperwork to launch the recall effort. Scheller is  a banker and is not a member of any party.

The state Government Accountability Board could order an election on the sixth Tuesday after determining the petition is in order. If there is more than one challenger, that election would be a primary followed by a general election four weeks later.

Bet they can’t wait until January when the citizens of Wisconsin get to fire Governor Scott Walker.