As Number of Russian Spies at Chumph Jr. Meeting Rise…So Does the Heat

That Chumph Jr meeting with the Russian Lawyer?

4 of them Russian with ties to the FSB/KGB/

Now the Chumph’s are spending campaign money on lawyers to the tune of over $215,000 a month…

Yeah…There is nothing to see here…

Chumph Jr Lawyers Getting their Butts Kicked All Over Cable News

The lies and diversions aren’t going down well…

Muhammad Ali, Jr Detained at Florida Airport For Being Muslim

Let’s face it, the folks who man customs stations and TSA lines aren’t usually drawn from the brightest on the block.Giving power to stupid is like…

A son of boxing legend Muhammad Ali was held for questioning for two hours at a Florida airport upon returning from Jamaica because of his Arabic-sounding name, US media reported.

Muhammad Ali Jr., 44, who was born in Philadelphia and has a US passport, was traveling with his mother Khalilah Camacho-Ali, the late sports icon’s second wife, friend and lawyer Chris Mancini told the Louisville Courier-Journal.

Mancini told the newspaper that both were held for questioning on the Fort Lauderdale International Airport on February 7 because of their Arabic-sounding names.

Camacho-Ali however was released after she showed US Customs agents a photo of herself with her ex-husband.

Ali Jr. however had no such photo — and according to Mancini was held for nearly two hours and repeatedly asked “Where did you get your name from?” and “Are you Muslim?”

When he said that he – like his father – was a Muslim, the agents asked further probing questions.

“To the Ali family, it’s crystal clear that this is directly linked to Mr. Trump’s efforts to ban Muslims from the United States,” Mancini told the Courier-Journal, a reference to President Donald Trump’s late January executive order imposing a 90-day entry ban for citizens of seven Muslim majority countries.

The travel ban has since been halted by a US federal court.

Mancini said that he and the Ali family are trying to find out how many other people were stopped for similar questioning, and are considering a federal lawsuit.

Airport and Customs officials did not answer queries from the newspaper about the case.

Muhammad Ali, one of the iconic 20th century sports heroes, died after a long battle with Parkinson’s Disease on June 3. He was 74.

Ali was celebrated as much for his three world heavyweight titles as for his civil rights battles outside the ring.

In 1964 Ali dropped his birth name of Cassius Clay when he converted to Islam.

The Louisville, Kentucky native was married four times he was survived by seven daughters and two sons.

Posted by btx3 on February 25, 2017 in BlackLivesMatter, Domestic terrorism 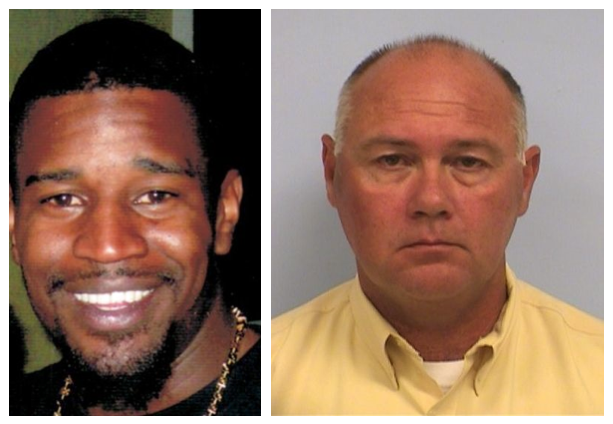 Will a killer cop go free in Texas?

ON JULY 26, 2013, Austin, Texas, police detective Charles Kleinert racially profiled Larry Jackson Jr., proceeded to chase him down over a crime he didn’t commit, and shot him in the back of the neck at point-blank range.

Last week, Larry Jackson’s family sat in a courtroom and listened as Kleinert took the witness stand and justified everything he did that day, including killing Jackson. “He showed no remorse,” said Larry’s sister LaKiza Fowler.

The police claim that they encountered Jackson while investigating a robbery earlier that day at the Benchmark Bank building. Jackson attempted to enter the bank, allegedly claiming to be someone else, but was stopped at the locked doors. He tried to run when Kleinert went to question him.

Kleinert, described by a witness as “out of control,” then pursued Jackson, even commandeering a car to catch up to him. When he did, he beat Jackson. Kleinert then placed his gun to the back of Jackson’s neck and pulled the trigger.

TESTIMONY AT the hearing last week confirmed many of the glaring flaws in the police story that have led Jackson’s family and their supporters to condemn Kleinert and the Austin Police Department (APD) for a racist murder and cover-up.

One witness, who worked at a hospital nearby, was the woman who had her car commandeered by Kleinert. She recounted how Kleinert stopped her, ordered her to unlock her door, got in and frantically yelled to drive down the street toward where Jackson was running. Kleinert was “red in the face” and so “reckless” that she wasn’t sure if he was a police officer, the witness said.

Another witness was David Dolinak, the then-chief medical examiner for Travis County, who reported the findings from Larry’s autopsy. There was a “dark muzzle imprint” around the gunshot wound, according to Dolinak, meaning that Kleinert’s gun was pressed to Larry’s neck when the fatal shot was fired.

Recounting her experiences in court during a panel discussion at the University of Texas at Austin that evening, LaKiza said, “Being in court today and hearing the expert testimony made us realize more how much Larry suffered.”

She and her family have been struggling for justice in this case for more than two years, and she has drawn a conclusion that the audience at the meeting resoundingly agreed with:

The system is unfair. There are clauses in the law to let cops get away with what they do. What you hear in the news is not true. They only give you bits and pieces, and a certain narrative–the police narrative. I want people to see Larry’s humanity. He had three children, a mother, a father, myself, his sister, his only sibling, my daughter, and many other relatives and friends.

This humanity is flatly rejected by the APD and its powerful allies, and has been since day one. The APD stalled for a full day before informing Larry’s mother of his death, even after she filed a missing person’s report. The woman whose car was commandeered expressed similar problems with the department–she attempted three times later that day to report Kleinert’s actions, but the police didn’t take her seriously.

In fact, Austin police were busy getting their story straight and preparing a smear campaign against Larry, joined by the local media and the courts. Kleinert’s lawyers have been attempting to paint Larry as a criminal and Kleinert as the hero cop who was simply carrying out his duties. In court, they pushed the medical examiner to talk about finding traces of PCP during Larry’s autopsy, suggesting that this made him act erratically.

Currently, Kleinert’s lawyers are attempting to get him off on a technicality. He worked on a federal anti-fraud task force at the time of the murder, and duties performed in that role are immune from state prosecution. In court, Kleinert said that he suspected Larry was at the bank to “commit fraud,”, and he thus had probable cause for the chase, justified by his federal duties. Prosecutors pointed out the absurd logic, since Kleinert didn’t even have probable cause to search Larry at the bank, much less chase him down and kill him.

However, LaKiza and other activists involved in the Black Lives Matter movement know the courts work on the basis of power, not logic. It wasn’t until May 2014, almost a full year after the murder, that Kleinert was even indicted. The charge was manslaughter, not murder, and only came after months of rallying and marching–organized the People’s Task Force, a local anti-racist organization–to put pressure on the Travis County district attorney.

Since then, the case has been repeatedly delayed in the courts, and Kleinert’s lawyers have attempted a series of legal maneuvers. The federal immunity claim is the most recent, and could lead to Kleinert going completely free.

Posted by btx3 on October 6, 2015 in BlackLivesMatter, Domestic terrorism

Gary Clark, Jr is about the hottest rising star in Rock/Blues in the industry right now…

To my ear, he needs some work on his band (this doesn’t appear to be his tour band, Omar and the Howlers)…New drummer…new guitarist to back him…Bass guitar is solid.

He is the next superstar!

The Next BB King…

And his newest release “Church”

The Original – Albert Collins “If Trouble was Money”