Nice one by Eboni Williams.

Why isn’t this clown in jail yet…For murder?

Controversial right-wing former Sheriff David Clarke got more than he bargained for when he tried to cast aspersions against the character and record of civil rights icon Rep. John Lewis (D-GA).

According to Mediaite.com, “Fox and Friends” weekend host Eboni Williams — who got her undergraduate degree in Communications and African-American studies before going on to graduate from Loyola University law school — decided not to let Clarke’s talking points go by uncontested.

When asked what he thinks of Lewis’ decision not to attend the opening of Mississippi’s Civil Rights Museum, Clarke — who was busted for plagiarizing sections of his master’s thesis at the Naval Postgraduate School in Monterey, CA — said, “John who?”

“John Lewis — he was bloodied on the Selma bridge, Sheriff, when trying to protest voting rights and a variety of other things,” said Williams.

Clarke tried to smear Lewis as “the most irrelevant member of Congress” before Williams cut him off and said, “Sheriff let me say this to you. For you to say that nobody cares about John Lewis is inaccurate because I assure you that there are many people across this country that absolutely do care about him.”

The former sheriff — who is accused of allowing an inmate to die of dehydration in a Milwaukee jail and of forcing a pregnant prisoner to give birth on the jailhouse floor, resulting in the death of her baby — tried to run to the bogus Republican talking pointthat Democrats opposed the Civil Rights Act, which Williams corrected him on.

“I appreciate that history lesson but as somebody that holds a degree on the subject I really don’t need you to update me on who was required for Lyndon B. Johnson to pass the Civil Rights Act,” she said icily.

Posted by btx3 on December 10, 2017 in Black Conservatives, Faux News 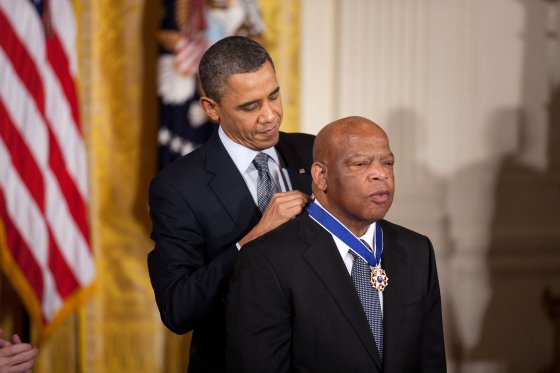 The Georgia Democrat’s “Walking with the Wind: A Memoir of the Movement” was sold out on Amazon and was the site’s No. 2 bestseller. Used copies of the hardcover edition were going for nearly $100. Claiming the top spot on the list was another book by Lewis: “March,” a graphic-novel trilogy about the civil rights movement. The third installment won the National Book Award last year.

Amazon listed both books as “temporarily out of stock” on Sunday. Sales for both had ballooned more than 100,000 percent, according to the Atlanta Journal-Constitution. (Disclosure: Jeffrey P. Bezos, the founder and CEO of Amazon, is also the owner of the The Washington Post.)

On Friday, Lewis said he didn’t see Trump as a legitimate president and wouldn’t be attending the inauguration for the first time in 30 years.

Wow…He went there. This probably means a lot of other folks, who aren’t speaking out – are there too.

John Lewis on Trump: ‘I don’t see this president-elect as a legitimate president’

Rep. John Lewis, the Georgia Democrat and civil rights icon, says he does not see Donald Trump as a legitimate president.

Lewis argued that the suspected efforts of Russian hackers to tilt the election in Trump’s favor are evidence of “a conspiracy on the part of the Russians and others to help him get elected.”

“I think the Russians participated in helping this man get elected,” Lewis said when asked why he does not believe Trump to be legitimate. “And they helped destroy the candidacy of Hillary Clinton.”

According to U.S. intelligence officials, Russian hackers waged cyberattacks on top Democratic Party officials during the campaign in an attempt to disrupt the election. As a result of the hacks, thousands of internal emails from the Democratic National Committee and Clinton’s campaign chairman, John Podesta, were published on the website WikiLeaks, repeatedly embarrassing the campaign.

“It’s not right, that’s not fair,” Lewis said of the hacking. “It’s not the open, democratic process.”

As Todd told Lewis in the segment, the congressman’s statement is sure to “send a big message to a lot of people in this country.” Lewis is widely admired among Democrats, and many liberals remain despondent about Clinton’s upset loss to Trump. As Trump’s critics refuse to come around to him, his approval ratings remain very low.

Thousands of people are expected to protest Trump’s inauguration next Friday. Lewis, for his part, said he will not be attending the ceremony: “It will be the first one that I miss since I’ve been in Congress,” he said. “You cannot be at home with something that you feel that is wrong, is not right.”

Posted by btx3 on January 13, 2017 in Second American Revolution

Posted by btx3 on November 23, 2013 in Black History, Domestic terrorism

Congressman John Lewis is the senior statesman in the House of Representatives (as well as Majority Whip). Here he gives a bit of the history he lived in a speech at Kent State University on the anniversary of the Kent State Shootings. Well worth a listen to understand John Lewis…

more about “Congressman John Lewis Speaks of the …“, posted with vodpod

Tea Bagger Feud Over Use of N-Word

During the run-up to the Health Care vote, Congressman John Lewis and several other black lawmakers were verbally assaulted by Tea Bagger protesters as they walked from one of the Office Buildings to the Capital Building. 4 Congressmen, including a white Congressman reported hearing chants of the N-word hurled at the lawmakers by Tea Baggers.

Within a day or so of the incident being reported in the MSM, a video posted by Andrew Breitbart. Brietbart was central in “breaking” the James O’Keefe white-boy pimp ACORN sting, and providing the videos to Faux News. Brietbart, and others within the Tea Party movement are claiming that the incident reported by the Congressmen never happened, based on a video purportedly shot during the time the Congressmen claim they were assaulted. They are claiming that the Congressmen are lying in order to portray the Tea Baggers in a racist light.

Now it turns out that the video presented by Brietbart and other Tea Baggers of evidence that the assault never happened, was shot at a totally different time than the period in which the Congressmen claim they were assaulted.

Now – this could have been a mistake, but when you consider the same sources are the origin of the now thoroughly discredited ACORN tapes which resulted in the destruction of ACORN…

Then the DOJ needs to start looking at this as a criminal enterprise, and needs to look at possibly charging Mr. Breitbart and his accomplices with several crimes, including potentially violations under the Civil Rights Act, Wire Fraud, and Mail Fraud.

Three Democratic congressmen — all black — say they heard racial slurs as they walked through thousands of angry protesters outside the U.S. Capitol. A white lawmaker says he heard the epithets too. Conservative activists say the lawmakers are lying.

What does the video show? Not much. Indeed, new interviews show that a much-viewed YouTube recording cited as evidence by conservatives was actually shot well after the time in question.

It was March 20, near the end of the bitter health care debate, when Reps. John Lewis, Andre Carson and Emanuel Cleaver say that some demonstrators, many of them tea party activists, yelled the “N-word” as the congressmen walked from House office buildings to the Capitol. END_OF_DOCUMENT_TOKEN_TO_BE_REPLACED