Republican Arizona Governor Jan Brewer should be proud of herself – she just got away with her second murder. Of course she probably doesn’t count the first one since he was Hispanic, and by reports the father of 3.

Tuscon University Medical Center has confirmed that a patient who was refused a liver transplant due to Arizona Governor Jan Brewer’s decision to cut the state benefit that would have made the transplant possible, has died. The patient had been scheduled for the needed transplant but was dropped from the waiting list on October 1st when the cuts went into effect.

Our enemies are going to have a field day. 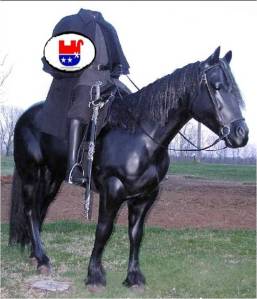 Quite frankly the only headless bodies I see right about now are the Tea Bagger style conservatives whose lies have reached epidemic proportions.

Headless bodies and other immigration tall tales in Arizona

Ay, caramba! Those dark-skinned foreigners are now severing the heads of fair-haired Americans? Maybe they’re also scalping them or shrinking them or putting them on a spike.

But those in fear of losing parts north of the neckline can relax. There’s not a follicle of evidence to support Brewer’s claim.

The Arizona Guardian Web site checked with medical examiners in Arizona’s border counties, and the coroners said they had never seen an immigration-related beheading. I called and e-mailed Brewer’s press office requesting documentation of decapitation; no reply.

Brewer’s mindlessness about headlessness is just one of the immigration falsehoods being spread by Arizona politicians. Border violence on the rise? Phoenix becoming the world’s No. 2 kidnapping capital? Illegal immigrants responsible for most police killings? The majority of those crossing the border are drug mules? All wrong.

This matters, because it means the entire premise of the Arizona immigration law is a fallacy. Arizona officials say they’ve had to step in because federal officials aren’t doing enough to stem increasing border violence. The scary claims of violence, in turn, explain why the American public supports the Arizona crackdown.

Last year gave us death panels and granny killings, but compared with the nonsense justifying the immigration crackdown, the health-care debate was an evening at the Oxford Union Society.

Two months ago, the Arizona Republic published an exhaustive report that found that, according to statistics from the FBI and Arizona police agencies, crime in Arizona border towns has been “essentially flat for the past decade.” For example, “In 2000, there were 23 rapes, robberies and murders in Nogales, Ariz. Last year, despite nearly a decade of population growth, there were 19 such crimes.” The Pima County sheriff reported that “the border has never been more secure.”

FBI statistics show violent crime rates in all of the border states are lower than they were a decade ago — yet Sen. John McCain (R-Ariz.) reports that the violence is “the worst I have ever seen.” President Obama justifiably asserted last week that “the southern border is more secure today than any time in the past 20 years,” yet Rush Limbaugh judged the president to be “fit for the psycho ward” on the basis of that remark.

One of the things the Tea Baggers group has been wildly successful at is letting Republicans let out their inner bigot.

While “a lot” of illegals hopping over Mexico’s border into Arizona are looking for work, most are running drugs for cartels, says Gov. Jan Brewer in comments yesterday that elicited a chorus of critics who slammed her for everything from political posturing to racism. “I believe today, that the majority of the illegal trespassers are under the control of organized drug cartels and they are bringing drugs in,” Brewer said.

Brewer’s office later backpedaled, saying most human smuggling run by drug rings, which “are by definition smuggling drugs.” Malarkey, one Mexican senator tells theAP: “Traditionally, migrants have been needy, humble people who in good faith go looking for a way to better the lives of their families.” Border Patrol acknowledged some illegals are carrying drugs, but that most “drug smuggling is done by people who intend to do that. That’s their livelihood.” AG Terry Goddard, Brewer’s presumptive Democratic opponent, said Brewer “does not understand the difference between illegal immigration and the organized criminals who are members of the violent drug cartels who pose a very a real danger.”