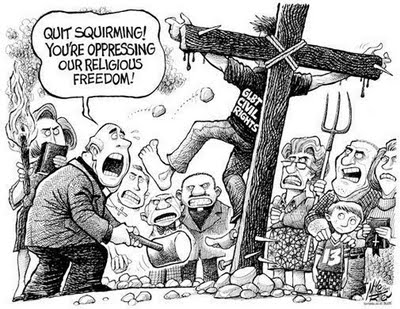 The Trump administration’s Department of Justice on Wednesday undercut the stance of the Obama administration’s DOJ and another autonomous federal agency, by arguing that an existing law, Title VII of the Civil Rights Act of 1964, does not bar an employer from firing a gay employee because he or she is gay.

The filing came the same day as President Trump’s announcement that he would bar transgender troops from serving in the military. Together, the two actions fueled outrage from lawmakers, activists and other leaders who argue that the administration is seeking to roll back the rights and protections won by the LGBT community in recent years.

As a candidate, Trump largely avoided talking about issues related to sexual orientation, but often implied that he wouldn’t interfere with recent progress, even going so far as to promise gays and lesbians, “I will fight for you.”

Since his inauguration, however, Trump has been largely silent on the issue. Social conservatives were key to his election victory, and, notably, his attorney general, Jeff Sessions, has been a longtime opponent of extending job protections based on sexual orientation.

Trump’s DOJ on Wednesday challenged that stance, arguing just the opposite: that Title VII does not protect against discrimination on the basis of sexual orientation. The DOJ’s opinion, filed in a brief in an ongoing legal case between a worker and his boss being heard by the Second Circuit Court of Appeals, says “the sole question here is whether, as a matter of law, Title VII reaches sexual orientation discrimination. It does not, as has been settled for decades. Any efforts to amend Title VII’s scope should be directed to Congress rather than the courts.”

The EEOC filed a motion in the same Second Circuit case just last month, reiterating its 2015 finding that Title VII bans bias based on sexual orientation.

In its filing, the DOJ acknowledged, rather frankly, that its stance on the matter contradicts that of its fellow government agency. “The EEOC is not speaking for the United States and its position about the scope of Title VII is entitled to no deference beyond its power to persuade,” the ruling says.

It’s true that courts are not bound by EEOC positions; they’re only required to honor legislation and the rulings of courts to which their cases can be appealed, including the Supreme Court. (It should be noted that the U.S. Court of Appeals for the Seventh Circuit made the same determination as the EEOC in a case in April.) But the EEOC’s decisions matter because the commission enforces Title VII, has the authority to bring lawsuits based on its rulings against private employers, and adjudicates cases brought by federal workers against federal agencies.

The DOJ meanwhile, is the defense attorney for the United States, so, in many ways, it’s just like any big employer that files an amicus brief in a case. But enforcing discrimination law in contexts outside of employment—housing, voting rights, disability—is part of the department’s mandate, meaning its stance on such issues carries more weight than other employers’, says Marcia McCormick, an employment law professor at St. Louis University School of Law.

Its filing in the Second Circuit case this week extends what has been a years-long debate over the scope of Title VII. The EEOC’s ruling on that matter in 2015 recognized that federal courts had concluded the opposite, but it said that those decisions were “dated.”

The DOJ’s new stance on the matter says that determining such workplace protections should be done through Congress, not through the courts. Lawmakers have pursued that route before. The federal Employment Non-Discrimination Act, which would have outlawed discrimination on the basis of sexual orientation (and, in more recent versions, gender identity) nationwide, was first introduced in 1994. Congress considered it at least 10 times in the following decade and a half, but it never became law. The current Congress, whose GOP leadership includes many social conservatives, seems highly unlikely to act on a similar bill.

The rather cruel thing here is Gospel singer Kim Burrell was speaking to a congregation of folks who probably believe just as she does.Her is her rant about the KGBT community –

Now, Kim makes her living by singing Gospel music. A living which depends on people who can advance her career, and are willing to buy or sell her music. A lot of those folks are gay. Her tirade here was two days before she was scheduled to appear on the Ellen Degeneres Show, Ellen being one of the most prominent Lesbian performers and activists in the country.

So, Kim your hypocrisy is the excuse of religion in wanting LGBT people to all die, but its OK to try and make some money off that group of people and advance your career…before they do.

What I would call a “Career Limiting” performance. Obviously you missed the assembly station …Where God passed our brain cells.

And to be brutally honest – Kim didn’t do too well at the “Singing” station either.

Kim Burrell’s career took another hit Wednesday after it was announced the gospel singer who was recorded in the midst of a homophobic rant is losing her radio program.

“The Kim Burrell show is no longer airing as part of KTSU Radio programming,” Texas Southern University said in a statement.

A video of Burrell surfaced on New Years Eve featuring the singer—who’s performed with the likes of Pharrell and Frank Ocean—railing against “the perverted homosexual spirit” at the Love & Liberty Fellowship Church in Houston.

“That perverted homosexual spirit, and the spirit of delusion and confusion, it has deceived many men and women,” she said. “You as a man, you open your mouth and take a man’s penis in your face, you are perverted. You are a woman and will shake your face in another woman’s breast, you are perverted.”

Burrell was supposed to appear on Ellen Degeneres’s show Thursday, but the comedian—who was recently awarded the Presidential Medal of Freedom, in part, for her courage to come out in public almost 20 years ago—told fans the singer would not be attending. She was slated to perform “I See A Victory” with Pharrell.

Instead, Pharrell sat down with Degeneres solo and issues a powerful rebuke of Burrell’s remarks:

“There’s no space, there’s no room for any kind of prejudice in 2017 and moving on … We all have to get used to everyone’s differences and understand that this is a big, gigantic, beautiful, colorful world, and it only works with inclusion and empathy. It only works that way.

“I’m telling you, the world is a beautiful place but it does not work without empathy and inclusion. God is love. This Universe is love and that’s the only way it will function. And I get it that sometimes some of the divisive stuff works. We learned that lesson last year that divisiveness works. But you have to choose what side you’re on. I’m choosing empathy; I’m choosing inclusion; I’m choosing love for everybody just trying to lift everyone. Even when I disagree with someone, I’m wishing them the best and hoping for the best because we can’t win the other way.”

Posted by btx3 on January 6, 2017 in Black Conservatives, Music, From Way Back When to Now, The Definition of Racism, The Post-Racial Life

Takes One to Know One… Faux’s Latest Racial Crisis

In Faux New’ neverending search for the white Trayvon – Drudge drudged up a moron who operates a homophobic and anti-white racist site.

The problem here is that the two Faux “reporters” are just as racist as the bozo they caught.

Of course the terrorizing white folks here is heightened by the “fact” that the black person in question “held a day job at the Department of Homeland Security”, as a contracts officer. Obviously he was in charge of buying thousands of guns! Oh My!

Unfortunately for Faux, they get that one wrong too. Kimathi works for ICE, and was a small business contracts manager.

Kimathi has a history of suffering from schizophrenia, and by some reports was abused by his Uncle while growing up in Alabama.

Of course, if he had just stuck to the homophobic baiting… He’s have had a job on Faux.

Ayo Kimathi, a Homeland Security employee, is accused of running a racist website. A government official has confirmed that Kimathi is behind the War on the Horizon page. The website warns of a war between the races. Using a pseudonym, Kimathi preaches against whites, homosexuals, and blacks who integrate with other races. As reported by ABC News, Kimathi is employed with the Department of Homeland Security as an officer for Immigration and Customs Enforcement.

The website is disturbingly racist. However, it is not run from a government facility. On the site, Kimathi calls himself the “Irritated Genie.” In his blog, Kimathi speaks out against numerous political figures and celebrities, who he calls traitors to the black race. Some of his rants are directed at Oprah Winfrey, Condoleezza Rice, Colin Powell, and Lil Wayne. He describes President Obama as “a treasonous mulatto scum dweller … who will fight against reparations for Black people in amerikkka, but in favor of fag rights for freaks in amerikkka and Afrika.” Ayo Kimathi’s former supervisor eventually discovered the site. She was surprised about the hateful content. However, she had her doubts about Kimathi in the past:

“This guy is filled with hate… People are afraid he will come in with a gun someday and go postal. I am astounded, he’s employed by the federal government, let alone Homeland Security.”

Employees with the DHS are required to report outside activities, including websites, that may be a conflict of interest. Kimathi’s former supervisor states that he did approach her about the website. However, he was untruthful about the content. Kimathi told his supervisor that he would use the website to display entertaining videos and sell concert tickets. Kimathi’s statements were never verified, and the site remained online. Despite his colleagues’ reservations, Kimathi is described as a hard worker. Part of his job includes advocating for small business owners, many of which are minorities. His former supervisor points out that Kimathi “fights for the little guy… and he’s very good at it.”