A New Documentary on Floyd Norman

Floyd Norman was the first black artist hired by Disney Studios in 1956. If you have watched an animated Disney Movie, there is a good chance you have seen some of Mr. Norman’s work.

Floyd Norman doesn’t think he’s special. Many others know differently, and for those who need more proof, “Floyd Norman: An Animated Life” is delighted to supply it. With all this film’s jubilance, that delight becomes contagious.

“Every time there’s a great moment in animation, look around, there’s Floyd Norman,” one colleague says. Another remarks, “He’s like the Forrest Gump of animation.”

Mr. Norman was hired at Disney in 1956 and became the first African-American animator on its staff. There he helped hand-draw scenes in “Sleeping Beauty,” “Mary Poppins,” “The Jungle Book” and other films, then went on to work at Hanna-Barbera, Pixar and elsewhere. The list of films and cartoons (“Fat Albert” and “Scooby-Doo” among them) he was involved with is enormous. 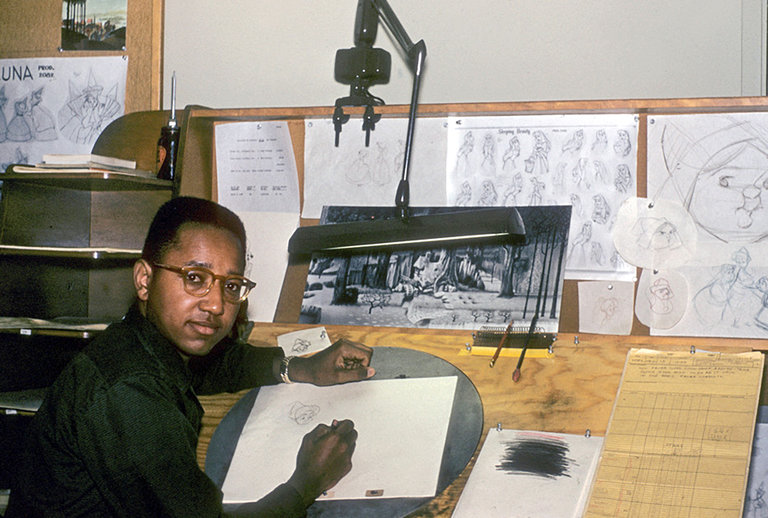 Floyd Norman in 1956 at Disney

Titles aside, this documentary, directed by Michael Fiore and Erik Sharkey, features its own clever and original animation that illustrates scenes from Mr. Norman’s life. While he’s a tireless and upbeat presence, his path hasn’t been without setbacks, including what may have been age discrimination.

At 65 Mr. Norman was let go from Disney. Yet, like a mad cross between Bartleby the Scrivener and a cheery tour guide, he continued to show up at the company’s offices for years and help others until eventually being rehired. Now in his early 80s, he’s still making art.

The humble Mr. Norman is always ready with a laugh, and it’s tough not to smile yourself when he reaches for a pencil and starts drawing. When that happens, it’s redundant to say he’s special. Anyone can see it.

Marian Anderson – On the $5 Bill

Marian Anderson was born in 1897. She was a classically trained singer in the operatic style. She was the first black singer in 1955 yo join the NY Metropolitan Opera.