The faded, type-written piece of paper was buried in a box of 70-year-old documents at a presidential archive, but after it was recently unearthed, the fragile paper shined a spotlight on what a history detective called an injustice that lingers on from the Second World War – that of some black heroes who fought, but were forgotten.

“Here is a Negro from Philadelphia who has been recommended for a suitable award… This is a big enough award so that the President can give it personally, as he has in the case of some white boys,” stated the 1944 U.S. War Department memo to the Franklin D. Roosevelt White House.

The memo was written about Army Cpl. Waverly Woodson, Jr., and the “suitable award” important enough for Roosevelt to consider personally giving Woodson was the Congressional Medal of Honor, the nation’s highest military award given for valor. It would recognize his heroic actions as a combat medic on Omaha Beach, June 6, 1944, during the first hours of the Allies’ D-Day invasion of Europe.

But Woodson, who was black, never received the Medal of Honor or the Distinguished Service Cross, the military’s second-highest honor. Now his family, with the help of the author of a new book on his unit and a sympathetic congressman, are trying to restore and highlight a page erased from the history of the Greatest Generation by requesting the Medal of Honor be finally given to him.

“It’s never too late. It’s always possible to right a wrong. We need to let the future generations know what happened in World War II. The younger generation doesn’t even know what World War II was,” Woodson’s widow, Joann, told ABC News in an interview on Tuesday, two days before President Obama is scheduled to bestow a Medal of Honor on a veteran of the War in Afghanistan. 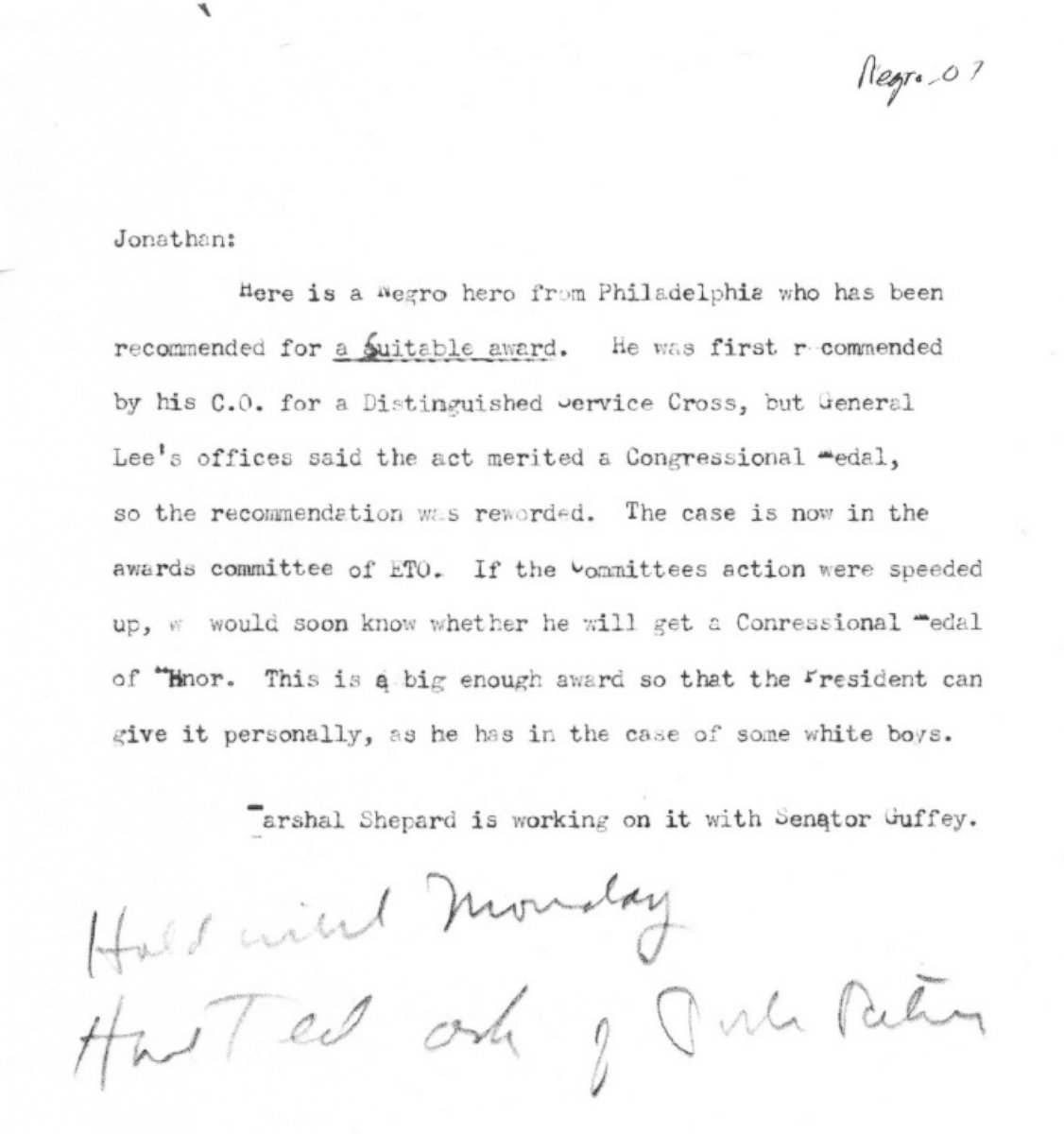 Joann’s late husband, who went by “Woody” and died a decade ago, had been a combat medic with the Army’s all-black segregated 320th Barrage Balloon Battalion and saved dozens, if not hundreds, of troops on the battle-ripped landing area known as Omaha Beach, the stretch of coastline that saw the worst fighting on D-Day. Instead of the highest distinction or the DSC, he received the Bronze Star Medal, the fourth-highest individual military honor.

No records have survived to explain why Woodson was denied a White House ceremony presided over by FDR to receive the Medal of Honor. But one fact remains: not one of the hundreds of thousands of African-Americans who served during World War II received the Medal of Honor at the time.

It wasn’t until 1997 that seven black troops from World War II were given the Medal of Honor by President Clinton, but Woodson was not among them. Woodson, like 16-18 million other soldiers, lost all of his military records in the infamous 1973 fire at the National Personnel Records Center in St. Louis.

That is, until the Philleo Nash memo was discovered.

“It was tucked in voluminous folders inside dusty boxes,” Linda Hervieux, author of the new book, “Forgotten: The Untold Story of D-Day’s Black Heroes, at Home and Overseas,” told ABC News in an interview.

It was Hervieux who discovered the 1944 memo at the Harry S. Truman Presidential Library. It was written by War Department aide Philleo Nash to a colleague, which is the only surviving record known to exist regarding Woodson, who was described in newspapers that served the African-American community in 1944 as the “No. 1 Invasion Hero.” Hervieux spent five years researching her book on Woodson and his outfit, the 320th Barrage Balloon Battalion.

Nash was an assistant director in the Office of War Information and wrote the typed page as a memo to Jonathan Daniels, a Roosevelt White House aide. Nash wrote that Woodson’s commanding officer had recommended him for the Distinguished Service Cross, but the office of U.S. Gen. John C. H. Lee in Britain had upgraded the recommendation to the highest decoration.

“Something happened between his commanders deciding he should get the Distinguished Service Cross and be upgraded to the Medal of Honor, but we don’t know what because those records are no longer there,” Hervieux said. “But Waverly Woodson’s heroics on Omaha Beach were clearly ignored and forgotten because the Army was racist to its core.”

Woodson’s little-known Barrage Balloon Battalion was responsible for hoisting huge balloons on the front lines of Normandy, France in an effort to deter German fighter planes from strafing or dive-bombing the infantry, Hervieux recounts in her book.

As a combat medic in the battalion, Woodson fought to save wounded and dying American troops, black and white alike, he was hit by shrapnel in the leg and buttocks but kept working.

“At that time,” Woodson once told an interviewer, “they didn’t care what color my skin was.”

In her book, Hervieux writes, “Throughout the day and night and into the next day, Woodson worked through his pain to save lives. He pulled out bullets, patched gaping wounds, and dispensed blood plasma. He amputated a right foot.”

Hervieux describes Woodson as the 320th’s “undisputed hero,” continuing to save lives during the invasion assault despite being seriously wounded by shrapnel. (When a mine blew up next to the landing craft he was on) After another medic slapped a dressing on his leg, Woodson later recalled wisecracking, “Close. Mighty close.”

Then, after resuscitating another four drowning men, 30 hours after he landed on Omaha Beach, Hervieux said Woodson “collapsed.”

His widow, Joann, now 86 herself, said she married a hero, even if discrimination in the era of Jim Crow left him forgotten by history for decades.

“That’s the kind of man he was,” Joann Woodson told ABC News on Tuesday from her home in Clarksburg, Maryland. “He was dedicated. Under fire, I don’t think he thought about it — his own safety.”