If you have ever heard the stereotype about football players being mostly brawn and few brains…Think on this. Alan Paige was part of the most feared defensive front line in football during the 80’s. As Defensive End, Paige’s quickness gave offensive lines fits. I saw a game in the mid 70’s where after some trash talk by opposing players after a holding penalty, Paige went on to sack the Oakland Raider’s quarterback, Ken Stabler 3 times in a row on successive downs.

Paige also was, from the beginning committed to improving the community though education. 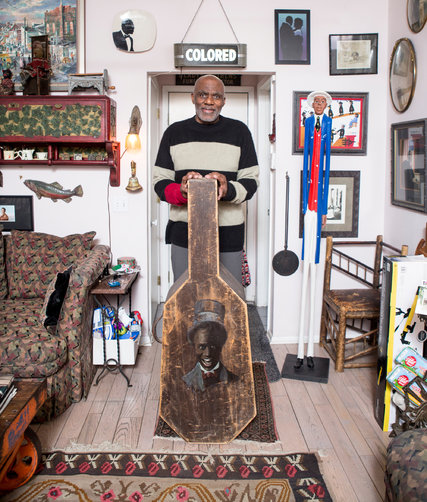 Justice Alan Paige, with some of the Black Americana collection at home.

Elected to the Minnesota State Supreme Court in 1992, Justice Page stepped down from the court last summer, having reached its compulsory retirement age of 70. The first African-American on the court, Justice Page is well known in Minnesota legal circles for his carefully crafted opinions (occasionally livened with quotes from Dr. Seuss), his concern for civil rights and, more lightheartedly, for his colorful bow ties.

“I witnessed him focusing on getting the law right,” said his former Supreme Court colleague, Justice Paul Anderson (also retired). “He was very focused on equity and the elimination of discrimination.”

Justice Page doesn’t ring a bell? You might know him better from his previous career as a professional football player for 15 years, mostly with the Minnesota Vikings and, toward the end, with the Chicago Bears. A graduate of Notre Dame, Mr. Page was a remarkably quick defensive tackle, the most feared of the Vikings’ legendary front four, the Purple People Eaters.

He made six All-N.F.L. selections, and nine straight Pro Bowls. He retired from football in 1981. Seven years later he was inducted into the Pro Football Hall of Fame.

In person, Mr. Page is considerate and thoughtful, reflecting carefully before answering a question. At age 70 he still moves with the grace of an athlete.

But having reached pinnacles of success in two very different careers, surely it must be time to kick back, maybe hit the golf course and the nostalgia circuit? Hardly.

“Once I left the court, that experience was behind me and I am trying to figure out the new thing,” he says. “I have the sense that I want to do something with educating young children.” (Later, he added that golf is a “good walk spoiled,” and rather than look back, he prefers “looking forward.”)

Mr. Page has visited a lot of classrooms, observing that in the early years of elementary school all children are curious, eyes bright and lively. Yet for some the lights have dimmed by the time they reach the fifth, sixth and seventh grades, especially among young people from deprived backgrounds.

“My thinking is if you can get these young people thinking critically early on — first, second, third grade — things will change dramatically in terms of educational achievement,” he said. “Maybe I am naïve, but I don’t think it is mission impossible.”

Mr. Page is unusually accomplished, but he is far from alone in searching for another meaningful act at his stage of life. The word “retirement” still suggests that it’s time to stop working and embrace leisure full time. That’s not the case for growing numbers of aging Americans. They want to stay engaged in the broader society and economy, continuing to be useful by tapping into their accumulated skills and experience.

“He has always been committed since he was quite young to really make a difference in society and to create and leave a legacy,” said Mr. Page’s wife, Diane. She also “retired” after a career of four-plus decades as a marketing research consultant. Retired isn’t the right word for her, either.

The power of education to make a positive difference is one of Mr. Page’s core beliefs. Even in his 1988 talk at the Pro Football Hall of Fame, he focused on the transformative value of education, highlighting in particular the need for investing in black teenagers, “the most unemployed and undervalued people in our society.”

Looking ahead to new challenges and not back on old glories, Mr. Page asked the audience: “What contribution can I still make that would be truly worthy of the outpouring of warmth and good feelings I have received today? And the answer, for me, is clear: to help give other children the chance to achieve their dreams.”…Read The Rest Here…

The only good news about this is police have at least one of the suspected shooters in custody.

Police believe that the shooting was random.

The Knoxville, Tennessee, community is reeling after a high school football player was killed shielding three girls from gunfire.

Zaevion Dobson, 15, jumped on top of the girls to protect them as gunmen opened fire in their neighborhood at around 10 p.m. Thursday, local news station WATE reported. The girls were uninjured.

Known as “Zae,” the teen played on the Fulton High School football team with his brother, Zack.

“He came home from school, did his homework, watched film, watched documentaries of it, players. That’s what he loved — football,” Zack told news station WVLT.

His coach, Rob Black, described Zae as a well-liked leader.

“Unfortunately, they picked a random group of young men and women who were just hanging out and trying to prepare to celebrate the holiday,” Rausch said.

Rausch explained that the shootings kicked off when someone shot and wounded 46-year-old Lisa Perry, who was inside her apartment. Perry’s 23-year-old son, Brandon Perry, and others then allegedly drove to the neighborhood where Zaevion lived and began firing at random.

Brandon Perry was later found shot after crashing his car into an apartment, and died of his injuries.

Posted by btx3 on December 19, 2015 in BlackLivesMatter