Ageism – The Silent Destruction of the Middle Class 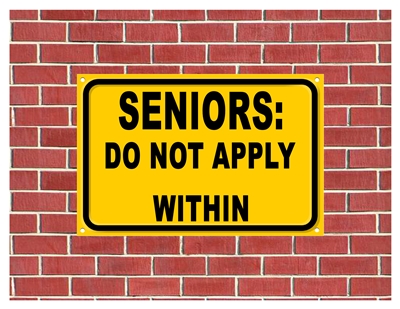 Elizabeth White has been on the edge of the financial cliff for years, but you’d never know it from outside appearances. “Everybody is pretending,” she says. In her self-published book “Fifty-Five, Unemployed, and Faking Normal” she painfully chronicles the crash of a flourishing career and upper-middle class lifestyle.

Elizabeth in this case is fighting two monsters ageism and racial discrimination.

The most successful meritocracy in America is the US Military – despite some setbacks due to politicization  during the Bush Administration under Donald Rumsfeld. Coming in second is the US Government. Dead last is commercial industry.

The False Promise of Meritocracy

Managers who believe themselves to be fair and objective judges of ability often overlook women and minorities who are deserving of job offers and pay increases.

Americans are, compared with populations of other countries, particularly enthusiastic about the idea of meritocracy, a system that rewards merit (ability + effort) with success. Americans are more likely to believe that people are rewarded for their intelligence and skills and are less likely to believe that family wealth plays a key role in getting ahead. And Americans’ support for meritocratic principles has remained stable over the last two decades despite growing economic inequality, recessions, and the fact that there is less mobility in the United States than in most other industrialized countries.

This strong commitment to meritocratic ideals can lead to suspicion of efforts that aim to support particular demographic groups. For example, initiativesdesigned to recruit or provide development opportunities to under-represented groups often come under attack as “reverse discrimination.” Some companies even justify not having diversity policies by highlighting their commitment to meritocracy. If a company evaluates people on their skills, abilities, and merit, without consideration of their gender, race, sexuality etc., and managers are objective in their assessments then there is no need for diversity policies, the thinking goes.

But is this true? Do commitments to meritocracy and objectivity lead to more fair workplaces?

Emilio J. Castilla, a professor at MIT’s Sloan School of Management, has explored how meritocratic ideals and HR practices like pay-for-performance play out in organizations, and he’s come to some unexpected conclusions.

In one company study, Castilla examined almost 9,000 employees who worked as support-staff at a large service-sector company. The company was committed to diversity and had implemented a merit-driven compensation system intended to reward high-level performance and to reward all employees equitably.

But Castilla’s analysis revealed some very non-meritocratic outcomes. Women, ethnic minorities, and non-U.S.-born employees received a smaller increase in compensation compared with white men, despite holding the same jobs, working in the same units, having the same supervisors, the same human capital, and importantly, receiving the same performance score. Despite stating that “performance is the primary bases for all salary increases,” the reality was that women, minorities, and those born outside the U.S. needed “to work harder and obtain higher performance scores in order to receive similar salary increases to white men.”

These findings led Castilla to wonder if organizational cultures and practices designed to promote meritocracy actually accomplished the opposite. Could it be that the pursuit of meritocracy somehow triggered bias? Along with his colleague, the Indiana University sociology professor Stephen Bernard, they designed a series of lab experiments to find out. Each experiment had the same outcome. When a company’s core values emphasized meritocratic values, those in managerial positions awarded a larger monetary reward to the male employee than to an equally performing female employee. Castilla and Bernard termed their counter intuitive result “the paradox of meritocracy.”

The paradox of meritocracy builds on other research showing that those who think they are the most objective can actually exhibit the most bias in their evaluations. When people think they are objective and unbiased then they don’t monitor and scrutinize their own behavior. They just assume that they are right and that their assessments are accurate. Yet, studies repeatedly show that stereotypes of all kinds (gender, ethnicity, age, disability etc.) are filters through which we evaluate others, often in ways that advantage dominant groups and disadvantage lower-status groups. For example, studies repeatedly find that the resumes of whites and men are evaluated more positively than are the identical resumes of minorities and women.

This dynamic is precisely why meritocracy can exacerbate inequality—because being committed to meritocratic principles makes people think that they actually are making correct evaluations and behaving fairly. Organizations that emphasize meritocratic ideals serve to reinforce an employee’s belief that they are impartial, which creates the exact conditions under which implicit and explicit biases are unleashed.

“The pursuit of meritocracy is more difficult than it appears,” Castilla said at a recent conference hosted by the Clayman Institute for Gender Research at Stanford, “but that doesn’t mean the pursuit is futile. My research provides a cautionary lesson that practices implemented to increase fairness and equity need to be carefully thought through so that potential opportunities for bias are addressed.” While companies may want to hire and promote the best and brightest, it’s easier said than done.

GapJumpers, a Silicon Valley start-up, is focused on making meritocracy a reality by taking a skills-first approach to identifying the highest-performing talent.  Modeled after research showing that blind auditions block biased evaluations, GapJumpers developed an online technology platform that enables hiring managers to hold blind audition challenges. In the challenges, job applicants are given mini assignments that are designed to assess the applicant for the specific skills required for the open position. All submissions are evaluated and ranked, and the top-performing submissions (minus any applicant identifiers) are then reviewed by the hiring manager who selects candidates to bring in to interview. The result: About 60 percent of the top talent identified through GapJumpers’ blind audition process come from underrepresented backgrounds.

Hiring managers do not expect this outcome. “The high percentage of underrepresented applicants that make it through the skills-first screening process is often met with suspicion,” says Sharon Jank, a social psychologist and Ph.D. candidate at Stanford University, who is conducting her doctoral research with GapJumpers.  In her work, Jank has observed that “hiring managers tend to be surprised that the top performing submissions they pick to advance very often come from applicants without an elite education, training, or experience.  This suggests blind performance auditions are a powerful tool to manage bias and address the pervasive and incorrect assumption that elite pedigree best predicts performance of on the job skills.”

In addition to blind auditions, transparency and accountability also support more meritocratic outcomes. Recently, Castilla published the results from a longitudinal study he conducted with the same large service-sector company that he had studied years earlier. After learning from Castilla’s analysis that there were pay disparities in their organization (white men received more compensation than equally performing women, minorities, and non-U.S.-born individuals) the company asked Castilla to recommend practices to close the pay gap….More Here…