Why are the Only Reliable Numbers on Police Shootings in the US in a British Newspaper?

FBI and DOJ been covering up a lot of stuff for a long time….This is just the tip of that dirty iceberg.

The lack of accurate information about police-involved shootings is roiling the nation’s law enforcement community, leaving officials unable to say whether high-profile killings are isolated events or part of an alarming trend, FBI Director James B. Comey said Wednesday.

Speaking to a private gathering of more than 100 politicians and top law enforcement officials, Comey expressed frustration that the federal government has no better data on police shootings than databases assembled this year by The Washington Post and the Guardian newspaper.

“It is unacceptable that The Washington Post and the Guardian newspaper from the U.K. are becoming the lead source of information about violent encounters between police and civilians. That is not good for anybody,” he said.

“You can get online today and figure out how many tickets were sold to ‘The Martian,’ which I saw this weekend. . . . The CDC can do the same with the flu,” he continued. “It’s ridiculous — it’s embarrassing and ridiculous — that we can’t talk about crime in the same way, especially in the high-stakes incidents when your officers have to use force.”…

The summit comes as law enforcement agencies across the nation are taking unprecedented steps to improve transparency and data collection, efforts that could bring new clarity to how often and under what circumstances police officers use deadly force.

In New York, state officials now require a special prosecutor to investigate any death at the hands of police. In Texas, lawmakers recently approved legislation requiring local police to report shootings by their officers. And in California, Attorney General Kamala Harris has released a searchable database containing a decade’s worth of information about deaths in police custody, as well as officers killed or injured in the line of duty.

“We have a system currently that is almost entirely reactive, a system influenced by anecdote and emotion,” said Harris, who has dubbed her database the “Open Justice” initiative. “The beautiful thing about numbers is that they don’t lie.”

In perhaps the most significant development, the Justice Department announced Monday that it, too, is keeping a database of deaths in police custody — the first effort by federal officials to assemble accurate information about such killings as they happen. Until now, federal officials have relied on local police to report officer-involved shootings, but reporting is voluntary and typically occurs months after the fact.

“The administration’s position has consistently been that we need to have national, consistent data,” Lynch said Monday. “We are working closely with law enforcement to develop national consistent standards for collecting this kind of information.”

Posted by btx3 on October 9, 2015 in BlackLivesMatter

Conservatwits love to criticize Obama for “having some nothing for black folks”, knowing full well that in the one or two cases he has said something, they can whine full throttle about our “racist President”.

Obama’s approach from the beginning has been low key. Despite all the caterwauling, whimpering, and hysterics of the Republicans – he gets it done. Sometimes his hand moves in ways which the Public never really recognizes until way too late. This one is a masterstroke!

Case in point – The Justice Department working for Civil Rights in local courts around the country. Of course in some places, specifically those with right wing justices, they know they can’t win – but they can put a point on the case which will may change things in higher court. This started a long time ago under former Attorney General Eric Holder. Good to see Loretta Lynch is continuing the struggle.

Burlington, Wash., was a small city fighting what seemed like a local lawsuit. Three poor people said that their public lawyers were too overworked to adequately represent them in municipal court cases. The dispute went mostly unnoticed for two years, until the Obama administration became involved.

Unannounced, the Justice Department filed documents in the case and told the judge that he had broad authority to demand changes in Burlington and nearby Mount Vernon. The judge quickly agreed and ordered the cities to hire a new public defense supervisor. He also said he would monitor their legal aid program for three years.

That 2013 decision was a significant victory for the Justice Department in a novel legal campaign that began early in the Obama administration and has expanded in recent years. In dozens of lawsuits around the country involving local disputes, the federal government has filed so-called statements of interest, throwing its weight behind private lawsuits and, in many cases, pushing the boundaries of civil rights law.

The federal government has typically waded into local court cases only when the outcome directly affected a federal interest, such as national security or diplomacy. Recently, however, the Justice Department has filed statements of interest in cases involving legal aid in New York, transgender students in Michigan, juvenile prisoners in solitary detention in California, and people who take videos of police officers in Baltimore. The government has weighed in on employment discrimination claims brought by transgender plaintiffs and a lawsuit over the right of blind people to be able to use Uber, a car-sharing service.

“The Justice Department is sending a clear message: that we will not accept criminal justice procedures that have discriminatory effects,” former Attorney General Eric H. Holder Jr. said in February after filing documents in a case involving high court bonds in Alabama. “We will not hesitate to fight institutionalized injustice wherever it is found.”

Civil rights groups have applauded the move — and in turn flooded the Justice Department with requests for government intervention in their cases. But to lawyers on the other side, it can feel as if the government is using private court cases to make political points. 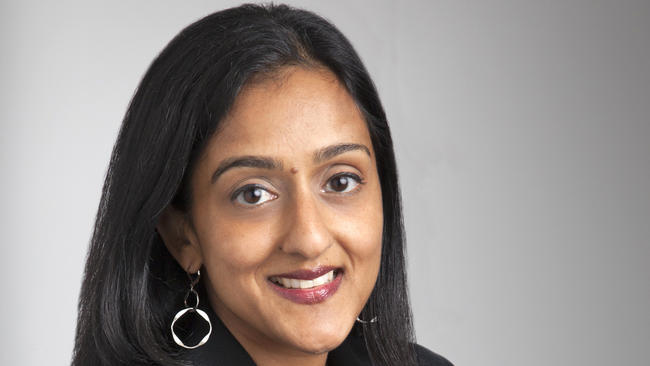 US DOJ Chief Prosecutor of Civil Rights Enforcement, Vanita Gupta. “We want to do as much federal civil rights work as possible, and statements of interest are effective, efficient tools,” Vanita Gupta, the Justice Department’s top civil rights prosecutor, said in an interview.

“From the community’s perspective, it was an ongoing nightmare,” said Scott G. Thomas, the lawyer for Burlington in the lawsuit over legal aid. The Obama administration’s involvement turned the city of about 8,000 people into a national symbol. “Why is the Department of Justice interested in a little case involving two little communities in northwest Washington?” Mr. Thomas said…

By using such court filings in civil rights cases, the Obama administration is saying it has an interest in preserving constitutional rights in the same way it has an interest in foreign policy. There are examples of past administrations using statements of interest to coax public policy — such as in 2005 when the Bush administration intervened in the case over whether to keep Terri Schiavo, a Florida woman with severe brain damage, on life support. But neither career Justice Department officials nor longtime advocates can recall such a concerted effort to insert the federal government into local civil rights cases…

When the Justice Department intervened last year in a lawsuit over legal aid in New York, for example, officials said it took no position on whether the state was violating the constitutional rights of indigent defendants. But government lawyers adopted the same core legal arguments as the plaintiffs and encouraged the judge to scrutinize the legal aid system broadly.

“It was a game changer,” said Donna Lieberman, the executive director of the New York Civil Liberties Union, which was involved in that court fight. The state settled the lawsuit soon after the Justice Department became involved. Ms. Lieberman said the agency’s intervention was “a powerful way to help support a fundamental right.”…More…

Damn, I know the slang in the city moves pretty fast – but this is amazing! A problem I can see they are going to have immediately is regionalization. The Gangstas in Atlanta don’t speak the same language as the Gangstas in New York…

It don’t mean a thang if it ain’t got that twang!

Now they got a career speaking “Ghetto”?

The Department of Justice is seeking to hire linguists fluent in Ebonics to help monitor, translate, and transcribe the secretly recorded conversations of subjects of narcotics investigations, according to federal records.

A maximum of nine Ebonics experts will work with the Drug Enforcement Administration’s Atlanta field division, where the linguists, after obtaining a “DEA Sensitive” security clearance, will help investigators decipher the results of “telephonic monitoring of court ordered nonconsensual intercepts, consensual listening devices, and other media”

The DEA’s need for full-time linguists specializing in Ebonics is detailed in bid documents related to the agency’s mid-May issuance of a request for proposal (RFP) covering the provision of as many as 2100 linguists for the drug agency’s various field offices. Answers to the proposal were due from contractors on July 29.

In contract documents, which are excerpted here, Ebonics is listed among 114 languages for which prospective contractors must be able to provide

Detractors reject the notion that Ebonics is a dialect, instead considering it a bastardization of the English language.

The Department of Justice RFP does not, of course, address questions of vernacular, dialect, or linguistic merit. It simply sought proposals covering the award of separate linguist contracts for seven DEA regions. The agency spends about $70 million annually on linguistic service programs, according to contract records.

In addition to the nine Ebonics experts, the DEA’s Atlanta office also requires linguists for eight other languages, including Spanish (144 linguists needed); Vietnamese (12); Korean (9); Farsi (9); and Jamaican patois (4). The Atlanta field division, one of the DEA’s busiest, is the only office seeking linguists well-versed in Ebonics. Overall, the “majority of DEA’s language requirements will be for Spanish originating in Central and South America and the Caribbean,” according to one contract document.

The Department of Justice RFP includes a detailed description of the crucial role a linguist can play in narcotics investigations. They are responsible for listening to “oral intercepts in English and foreign languages,” from which they provide verbal and typed summaries. “Subsequently, all pertinent calls identified by the supervising law enforcement officer will be transcribed verbatim in the required federal or state format,” the RFP notes.