The city of Memphis engaged in a “massive operation” on Wednesday to take down two controversial Confederate statues before the morning light, the Commercial Appealreports.

The Memphis City Council first unanimously voted to sell two public parks to a private entity. Within minutes, Memphis Police Department officers had deployed to the sites of statues honoring Confederate General Nathan Bedford Forrest and Confederate President Jefferson Davis. Within one hour of the vote, Mayor Jim Strickland had signed the ordinance.

The sale of the parks was a legal mechanism to circumvent a decision by the Tennessee Historical Commission intended to prevent local governments from taking down the statues.

“Health Sciences Park and Memphis Park have been sold. Operations on those sites tonight are being conducted by a private entity and are compliant with state law,” Mayor Strickland explained. “We will have further updates later tonight.”

The Chumph has gotten himself about chest deep in shit right now…And keeps right on digging.

He has increasingly isolated himself, and the circle around him keeps getting smaller and smaller as he strikes out against those who disagree with him

He is looking impeachment in the eye for his many crimes, and is flailing to try and change the subject.

On his latest foray into racism. he has lost any smidgen of corporate support he may have has, as well as patience by the nation’s business leaders.

He has alienated the leaders of our Military, who have publicly repudiated his racism

The neo-nazis really shot themselves and the white-right in the ass in Charlottesville, removing any justification for keeping the statutes with a wall of hate and terrorism.For a number of cities, the rationale to remove the statues is quite simply that they don’t want the same sort of violence and terrorism in their cities. The neo-nazis cold give a shit about confederate memorials. The confederate historical people, and neo-confederates have been thoroughly bent over and sodomized by the Chumph and his Nazi friends.

President Donald Trump says it’s “Sad to see the history and culture of our great country being ripped apart” with the removal of Confederate statues and monuments around the country.

Local and state officials have renewed pushes to remove Confederate imagery from public property since the violence and death of a woman in Charlottesville, Virginia, during a white nationalist rally over the removal of a Robert E. Lee statue.

Baltimore and other cities have already removed or covered up Confederate statues.

Trump in a Thursday tweet called them “our beautiful statues and monuments” and said “you can’t change history, but you can learn from it.”

“Robert E Lee, Stonewall Jackson – who’s next, Washington, Jefferson? So foolish!” Trump continued. “The beauty that is being taken out of our cities, towns and parks will be greatly missed and never able to be comparably replaced!”

Chairman of the Joint Chiefs of Staff Joseph Dunford has strongly endorsed the statements by the leaders of the four major U.S. military services, who spoke out against racism and extremism after last weekend’s violence in Charlottesville, Virginia.

During a visit Thursday to Beijing, Dunford said: “I have seen the chiefs’ tweets and I can absolutely and unambiguously tell you that there is no place for racism and bigotry in the U.S. military or in the United States as a whole.”

He said the “chiefs’ statements were important. They were speaking directly to the force and the American people.”

Dunford said the intent was “to the force, to make it clear that that kind of racism and bigotry is not going to stand inside the force. And to the American people, to remind them of the values for which we stand in the U.S. military, which are reflective of what I believe to be the values of the United States.”

Baltimore, a city in a state that never was part of the Confederacy (not for lack of trying) has 3 confederate monuments. It is a majority black city.

So…the problem I have with Miz Mayor is…WTF is the problem?

It don’t cost $200k to take those down. You call a metal recycling outfit, and they can have the bronze statues for the cost of hauling them away to melt down. Frontloader and Dump truck, a couple of guys with jackhammers take care of the base – cost $3000 if you have to rent the truck. End of story. Alternately keep the base to put something of value to the folks of Baltimore on top of.

Get the feeling that perhaps the reason for Baltimore’s continuing struggles are their lousy leadership?

Baltimore Mayor Catherine Pugh is considering the removal of her city’s Confederate monuments, as New Orleans did just days ago.

“The city does want to remove these,” Pugh told the Baltimore Sun. “We will take a closer look at how we go about following in the footsteps of New Orleans.”

Earlier this month, New Orleans Mayor Mitch Landrieu delivered a speech that drew widespread attention, explaining why he had ordered the removal of that city’s confederate monuments.

Among Baltimore’s monuments to the Confederacy is a statue of Roger Taney, the Supreme Court chief justice who wrote the infamous Dred Scott decision that said, among other things, that African-Americans could not be citizens. The city also has statues of Confederate generals Robert E. Lee and Stonewall Jackson.

A statue of Chief Justice Roger Taney in Baltimore, Md.

Pugh suggested one way to get rid of the statues, telling the Sun, “It costs about $200,000 a statute to tear them down. … Maybe we can auction them?”

The previous mayor of Baltimore, Stephanie Rawlings-Blake, ordered the placement of interpretive plaques at the monuments. One such plaque, placed at a statue of Lee and Jackson, states:

“These two men became subjects of the Lost Cause movement which portrayed them as Christian soldiers and even as men who opposed slavery. Today current scholarship refutes these claims. These larger-than-life representations of Lee and Jackson helped perpetuate the Lost Cause ideology, which advocated for white supremacy, portrayed slavery as benign and justified secession.”

Carolyn Billups, former president of the Maryland chapter of the United Daughters of the Confederacy, told the Sun, “I find it interesting that Baltimore city has that kind of money to move statues when there are problems with crime and schools. I would think that would be more of a priority.”

Posted by btx3 on May 29, 2017 in Black History, Stupid Democrat Tricks

A bit of “History” which should have been removed a long time ago – These statues are nothing more than the symbols which divide America.

Putting these “memorials” up is no different than putting up a statue of Hitler in front of a synagogue.

The protesters were carrying candles? Surprised they weren’t burning crosses. 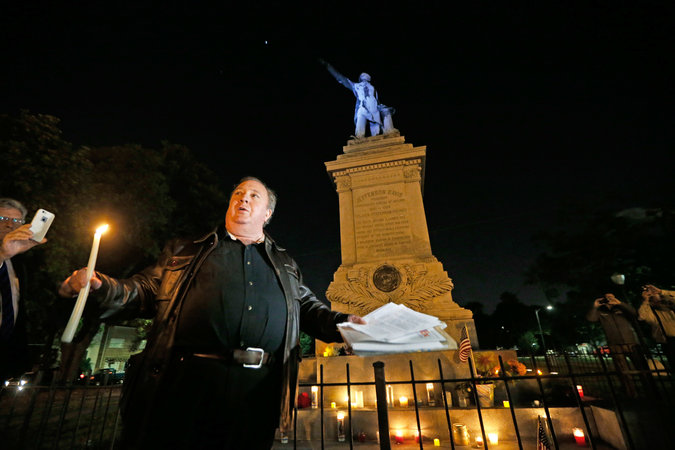 New Orleans on Monday began removing four statues dedicated to the era of the Confederacy, capping a prolonged battle about the future of the memorials, which critics deemed symbols of racism and intolerance and which supporters viewed as historically important.

Workers dismantled an obelisk, which was dedicated to the Battle of Liberty Place and was erected to honor members of the “Crescent City White League” who in 1874 fought against the racially integrated New Orleans police and state militia, Mayor Mitch Landrieu said in a statement.

The workers were dressed in flak jackets, helmets and scarves to conceal their identities because of concerns about their safety, The Associated Press reported.

Pieces of the monument were put on a truck and hauled away.

Other monuments expected to be removed include a bronze statue of Gen. Robert E. Lee in a traffic circle, named Lee Circle, in the city’s central business district since 1884; an equestrian statue of P.G.T. Beauregard, a Confederate general, and one of Jefferson Davis, the president of the Confederacy.

Citing security risks and threats to contractors seeking to do the work, the city would not reveal details about the removal of the other statues.

The monuments were erected decades after the Civil War ended by people who wanted to demonstrate that the South should feel no guilt in having fought the Civil War, the mayor’s statement said.

“The removal of these statues sends a clear and unequivocal message to the people of New Orleans and the nation: New Orleans celebrates our diversity, inclusion and tolerance,” Mr. Landrieu said. “This is not about politics, blame or retaliation. This is not a naïve quest to solve all our problems at once. This is about showing the whole world that we as a city and as a people are able to acknowledge, understand, reconcile — and most importantly — choose a better future.”

The debate over Confederate symbols has taken center stage since nine people were killed at a black church in South Carolina in June 2015. South Carolina removed the Confederate battle flag, which flew at its State House for more than 50 years, and other Southern cities have considered taking down monuments.

After moving the statues into storage, New Orleans will seek a museum or other site to house them. The city said it gained private funding to relocate the statues, though it did not say how much money it secured or identify its source.

The opposition to the monuments’ removal — expressed in op-ed articles, social media posts and shouting at public meetings — was vigorous. A group opposing their removal said it had collected 31,000 signatures for a petition.

Demonstrators gathered for a candlelight vigil on Monday as workers removed the Liberty Place monument.

Robert Bonner, 63, who said he was a Civil War re-enactor, protested the monument’s removal. “I think it’s a terrible thing,” he told The A.P. “When you start removing the history of the city, you start losing money. You start losing where you came from and where you’ve been.”

The removal happened on Confederate Memorial Day, which is formally observed by Alabama and Mississippi to commemorate those who died in the Civil War.

In a statement on Monday, Pierre McGraw, the group’s president, said the removal process had been “flawed since the beginning” and that the use of unidentified money reeks of “atrocious government.”

“People across Louisiana should be concerned over what will disappear next,” the statement added.

In December 2015, the City Council voted 6-1 to take the statues down. In January 2016, a federal judge dismissed an attempt by preservation groups and a chapter of the Sons of Confederate Veterans to stop their removal.

Posted by btx3 on April 24, 2017 in BlackLivesMatter, The Post-Racial Life