White supremacists and confederacy apologists continually try and introduce false narratives about slavery. Not much different than Holocaust deniers. Here is an interesting video debunking some of those myths.

Talk about the “Heart of the South”. Stone Mountain Georgia is the confederacy’s’ Mt Rushmore. None of the confederate icons on Stone Mountain were born in Georgia. Indeed, Robert E, Lee and Stonewall Jackson were Virginians, and Jefferson Davis was born in Kentucky. Martin Luther King was a native son of the state, born in 1929 in Atlanta, Georgia. 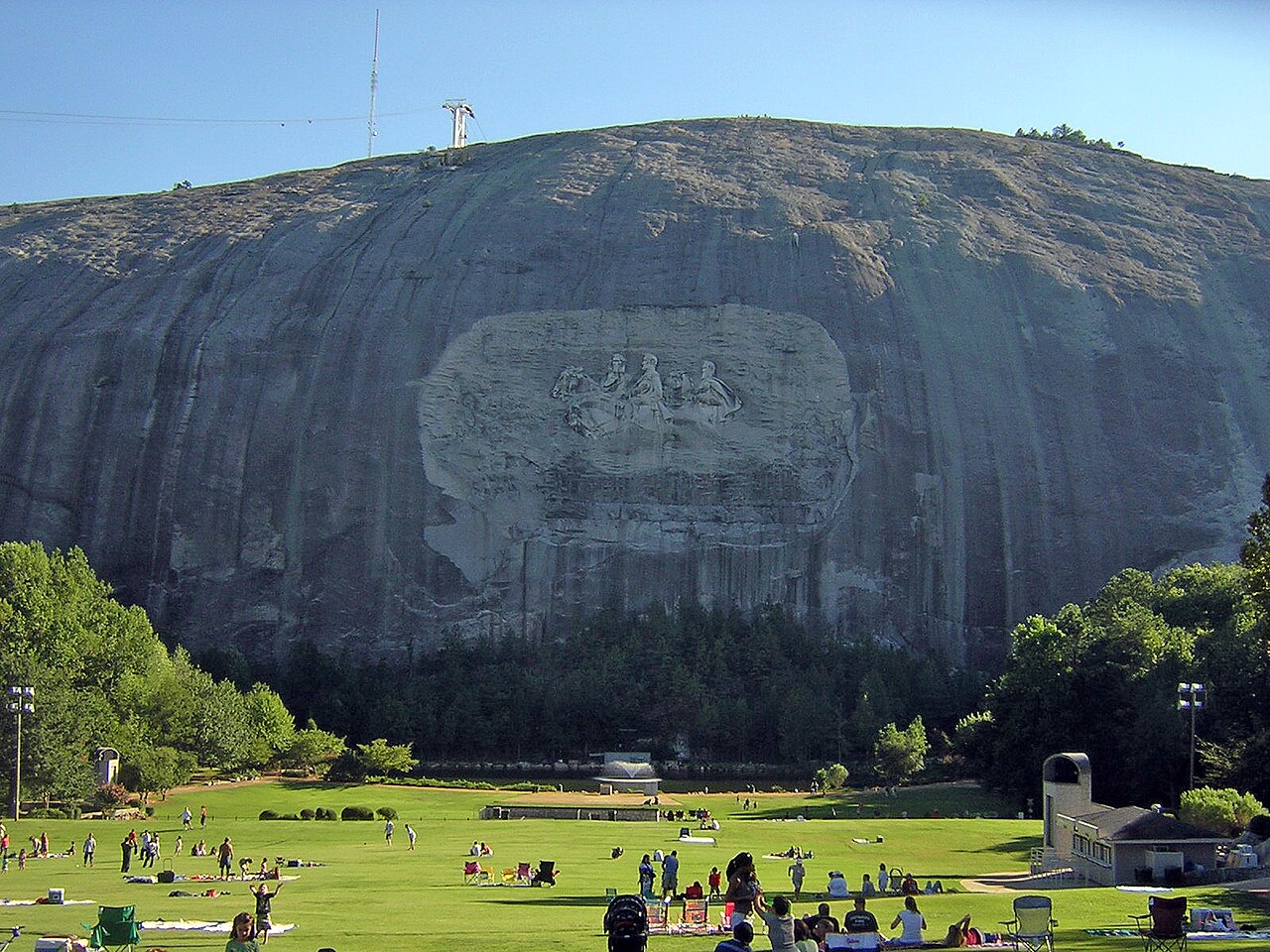 From the Atlanta Journal Constitution in 1915, marking the re-establishment of the KKK with it’s base at Stone Mountain.

It has been called the “Confederate Mount Rushmore” — a tribute etched into Georgia’s Stone Mountain depicting Confederate war heroes Robert E. Lee, Stonewall Jackson and Jefferson Davis. The NAACP has demanded its removal. One local artist has suggested adding Georgia rap duo Outkast to the carving.

Now state authorities have announced plans to use the space to also honor the nation’s most beloved civil rights leader, the Rev. Martin Luther King Jr.

The monument to the martyr would stand amid America’s pro-slavery heroes, on a storied spot that once served as a gathering place for the Ku Klux Klan, the Atlanta Journal-Constitution reported. It would feature a tower that would include a likeness of the Liberty Bell — a symbol of the country’s independence — along with a line taken from King’s 1963 “I Have a Dream” speech: “Let freedom ring from Stone Mountain of Georgia.”

“It is one of the best-known speeches in U.S. history,” Bill Stephens, chief executive officer for the Stone Mountain Memorial Association, told the Atlanta newspaper. “We think it’s a great addition to the historical offerings we have here.”

The “freedom bell” itself will periodically ring from the mountaintop, the Journal-Constitution reported. An exhibit to celebrate African-American Civil War soldiers has been included in the plans, which are likely to be formally rolled out “sometime before the holiday season,” according to the newspaper.

The announcement followed an op-ed from Atlanta Journal-Constitution columnist Jim Galloway, who had called for such recognition. After nine black parishioners were shot and killed in June inside Emanuel AME Church in Charleston, S.C., there was a national backlash against Confederate flags and icons.

So Galloway suggested an idea: An addition to Stone Mountain, to show another side of history.

“Stone Mountain may be required to serve as a Confederate memorial, which makes the subtraction of history difficult,” he wrote in July. “But state law doesn’t rule out the addition of history. To respect the dead is well and good. It is not always wise to give them the last word.

“Perhaps a few words, carved in granite, once spoken by a fellow who had a dream of freedom ringing from the top of Stone Mountain.”

An Atlanta City Council resolution also called on Stone Mountain to consider adding others to the monument, possibly including King.

“The governing body of Stone Mountain and the private company here, they went far beyond that and they decided there ought to be a monument,” Georgia Gov. Nathan Deal (R) said, according to WSB-TV.…More…

There is also discussion of adding a Memorial to black soldiers who served in the Civil War.

One more time… There were NO black confederate soldiers in Virginia! And I highly doubt there were any anywhere else other than the documented case of the New Orleans Regiment, which promptly defected and became the 1st US Colored, and two slave regiments assembled in South Carolina in the last days of the war.

What there were were slaves, who had been lent to the confederate Army in exchange for their Masters not having to serve. These slaves dug fortifications, latrines, and cooked for white confederate troops. They did not carry guns, they did not fight… AND THEY DIED a lot, from diseases infecting the camps. During the siege of Petersberg and Richmond near the end of the war, free blacks were impressed into service, often at gunpoint to dig fortifications.

The question here is why is Virginia using a “history textbook” written by someone who isn’t even a historian? Who is stupid enough (or racist enough) to quote a widely debunked fairy tale used to bolster the Southern Myth…

What it looks like here is that neo-confederate racist Republicans who hold the Virginia Governor’s office are screwing up Virginia’s textbooks the same way the clowns did to Texas’ there.

Black confederates in Civil War? Sure there were...

A textbook distributed to Virginia fourth-graders says that thousands of African Americans fought for the South during the Civil War — a claim rejected by most historians but often made by groups seeking to play down slavery’s role as a cause of the conflict.

The passage appears in “Our Virginia: Past and Present,” which was distributed in the state’s public elementary schools for the first time last month. The author, Joy Masoff, who is not a trained historian but has written several books, said she found the information about black Confederate soldiers primarily through Internet research, which turned up work by members of the Sons of Confederate Veterans.

Scholars are nearly unanimous in calling these accounts of black Confederate soldiers a misrepresentation of history. Virginia education officials, after being told by The Washington Post of the issues related to the textbook, said that the vetting of the book was flawed and that they will contact school districts across the state to caution them against teaching the passage.

Masoff defended her work. “As controversial as it is, I stand by what I write,” she said. “I am a fairly respected writer.”

The issues first came to light after College of William & Mary historian Carol Sheriff opened her daughter’s copy of “Our Virginia” and saw the reference to black Confederate soldiers.

“It’s disconcerting that the next generation is being taught history based on an unfounded claim instead of accepted scholarship,” Sheriff said. “It concerns me not just as a professional historian but as a parent.”

Virginia, which is preparing to mark the 150th anniversary of the beginning of the Civil War, has long struggled to appropriately commemorate its Confederate past. The debate was reinvigorated this spring, when Gov. Robert F. Mc­Don­nell (R) introduced “Confederate History Month” in Virginia without mentioning slavery’s role in the Civil War. He later apologized.

The Sons of Confederate Veterans, a group of male descendants of Confederate soldiers based in Columbia, Tenn., has long maintained that substantial numbers of black soldiers fought for the South The group’s historian-in-chief, Charles Kelly Barrow, has written the book “Black Confederates.”

The Sons of Confederate Veterans also disputes the widely accepted conclusion that the struggle over slavery was the main cause of the Civil War. Instead, the group says, the war was fought “to preserve their homes and livelihood,” according to John Sawyer, chief of staff of the Sons of Confederate Veterans’ Army of Northern Virginia. He said the group was pleased that a state textbook accepted some of its views.

The state’s curriculum requires textbook publishers and educators to explore the role African Americans played in the Confederacy, including their work on plantations and on the sidelines of battle. Those standards have evolved in recent years to make lessons on the Civil War more inclusive in a state that is growing increasingly diverse.

When Masoff began work on the textbook, she said she consulted a variety of sources — history books, experts and the Internet. But when it came to one of the Civil War’s most controversial themes — the role of African Americans in the Confederacy — she relied primarily on an Internet search.

In 1890, Southern states began to adopt explicit literacy tests to disenfranchise voters. This had a large differential racial impact, since 40-60% of blacks were illiterate, compared to 8-18% of whites. Poor, illiterate whites opposed the tests, realizing that they too would be disenfranchised. To placate them, Southern states adopted an “understanding clause” or a “grandfather clause,” which entitled voters who could not pass the literacy test to vote, provided they could demonstrate their understanding of the meaning of a passage in the constitution to the satisfaction of the registrar, or were or were descended from someone eligible to vote in 1867, the year before blacks attained the franchise. Discriminatory administration ensured that blacks would not be eligible to vote through the understanding clause.

Georgia initiated the poll tax in 1871, and made it cumulative in 1877 (requiring citizens to pay all back taxes before being permitted to vote). Every former confederate state followed its lead by 1904. Although these taxes of $1-$2 per year may seem small, it was beyond the reach of many poor black and white sharecroppers, who rarely dealt in cash. The Georgia poll tax probably reduced overall turnout by 16-28%, and black turnout in half (Kousser, The Shaping of Southern Politics, 67-8). The purpose of the tax was plainly to disenfranchise, not to collect revenue, since no state brought prosecutions against any individual for failure to pay the tax.

Racially disparate charging and sentencing has had the effect of disenfranchising millions of black people – enabling Republicans to remove millions of Democrat voters from the roles. It would seem that the new Governor of Virginia wants to keep them from voting…

McDonnell wants to change the process by which non-violent felons apply to have their voting rights restored, the Washington Post reported over the weekend. Whereas before, applicants had had to fill out a one-page form, making the process almost automatic, they now will have to submit an essay outlining their contributions to society since their release. END_OF_DOCUMENT_TOKEN_TO_BE_REPLACED

Republican Party – “Party of the confederacy”

“Are you building the right kind of Republican Party, or are you building a party off of the discards of the Democrats, are you gonna keep building your party with dixiecrats, ex-Democrats who think the Democratic Party is too mainstream, that’s how you’ve been doing it since the 60s, since the 60s, you’ve built a political party, the Party of Lincoln has become the party of the confederacy.”

Chris hit that one…

Right out of the park.

Posted by btx3 on December 23, 2009 in Stupid Republican Tricks

The State of Jones – The Insurrection Against the Confederacy in Mississippi

Here’s one you won’t see in the History Books. A new Book, The State of Jones, the Small Southern County That Seceded From the Confederacy by Sally Jenkins and John Stauffer.

The State of Jones

Southern Historians, who have done much of the work on the Confederacy and the Civil War, have used quite a bit of revisionism to eliminate some uncomfortable facts about the South. The best known of these revisionist texts construct what is known as the Southern Myth.  Whether it’s an attempt to recast the cause of the Civil War as States Rights instead of slavery, or the conditions in which many poor Southerners and slaves lived in – the Southern Myth is a whitewash.

Make room in your understanding of the Civil War for Jones County, Mississippi, where a maverick small farmer named Newton Knight made a local legend of himself by leading a civil war of his own against the Confederate authorities. Anti-planter, anti-slavery, and anti-conscription, Knight and thousands of fellow poor whites, army deserters, and runaway slaves waged a guerrilla insurrection against the secession that at its peak could claim the lower third of Mississippi as pro-Union territory.  –Tom Nissley END_OF_DOCUMENT_TOKEN_TO_BE_REPLACED