The Chumph’s Fellow Molester Goes Down In Alabama

The white-right loses again in special election for the US Senate in Alabama, putting a Democrat in a state-wide seat for the first time since 1992.

The Chumph’s loud support for the child molester seems to have backfired, with a 90% turnout of black voters, voting over 90% against the Chumph’s boy.

Black voters made up 28% of the vote despite being 26% of the population in a huge turnout.

White evangelical voted 80% in support of the child rapist in a near complete denunciation of any christian values.

The mostly white MSM again underestimated the black “grapevine” in the South, which has been there since the days of slavery and was at the core of the Civil Rights movement..To get at that, you need to sit in the black Beauty Salons and Barbershops, and listen after the Church services instead of stopping random people on the street. 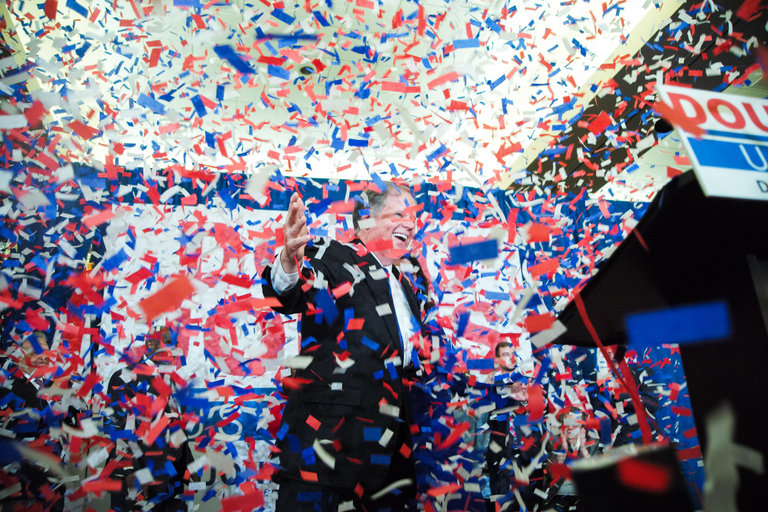 The state’s “black belt” made big turnout gains in support of the Democratic candidate, providing his margin of victory in the Senate special election in a deep red state.

Ahead of Alabama’s special Senate election, there was a clear narrative about the state’s black voters: They weren’t mobilizing.

Six of 10 black voters stopped by a New York Times reporter in a shopping center last week didn’t know an election was even going on, a result the reporter took to mean overall interest was low. The Washington Post determined that black votersweren’t “energized.” HuffPost concluded that black voters weren’t “inspired.”

If Democratic candidate Doug Jones lost to GOP candidate Roy Moore, weakened as he was by a sea of allegations of sexual assault and harassment, then some of the blame seemed likely to be placed on black turnout

ut Jones won, according to the AP, and that script has been flipped on its head. Election day defied the narrative, and challenged traditional thinking about racial turnout in off-year elections and special elections. Precincts in the state’s “black belt,” the swathe of dark, fertile soil where the African American population is concentrated, reported long lines throughout the day, and as the night waned and red counties dominated by rural white voters continued to report disappointing results for Moore, votes surged in from urban areas and the black belt. By all accounts, black turnout exceeded expectations, perhaps even passing previous off-year results. Energy was not a problem.

Exit polls showed that black voters overall made a big splash. The Washington Post’s exit polls indicated that black voters would make up 28 percent of the voters, greater than their 26 percent share of the population, which would be a dramatic turnaround from previous statewide special elections in the South, including a special election for the Sixth District in Georgia which saw black support for Democratic candidate Jon Ossoff dissipate on Election Day.

As Cook Political Report editor Dave Wasserman noted on Twitter, turnout was particularly high in the counties with the highest black populations. In Greene County, a small, 80-percent-black area that Martin Luther King, Jr., frequented in his Poor People’s Campaign, turnout reached 78 percent of 2016 turnout, an incredible mark given that special elections and midterms usually fall far short of general-election marks. Perry County, also an important mostly black site of voting-rights battles of old, turned out at 75 percent of 2016 levels. Dallas County, whose seat is the city of Selma, hit the 74 percent mark. And while the exact numbers aren’t in for all of the majority-black or heavily black counties, it appears black voters favored Jones at rates close to or above 90 percent.

Meanwhile, Moore’s support sagged in mostly white counties. The race was probably over for the former state chief justice when Cullman County, which is virtually all white and heavily supported Trump in 2016, only turned out at 56 percent of its 2016 levels. It really does seem that although many white voters weren’t convinced to vote for Jones, the allegations against Moore persuaded many of them to stay home.

These results demolish the pre-established media narrative about black voters in the state, and defy conventional wisdom. Black voters were informed and mobilized to go vote, and did so even in the face of significant barriers.