Another Brown Man Murder By Cop in Charlotte

Hispanic man call Police for help. They kill him standing on a porch with his hands up.

In early September, members of the Charlotte-Mecklenburg Police Department shot and killed a man named Rueben Galindo. Now, body camera footage shows that the man had his hands up when an officer took his fatal shot.

According to local alternative weekly Creative Loafing, CMPD claims Galindo called 911 on himself on September 6 to tell them (through a Spanish interpreter) that he had a gun, though he did not elaborate.

As they approached, officers told him in Spanish to raise his hands. He complied, and then two officers — Courtney Suggs and David Guerra — fired. It appears that Guerra’s shot was the one that killed Galindo.

Both Guerra and Suggs are on leave, according to local TV station WSOC-TV.

Posted by btx3 on October 8, 2017 in BlackLivesMatter

Welcome to the South, boy!

Why It’s So Hard to Get Ahead in the South

In Charlotte and other Southern cities, poor children have the lowest odds of making it to the top income bracket of kids anywhere in the country. Why?

Shamelle Jackson moved here from Philadelphia, hoping to find work opportunities and better schools for her four children, who range in age from two to 14. Instead, she found a city with expensive housing, few good jobs, and schools that can vary dramatically in quality. “I’ve never struggled as hard as I do here in Charlotte,” Jackson, 34, told me.

Jackson isn’t alone. Data suggests that Charlotte is a dead-end for people trying to escape poverty. That’s especially startling because the city is a leader in economic development in the South. Bank of America is headquartered here, and over the last two decades the city has become a hub for the financial services industry. In recent years, Charlotte and the surrounding area, Mecklenburg County, have ranked among the fastest-growing regions of the country. “Charlotte is a place of economic wonder in some ways, but it’s also a city that faces very stark disparities, and that increasingly includes worrisome pockets of real deprivation,” said Gene Nichol, a professor at the UNC School of Law who has completed an extensive report on local poverty. Some of these disparities bubbled to the surface in September, when protests erupted after a black man, Keith Lamont Scott, was shot and killed by police.

Charlotte ranked dead last in an analysis of economic mobility in America’s 50 largest cities by the Equality of Opportunity Project, a team of researchers out of Harvard, Stanford and Berkeley led by Stanford’s Raj Chetty. Children born into the bottom 20 percent of the income distribution in Charlotte had just a 4.4 percent chance of making it to the top 20 percent of the income distribution. That’s compared to a 12.9 percent chance for children in San Jose, California, and 10.8 percent change for children in Salt Lake City. These statistics are troubling because mobility is essentially just a formal term for the American Dream—the ability to find a good job, provide for children, and do better than one’s parents did. Rather than making it into the middle class in Charlotte, poor children, who are majority black and Latino, are very likely to stay poor.

These are among the lowest odds of advancement in the country. “The South really does struggle,” said Erin Currier, who directed the financial security and mobility project at the Pew Charitable Trusts. Pew found that mobility lags in states including Louisiana, South Carolina, Alabama, and North Carolina.

There’s no obvious reason why cities in the South would perform so poorly across the board. After all, economies like those in Charlotte are booming. In other places with significant economic growth, such as San Jose, this prosperity seems to be widely shared (or at least it was between 1980 and 2012, the time period over which children were tracked in Chetty’s data). In cities across the South though, economic success seems not to have trickled down to lower-income populations.

Chetty and colleagues say that there are a few key factors that play into where people struggle with economic mobility. These areas tend to be more racially segregated, have a higher share of poverty than the national average, more income inequality, a higher share of single mothers, and lower degrees of social capital, which means people interacting with others who can help them succeed, according to Nick Flamang, a predoctoral fellow with the Equality of Opportunity Project.

All of these indicators are present in Charlotte, and throughout much of the South. Segregation took root in the early 1900s, and was reinforced by Jim Crow laws and redlining in the later part of the century. It remains a problem today. The white, affluent population lives in a wedge south of the city. The census tracts north and west of the city are where the low-income people live, and those people are predominantly black and Latino.

The South also has among the highest poverty rates in the country. Mississippi ranks last, Louisiana is 49th, and North Carolina is 39th in the country when it comes to the percentage of people living below the poverty line. While Southern poverty has traditionally manifested itself in rural areas, cities are now home to some of the worst poverty in the region, according to Nichol. “If you look at census tracts, the deepest poverty in North Carolina is right in the middle of Charlotte, the middle of Greensboro, middle of Winston-Salem, the middle of Raleigh,” he said.

Indeed, concentrated poverty is becoming a pressing problem in Charlotte. The Brookings Institution data shows that in 2000, just 2 percent of poor families lived in a census tract with poverty rates of 40 percent or higher in Charlotte. That percentage had climbed to 10 percent by 2012. According to Nichol’s work, 17 census tracts in Mecklenburg County had poverty rates higher than 40 percent, a dramatic increase from 2000, when just four did. I visited neighborhoods like Lockwood, just north of downtown, where homeless people hung out at the gas stations and the small box homes had bars on their windows.

Concentrated poverty is related to another factor Chetty and his colleagues mention: social capital, which is essentially the mechanism that allows people to interact with others and become a part of broad networks that can lead to opportunity. It can help people get hooked up to first jobs, internships, and scholarships. Without these types of connections, children are more likely to take a similar path to their parents. For those who live in areas of concentrated poverty, this means they don’t learn about opportunities that might get them out of poverty, or about people in different income brackets.

Latasha Hunt, 36, is an example of what it means to lack social capital. She grew up in northern Charlotte, far from the wealth of the city’s south side. Her parents did ok, she told me—her mother worked in manufacturing and her father worked for the school system. But growing up, she didn’t know people who went to college or who worked in finance. Almost no one at her high school went to college—they all ended up getting a job right out of high school, or going to jail, she told me. Neither Hunt nor her two brothers went to college. Her brothers are both barbers, she now works in customer service at a local nonprofit. She doesn’t think she’s better off than her parents were.“My generation is struggling,” she told me. “We work every day, but it’s like we’re working just to pay for daycare.”

Hunt is a single mother, which creates its own unique challenges. She juggles taking care of her two children and working a full-time job. Many other women in Charlotte experience similar issues; in North Carolina, 65 percent of African-American children live in single parent families, according to the Kids Count Data Center from the Annie E. Casey Foundation. Jackson, who moved from Philadelphia, told me she lost her job in Charlotte because of “single mom stuff.” She was frequently tardy to work because she had to drop kids off at school or pick them up when they were sick, attend parent-teacher conferences, and otherwise take care of her family….Read the Rest Here…

The problem being it leads to even more questions.

My question is about the Gun that was supposedly found…

It looks one hell of a lot like a Cop “Holdout” gun from days gone by. It would be heavy, difficult to conceal…and a good way to blow your foot off due to the single safety system. It is a Smith and Wesson, which at one time was pretty standard issue in Police forces in 380 Auto. 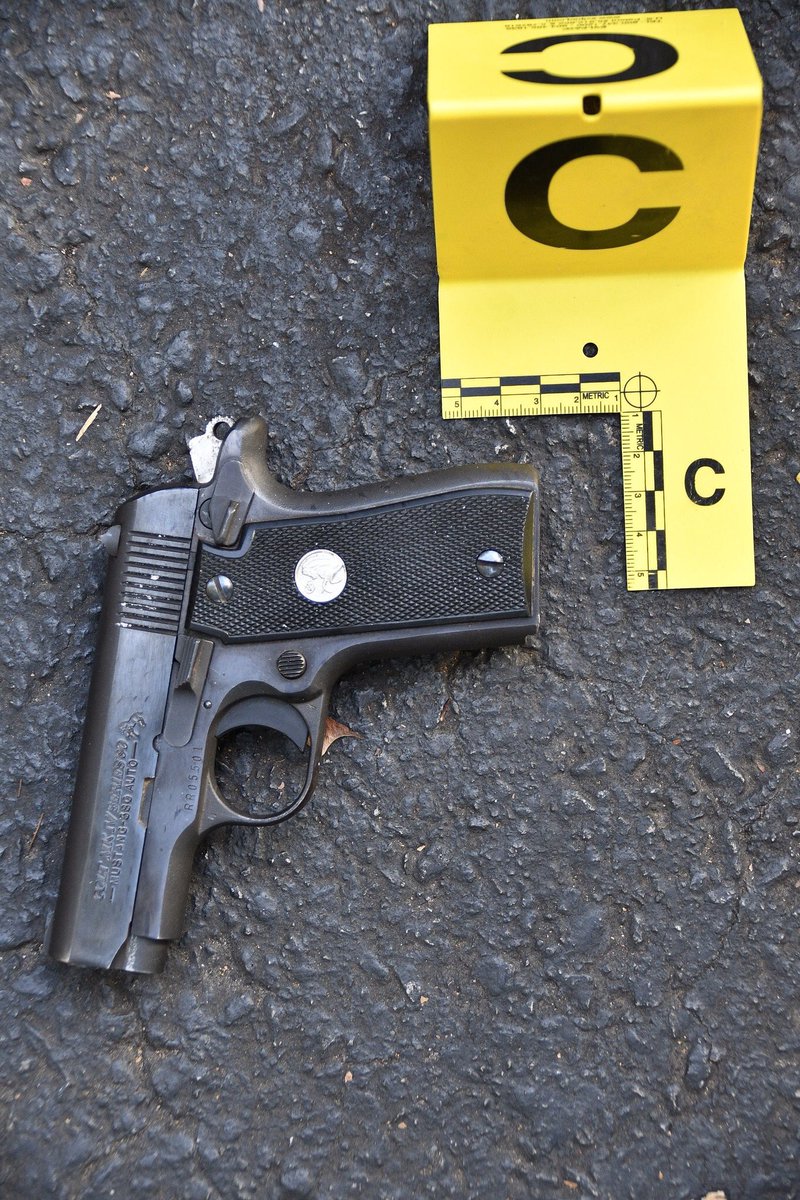 I lean towards the gun being a plant at this point. As to the Blunt…That kind of puts the icing on that.

Posted by btx3 on September 25, 2016 in BlackLivesMatter

And Your Network Too! Faux News Becomes Accountable

In the beginning, there was supposed to be a separation between Fox Local News and the Fox Cable News networks. And that worked well for a number of years as the local over the air news channels became some of the best in the business – while the cable operation perused right wing and racist propaganda.

The result of that is increasing suspicion and disrespect for the News organization, as it is increasingly seen as an arm of the same monster.

I expect things will be getting increasingly hostile and dangerous for Fox News crews.

By now, I am sure many of my readers have heard about the shooting of Keith Lamont Scott – who the Police claimed had a gun.

The reason I don’t believe the Police story is this – Keith Lamont Scott had a child in Day Care in the building adjacent to where he was parked. He regularly picked the child up there on his way home. He had been seen there by numerous witnesses previously, sitting in his car waiting for the the children to be released, often reading a book. At least one witness claims that was just what he was doing on the afternoon when Police mistook him for another man they were looking for for a crime…And shot him.

I just don’t see a Dad, waiting for his kid either 1) wanting to start gunfire around his child, or  2) Carrying a gun to the daycare center. And if the guy isn’t guilty of any crime…

Another bad Cop…Another murder in my view.

Posted by btx3 on September 21, 2016 in BlackLivesMatter

Looks like MJ has locked on to a new Beau…

Now… If he can just find a coach.

One of Charlotte’s most eligible bachelors is now engaged, NewsChannel 36 has learned.

One website is reporting the couple is celebrating on a private yacht overseas.

Jordan was married for 17 years to wife Juanita, but the couple divorced in 2006. They have three children.