Why Does The FBI Ignore The Council of Conservative Citizens Hate Group?

The C of CC is probably the most prominent hate group in America. They count and have counted as members people like former Senate Majority Leader Trent Lott of Mississippi, former RNC Chair Haley Barber, and a host of other Republican politicians. It would seem that those relationships have shielded the organization form the just scrutiny of the DOJ and FBI…Sometimes referred to as the KKK in suits, the C of CC advances and agenda no less toxic than the other white supremacist groups.

So, if looking for culpability in the organization which poured hate into Dylaan Roots head – you need to aim a little higher at the Republican congressmen and Senators who actively resisted the FBI stepping in on their friends and partners. 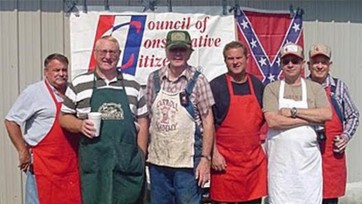 The feds say they didn’t investigate the group that helped inspire the killer, but even hate speech is free speech—until it promotes violence.

The Federal Bureau of Investigation said it did not investigate the hate group that inspired Dylann Roof to kill nine black parishioners in Charleston, South Carolina last year.

FBI spokeswoman Jillian Stickels told The Daily Beast that there is no record of an investigation into the Council of Conservative Citizens. This comes after The Daily Beast requested FBI files on the group through the Freedom of Information Act. The FBI did not respond to requests for files on the CCC’s most prominent leaders.

The FOIA request also covered one week following the June 17, 2015 attack, indicating that the FBI wasn’t looking into the group even after it was revealed that Roof cited the CCC in his manifesto.

Roof wrote that he Googled “black on White crime” and found them.

“The first website I came to was the Council of Conservative Citizens. There were pages upon pages of these brutal black on White murders,” Roof said, adding that more research led him to “fight” a race war.

After the Charleston shooting, the CCC’s webmaster first said the FBI was looking into suspected ties between him and Roof, and then later denied being part of any investigation.

The Council of Conservative Citizens was founded in 1985. It was meant to be a successor to the White Citizens Councils formed to oppose desegregation following the Supreme Court’s 1954 Brown v. Board of Education. (Justice Thurgood Marshall called the councils the “uptown Klan.”) The FBI maintainedextensive records on the earlier Citizens’ Councils, particularly in the ‘50s and ‘60s.

But the practice apparently did not continue, despite inflammatory statements from the new CCC. In the 1980s, the CCC called blacks “genetically inferior.” In 2001, the CCC website said, “God is the author of racism. God is the One who divided mankind into different types. Mixing the races is rebelliousness against God.”

Racist statements don’t automatically trigger an FBI investigation, of course. What’s usually needed is a link to a threat of violence or criminal activity. Recent prosecutions of ISIS members show that the government may investigate and prosecute people for as little as re-blogging an image that calls for violence.

Other hate groups have been investigated by the FBI, according to the Southern Poverty Law Center, including the Aryan Nations, the National Alliance, and several neo-Nazi groups.

From the C of CC Newsletter

The director of the SPLC’s Intelligence Project speculated the CCC was not extreme enough to worry the FBI.

“It may be that they considered the Council to be too mainstream to investigate,” Heidi Beirich said. “After all, several GOP lawmakers including Trent Lott were very close to the group in the 1990s.”

The CCC was co-founded by two Democrats, former Georgia governor Lester Maddox and former Louisiana congressman John Rarick. Republican senator Trent Lott spoke to the CCC at least five times, as did Republican congressman Bob Barr in 1998. Mike Huckabee, another Republican, delivered a videotaped speech to the group in 1993 when he ran for governor of Arkansas.

Tony Perkins, president of the Family Research Council, and prominent Republican supporter at a C of CC meeting in 2001

This historical one, just for fun –

Posted by btx3 on January 13, 2016 in The Definition of Racism, The New Jim Crow

How Dylann Root Learned to Hate

Kirsten Powers destroy O’Reilly’s strawman arguments one after another. As usual, O’Reilly resorts to bluster. Other Faux News hosts are more direct…

Dylann Root the 21 Year old man who massacred 8 black churchgoers last week was introduced to the language, code, and basis of hate by people like O’Reilly, and the daily dose of racism from Sean Hannity on Faux News. Those of you who participate or read online boards on any subject having to do with race are familiar with the conservative and Republican memes on race…

They are the same as Dylann Roots.

…It gives the lie to the ruling conservative meme that Roof was just a loan wacko with no affinities with the white-militia movement that the respectable right has tried to keep offstage. It also shows how the accused killer of nine in a Charleston church has roots in weird ideas that are part of even the think-tank culture of the right: Roof’s manifesto is a kind of distorted, funhouse-mirror reflection of Tea Party-era conservative white America’s core beliefs, and it shares the ahistorical way many conservatives deal with race…

1. Trayvon Martin was a dangerous thug and George Zimmerman was right to kill him.

Roof writes that from the Wikipedia entry on the shooting,“It was obvious that Zimmerman was in the right.”

2. Law and order in this country is threatened by dangerous, murderous blacks.

“The first website I came to was the Council of Conservative Citizens. There were pages upon pages of these brutal black on White murders.”

3. Blacks are obsessed with race; they won’t stop talking about it.

“Black people view everything through a racial lense. Thats what racial awareness is, its viewing everything that happens through a racial lense. They are always thinking about the fact that they are black. This is part of the reason they get offended so easily, and think that some thing are intended to be racist towards them, even when a White person wouldnt be thinking about race.”

“I have read hundreds of slaves narratives from my state. And almost all of them were positive. One sticks out in my mind where an old ex-slave recounted how the day his mistress died was one of the saddest days of his life.”

5. Segregation was not so bad, either.

“Segregation was not a bad thing. It was a defensive measure. Segregation did not exist to hold back negroes.”

“Anyone who thinks that White and black people look as different as we do on the outside, but are somehow magically the same on the inside, is delusional. How could our faces, skin, hair, and body structure all be different, but our brains be exactly the same? This is the nonsense we are led to believe,” he writes. “Negroes have lower Iqs, lower impulse control, and higher testosterone levels in generals. These three things alone are a recipe for violent behavior. If a scientist publishes a paper on the differences between the races in Western Europe or Americans, he can expect to lose his job.”

Now, just about all of this stuff sounds pretty extreme when coming from Dylann Roof, who stands accused of heinous crimes to which he has reportedly confessed. But they’ve all, in some form or another, been heard in establishment or mainstream parts of the U.S. conservative movement. The George Zimmerman defense, which was supported by many conservative talking heads, has its roots in the larger “blacks threaten law and order” belief, an outgrowth of the GOP Southern strategy that dominated Republican politics for decades — the patrician George H.W. Bush (with Atwater’s help) struck gold there with his Willie Horton ad.

As an example, a few of the posts from the political section of the Magazine “National Review” and an article entitled “Step Aside, Reverend Al: The Next Generation of Race-Baiters Has Arrived”

Posted by btx3 on December 21, 2010 in Stupid Republican Tricks, The Post-Racial Life

Black Thor Has Conservatives In a Tizzy!

Oh My! What if they made a movie based on a Shakespeare fiction, converted into a comic book fiction about fictional Norse Gods…

And one of the gods turned out to have a decidedly southern tan?

Egads! Diversity amongst the gods?

A far-right group is calling for a boycott of the upcoming Thor movie because a black actor has been cast as a Norse god. Idris Elba plays the god Heimdall in the superhero movie, a casting decision that the Council of Conservative Citizens says is an “insulting multi-cultural make-over,” Gawkerreports.

Marvel Comics is known for its support of left-wing causes and “has now inserted social engineering into European mythology,” complains the group, which opposes inter-racial marriage. Elba himself addressed the issue earlier this year, the Guardian notes. “Thor has a hammer that flies to him when he clicks his fingers,” he said. “That’s OK, but the color of my skin is wrong?”

Next they will be claiming all sorts of nonsense, like there were black confederates! Just the sort of thing to sour a Secession Ball, indeed…